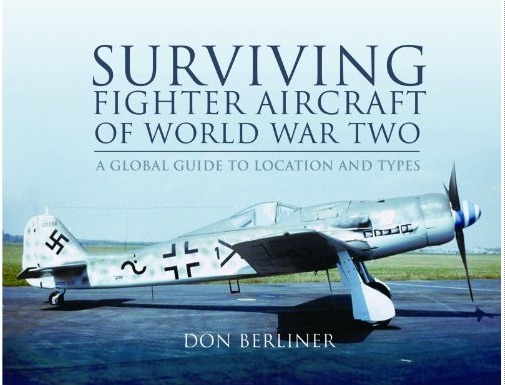 To generalize, World War II started with fabric-covered biplanes and ended with turbojets. In other words, a lot happened in just a few years. Consider: of the over 1.5 million aircraft of all types built since the Wright brothers, half were used in or built for and during WWII. Saying that over 4000 of them survived may sound like a lot—but it’s only about 0.5%!

And some more numbers: all these aircraft were divided into roughly 500 basic types (i.e. not counting derivatives) and examples of 60% of those type are still today extant, even if only in one single copy. And those are the aircraft Berliner, a prolific US aviation historian, will be presenting in a series of three books. The first one covers fighters, the second bombers (ISBN 97818488454590), and the third everything that doesn’t fit the first two categories along with various odds and ends, special-purpose planes, research aircraft etc.

Now, before you think that you may want/need only one of the three books, consider that this division may be good in theory but not so much in practice. Some aircraft had more than one purpose—just think of an obvious example: fighter-bombers. Rather than listing such aircraft more than one time, i.e. in more than one book, Berliner is listing them by primary function in whatever book they best fit. This’ll keep you on your toes.

Another thing that will keep you on your toes is that the aircraft are listed by type number (P-26, P-35 etc.), in ascending order. This means that merely knowing that an aircraft was a Boeing or a Northrop is not going to get you anywhere unless you know its type number. There is no Index either, but there is really no pressing need for one except that by showing all entries on one or two pages it would be easier to scan them at a glance rather than thumbing through the book.

The dust jacket and press release will probably cause some confusion. They say that each spread contains a “colour photo of an example of the aircraft as viewed in an aviation museum, examples of different marks (wartime shots in mono) and a textual resume of the type with statistics.” If you took that to mean that each aircraft is shown in color, and/or that to each aircraft is devoted at least one full spread, you’ll find that this is not so. And although “museum” does most often imply a static display, some of the airworthy restored craft are shown in actual flight. So, figure a page or two of text and photo/s per aircraft.

The text covers, as applicable, basic information about the maker, a discussion of the type in question, and reference to derivatives. Basic specs (dimensions, speed, range, ceiling) are listed for all entries, sometimes also weight, rate of climb or other parameters of particular relevance to certain types. Lastly, the location/s of surviving craft is given; international readers may find the lack of country abbreviations a needless obstacle. (Will someone in Japan really know where in the world “North Weald” is? Do you?)

The aircraft are listed by country (US, UK, Australia, France, Czechoslovakia, USSR, Poland, Holland, Finland, Germany, Italy, Japan). Appended is a headcount, by country and type, of how many of each basic type (including prototypes) were built. The countries listed here are not the same as in the general text and add Belgium, Yugoslavia, Roumania, Switzerland, and Turkey while omitting Australia.

As many books by this publisher, this one is in landscape format but no photo is wider than half a page. Not one photo is captioned. Obviously you’ll know what type you’re looking at by the entry the photo accompanies but you will not know what sub-type is shown. It would be understandable not to have identified the period or war-service photos by unit markings or theater of operations etc. as that level of detail clearly exceeds the purpose of this book. But not to disclose where and when (or by whom, if it matters) a photo of a survivor was taken kind of defeats the purpose.

When completed, the trilogy will encompass about 350 basic and 150 sub-types. As Berliner says, now, 65 years after the war, finding more survivors is becoming less and less common. Imagine the excitement then when in December 2011 scuba divers in Florida diving at a random location discovered in 185 ft of water a mostly intact WWII dive bomber, probably a Curtiss Helldiver SBC2. It had been two years since the last SBC2 had been found, off Hawaii and while a handful of this rare bird are under restoration, only one is currently airworthy.

Custom Motorcycles »
« Form Follows Function: The Art of the Supercar