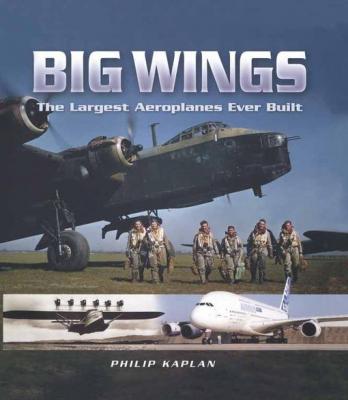 “While generally sound in concept, engineering, design, and construction, some of the world’s largest aircraft have been produced with so many mechanical, electrical, electronic, hydraulic, and other faults, that much of their lifespans were consumed in costly efforts to find and fix these problems.”

This is a high-level (meaning: not micro-detailed) look at 23 answers to the question of how to fly farther, higher, and carry more weight without running out of fuel, be too big to land anywhere, or require other construction features that negate the point of the whole exercise (wings that buckle, tires that burst, disgorge cargo without specialized equipment etc. etc.) The list of potential problems is long, hence the quote above.

This is neither a new topic nor the only book about it but Kaplan has an angle: he is an art director. In fact, he typeset this book, and there is hardly a page in it that doesn’t have something “arty” in the margin. From propaganda posters to cartoons and quotes by movie actresses to Mahatma Gandhi, a wealth of ancillary material adds pizzazz—even if it’s not always s clear what anything has to do with anything (“The future is not what it used to be.” Yogi Berra), except in the widest possible sense of crisscrossing the globe (“Never go abroad. It’s a dreadful place.” Earl of Cardigan). You might even pick up a new joke: “Everybody’s a pacifist between wars. It’s like being a vegetarian between meals.” Colman McCarthy.

The need nowadays for heavy-lift air transport is only growing (airships will come back!) so a look back is never wasted. Divided into four categories (details below) the book takes a more or less chronological approach, describing one aircraft at a time. The text is very approachable, precisely because it stays away from the engineering minutia, and deftly describes the contexts in which these machines were hatched, the expectations for them, and how they delivered. A famous example of an old aircraft still earning its keep is the majestic Mars flying boats on firefighting duty.

Kaplan obviously wouldn’t have picked the aircraft he includes here at random. In the absence of a foreword an early selection may offer a clue to his thinking. The Short Stirling is remarkable in that the project was doomed before it was ever bolted together, not through any inherent shortcoming but because “military planners” decreed that the new plane had to fit into the old hangars—never mind that this required a smaller wingspan which consequently necessitated all sorts of other compromises. One would like to think that Kaplan picked that aircraft for that reason; he certainly knows the subject matter well enough, having published on aviation and naval matters to quite remarkable acclaim: a quarter of a million copies of less than a dozen titles. In plain English, writing one book that finds 10,000 readers is harder than writing 10 books that find 1000 each! There is, just to nip any misunderstandings in the bud, nothing “populist” or watered-down about this book. It’s all properly researched and not riddled with obvious mistakes; it just doesn’t spell out every little thing.

For readers familiar with this publisher it is worth saying that this book is at 9 x 10.5″ larger than their normal offerings. The illustrations come from a wide variety of sources, and that’s without even considering the realia. Decent index.

This is about as ideal a book to give as a gift to pretty much anyone with an interest in the world around them—if you can bring yourself to part with it.