The Lancaster and the Tirpitz 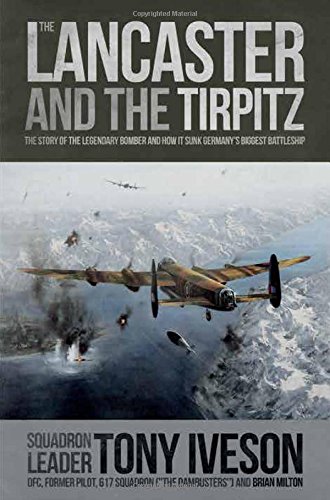 “The average age of the Lancaster’s pilots was 22 years old; there are so few left who can relate their first-hand experiences of the great bomber and those there are we have dubbed the Last Witnesses. The overwhelming majority of them were not full-time professional airmen but civilians in uniform.”

One of those Lanc pilots, who would go on to become an RAF Marshal, puts a sharper point on that, saying in the Foreword: “There are not many of us left now, with experience of flying and fighting in it. In another few years, inevitably, none will be left, and historians will be able to throw their opinions around with the insouciant knowledge that those of us who were actually there will not be able to contradict them.”

At the time of this book’s publication in 2014, that fraternity of Last Witnesses already numbered one fewer: its author, who had taken part in the Tirpitz raid, had died in 2013, but not before accomplishing something far more important than writing two WWII books. Already an old man, 79, he took up the Chairmanship of the Bomber Command Association in 1998 and devoted all his energies to correcting one of the most shameful sins of omission of the British military and political establishment: the failure to erect a proper monument to the 55,573 aircrew and civilians killed during the war. Bomber Command had in fact been the only branch of the military to not even be awarded a campaign medal—all thanks to the very man (Winston Churchill) who had pinned all his nation’s hopes on the ability of its air services to obliterate the enemy not having the moral fiber after the war to shield his warfighters from the political fallout over such controversial RAF tactics as the utterly shocking firebombing of Dresden. Thomas Clifford Iveson DFC AE did for ten years the work of Sisyphus lobbying supporters and securing funding to make the memorial a reality. It was opened by Queen Elizabeth in 2012; Tony died the next year after months of struggling against what co-author Brian Milton calls the “dying of the light.”

Why dwell on all this in a book review? It explains why this book contains both more and less than one is lead to expect from a title that on the hand seems vastly specific—the Tirpitz episode—but on the other hand gives no indication of the several other matters the book touches on. Iveson had a lot on his mind, about the Lanc and Bomber Command, and war and youth and age. But, surely, the only reason the Tirpitz angle is singled out in the subtitle is because 2014 is the 70th anniversary of the boat’s destruction and several other new books have been published to commemorate the event.

This new book cannot fail to bring to mind the 2009 book by the same author team, Lancaster: The Biography (ISBN 978-0233002705). It too was written predominantly from only the pilot’s perspective (as opposed to including other crew stations) and a focus on operational matters rather than aircraft specifics. The Tirpitz dominates only two of the 25 chapters here and offers practically no insights from its perspective but Iveson does address, using German sources, the almost inconceivable chain of communication and tactical blunders—which resulted in inquiries and court proceedings—that left the German battleship without air support the day of the fatal RAF attack. Entire books could be written about what Iveson summarizes in one sentence: “I am extremely grateful for all that went wrong on Bardufoss [the German fighter base] that day.”

What this means is that this book is best read alongside other histories, especially if the majestic Tirpitz is an area of interest. Naval folk will particularly be frustrated by the lack of context in the explanations of the tactical reasons for the boat’s location or any mention of the doctrine behind what is known in naval warfare as a “fleet in being.” None of this prevents Iveson’s account from having impact and being engaging or being a relevant piece of the Big Picture

There is one exploded view of a Lancaster, but printed on soft rather than coated paper so the callouts or even structural details aren’t exactly legible. Photos (only two of the boat, plus a painting!) are bundled into two stand-alone sections; there are no overall maps or of the various fjords in Northern Norway in which the Tirpitz and its support ships had lain in wait over the years. The text is well supported by many quotes, all sorts of statistics, and there is a decent Index.

The Lancaster and the Tirpitz