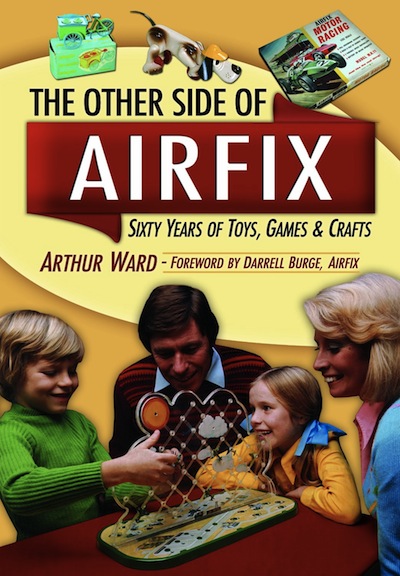 “Today, Airfix enjoys a place in that pantheon of company names that have really become nouns. We do an Airfix—make a plastic model—like we do the Hoovering. Everyone of a certain age knows that.”

Moving Parts! Super Detail! Authentic Scale! All true, but the company that would become arguably the world’s most famous construction kit manufacturer got its start with molded combs that neither had nor required any of those attributes. The combs didn’t break, didn’t snag, and were cheap to make and to buy—ahh, plastic.

Unless you were either a parent or a child in the 1950s and ‘60s you may not realize just how many toy-related product lines preceded the kit models or later were added to the Airfix Industries catalog. Not all of these were available outside of the UK so this book will probably be an eye-opener to all but the ardent collector. It is, in fact, the first, to delve in detail into the “other side” of Airfix.

It is also the first to introduce a nice tidbit to the record, revealing the contribution both as an artist and a model of one Bill Stallion to Airfix’s famous box top art. This morsel came to light in response to one of the author’s previous Airfix books of which he has now penned four. Ward (runs www.collectingfriends.com), incidentally, comes from a marketing background and is as interested in the social and political aspects of military history as he is in toys. This is a very useful combination for commenting upon a toymaker that made pacifiers and nuclear missile kits and literally millions of toy soldiers striking all manners of fierce poses.

For business-minded readers: aside from the products Airfix made and makes, it is an industrial concern like any other and as such has suffered expansions, contractions, takeovers, and bankruptcies. Particularly its modern-day history is rife with drama and Ward addresses that too in the book. To bring new readers up to speed, the Introduction summarizes the emergence of plastics and injection molding, the temperamental and visionary Airfix founder Nicholas Kove aka Miklos Klein, and the post-WW II landscape of raw material shortages and austerity. Titling chapter 1 “The Right Place at the Right Time” is perfectly apt.

These meta themes of business, relevance, and competition remain the connective tissue throughout the book. Extensive quotes and recollections from Airfix insiders add color and first-hand authenticity even if at times the book reads like a Yearbook, naming and showing people that were probably only known to their immediate colleagues. But, really, this is only right because toys are made, or should be made, by people and not by anonymous committees or focus groups.

If you remember the many games and toys and arts & crafts the book presents you’ll probably pause a lot to savor good memories; and if you’re a collector you’ll probably get way too many ideas on what else to spend money.

Very nicely and comprehensively illustrated, and pretty thorough Index too. The Foreword is by Airfix Marketing Manager Darrell Burge who has been with the company for 25 years—and still loves going to work there!