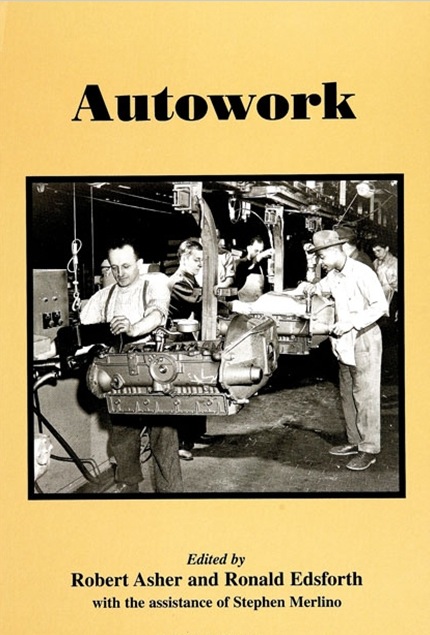 Plentiful is the literature pertaining to the early days of motoring in terms of the evolution of the actual apparatus—the car—and on many/most of the more prominent personalities on the engineering and manufacturing side. This book draws our attention to the human side, particularly the assembly-line worker’s. It covers the industry from its origins to the 1980s.

The nine essays in Autowork examine the inner workings of the physical plants, the experiences of the workers on the production line, and the reasons that led to the emergence and ultimate dominance of the UAW. The growing pains of the industry were not just related to inventing technology or coming to grips with the physical layout of plants or the logistics of how best to move materiel and components. Imagine the growing pains of a worker whose life experience consists of farm or housework. All of a sudden he or she enters a totally new, never before seen environment of strange noises and smells, danger to life and limb, and the main feature of the auto plant—the moving assembly line.

Finding a way to reduce the time for the 6 steps required in piston and rod assembly from 3 minutes to 30 seconds may be good news for management but is one of a thousand ways of causing unprecedented mental and physical stress for the worker. Bathroom breaks, the speedup, grievance procedures—everything affects the quality of the work life and everything is regimented by others. From being considered nothing more than “animate machines” in 1915 to achieving “the highest wages, pensions, health care benefits, and income security enjoyed by any group of mass production workers in the nation,” autowork has come a long and arduous way.

The essays portray working conditions as seen through the eyes of workers and union officials. They are based on transcripts of hearings, minutes of negotiations, and newspaper articles and are followed by over 40 pages of notes and a (short) index.

Asher is Professor of History at the University of Connecticut. Edsforth teaches in the History Department at Dartmouth College. Both authors have published widely on labor an cultural issues.

Also available as a hardcover.

The Life and Times of Henry Edmunds »
« 50 Years with Rolls-Royce, My Reminiscences