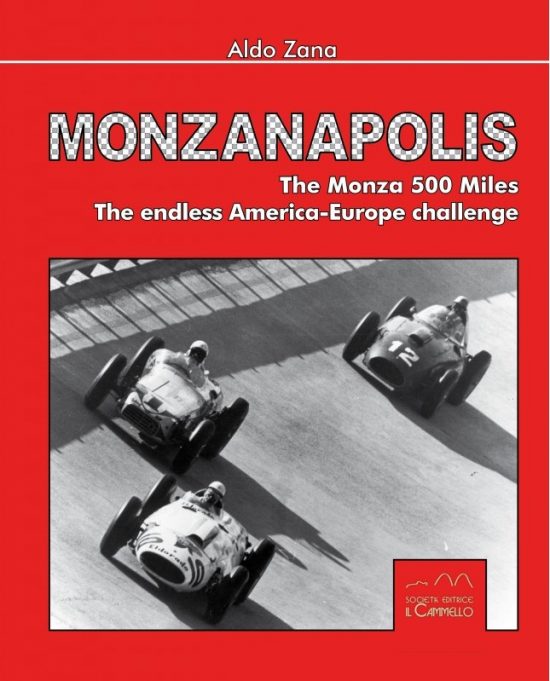 This book tells the story of the 1957 and 1958 races stretching 500 miles on the 2.6 mile high speed track at the Monza Autodromo. The aim was to have American and European drivers face off on an oval track—much like the Indianapolis 500, which explains the book’s title, combining “Monza” and “Indianapolis” into Monzanapolis. That term is not new to the book, but was probably thought to be obvious because,  aside from the title, it is not mentioned or explained anywhere in the book. What is also not apparent from the cover is the vast scope of material covered.

Author Aldo Zana understood that there was value in telling this story in context of preceding racing history. Of the 16 chapters, the first ten cover races ranging from the 1905 Vanderbilt Cup to the 1952 Indy 500. He explains it like this: “Out of the long chronicles of the America-Europe challenge, the following pages select the most significant events from 1905 to 1937. Some chapters focus on the Indianapolis 500 races, when the presence of European drivers in European cars was significant.” Then he sets the scope for the remaining six chapters covering the 1957 and ‘58 races like this: “The book concentrates on the two Monza races, regarded as the historical peak of the America-Europe challenge. It doesn’t deal with the Lotus revolution of the Sixties which reversed the American way of single-seater racing. After more than 50 years, Europeans recorded a victory over the Americans.”

The author brings decades of experience to the subject, having begun to journal his motorsports ruminations since the age of nine. The last picture in the book is of him photographing the 1968 Monaco Grand Prix—during that time he wrote for Autosprint and then for Rombo, while completing his studies for a PhD in theoretical physics. His recent books included The Monza 1000KM: 1965–2008 and Drivers from Another World for AISA (Associazione Italiana per la Storia dell’Automobile, see: aisastoryauto.it).

The flow of the material is detailed and scholarly. Each chapter ends with “Footnotes” or “Footnotes and Brief Biographies” when biographies are among the notes, which are easily spotted in boldface. There’s a slight strain in readability from a single-spaced format where the paragraphs are not indented. Fortunately the neat allocation of space around pictures, captions, and margins more than compensate for ease in readability.

Whether the reader craves the visceral aspects of racing with its stats and challenges, or where there is more interest in historical aspects with its elements of motivation, culture, and automotive design, this book delivers. So much more was added by providing a strong historical background to create the context. The race only ran in this form for two years; then it was cancelled by the organizers, explained via a quote in the book fromSpeed Age, January 1959. The author does not proceed to add conjecture or alternative motivations for the cancellation. As the saying goes, it’s the journey that counts—and that is what this book covers—and it is highly recommended for racing enthusiasts.

This review appears courtesy of the SAH in whose Journal #291 (March/April 2018) it was first printed.