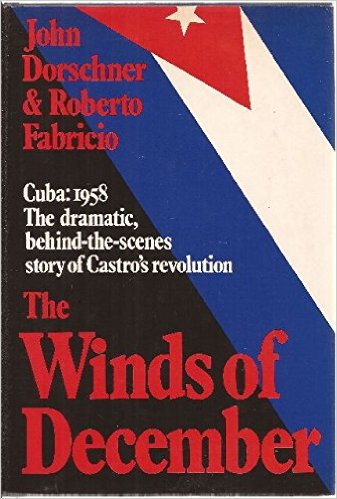 Cuba has been in the news lately so even though this book was written 35 years ago, it is still—or again—relevant. The Winds of December is so accurate and comprehensive that people who were personally involved in the 1958 Cuban revolution now use it to supplement their memories of past events. When I checked Amazon for current pricing, I noticed that modern readers give the book 4.5 stars out of five. Old rebels, as well as supporters of pre-Castro politics, recognize the book’s unbiased value as an accurate and well-written historical record of what transpired during the last 30 days on both sides of the conflict.

Much like reporter John Reed’s classic Ten Days That Shook The World (the story of the final days leading up to the October 1917 Russian Revolution), Winds captures the spirit and political realities of Batista’s exit from Havana early in the morning on New Year’s Day, 1959, and Castro’s arrival in the capital a few days later. However, unlike Reed’s openly biased account of the Russian Revolution (he was a friend of Lenin), authors Dorschner and Fabricio work hard at remaining neutral in their reporting. At the time, both were professional newsmen working for the Miami Herald, and they interviewed hundreds of people on both sides of the conflict, including a lengthy interview with Fidel Castro about his recollections of that intense time period. Where he was, what he was doing, and what he was thinking is chronicled. The authors then crosschecked with others involved in the events to verify the facts. The end result is quite likely the most balanced and unbiased factual account in existence of the revolution’s final days before victory.

Being privy to Castro’s mental processes, and his reactions to the military and political developments that spring up haphazardly during the revolution’s last 30 days, is amazing. Almost instinctively Castro seems to make the right move at the right time. He storms about, gets caught up in his own rhetoric, and follows the idealist dreams of his youth. For Castro it was all, or nothing at all. He seems certain that the purity of his cause, like a blindly held religious belief, would find a way past any obstacles to unconditional victory. Che Guevera, Celia Sanchez, and the key revolutionaries are all touched upon as they play their roles in bringing Castro’s improbable dream revolution to fruition.

Batista’s movements and conversations are also related, along with those of his entourage, as is the controversial role of the US Ambassador to Cuba, Earl E.T. Smith, and others in the State Department. The mass exodus of corrupt Cuban officials, their families, and hundreds of millions of dollars is described as Batista supporters stampede out of Cuba in hastily arranged flights. Batista was first off, after a New Year’s farewell party, at 2:40 AM, January 1, 1959. His cronies and their immediate families followed, their mental state being described by one as “a cargo of live corpses.” The party was over, not only for Batista, but for the American mobsters as well. The mob fled the sinking ship and refocused on Las Vegas, Nevada, evidently aware that the protected corruption of their casinos in Cuba was not going to be tolerated by an idealistic revolutionary like Castro.

The book opens with an Introduction and a Prologue, followed by 55 chapters, divided into four major sections, that hop-scotch the reader back and forth between the participants on both sides, and the general population in the middle. Beginning on November 20, 1958, with “Part One, The Leaders,” the book introduces us to the rebels, the US ambassador, Batista, and General Cantillo. “Part Two, The Drive To The Plains,” covers the rebels movements, the general public’s frame of mind, and a divided US embassy, among other things. “Part Three, A Regime In Ruins,” describes why the Cuban Army, and Cubans in general, basically refused to fight to keep Bastista in power, and how and why Cuban capitalists funded Castro from behind the scenes. “Part Four, The Race For Power,” beginning December 24, takes the reader through the various factions maneuvering for power. Even at this late date, just days before Castro arrived in Havana, various anti-Batista Cuban groups, both in Cuba and the United States, discounted Castro as a political leader. He might bring about the revolution, but he was not expected to be in charge of the political scene after the victory was won. At the beginning Castro said he did not want to be President of Cuba, but in the end he ruthlessly eliminated all threats to absolute political control.

An Epilogue closes out the book with a description of Castro after arriving in Havana, where he pursued his enemies “with a vengeance. In mid-January, some seventy Bastista officials were placed in front of a bulldozed trench near Santiago de Cuba and executed by machine gun. . . . It was the same everywhere . . . dozens upon dozens of police and army enforcers were shot. . . . The most sensational cases were reserved for the Havana Sports Palace, where crowds jeered and shouted.” Even “journalists sympathetic to the new regime thought the proceedings were circuses,” perhaps reminiscent of the rowdy public guillotining of royalty, and those deemed sympathetic to the throne, at the conclusion the French revolution. The fate of each of the 128 people featured prominently in the book is related. Those who didn’t end up dead ended up as everything from Miami car salesmen to the heads of Cuban governmental organizations.

In the Appendix that follows the Epilogue, the process of how and why Castro became a Communist is discussed, along with the role, or non-role, played by the US State Department. Why the US refused to sell Batista’s military forces US arms, and why a huge percentage of Cubans backed Castro without ever really knowing the man, is touched upon as well.

Notes On Sources introduces a comprehensive Selected Bibliography, which itself introduces a 21-page listing of sources used in writing each of the 55 chapters. A well-constructed Index closes out the book.

This is an excellent book. Like Ten Days That Shook The World, it has become a timeless document, and a must-read for anyone interested in the history of how the last days of Castro’s Cuban revolution were fought and won. The book does not take sides, it just tells it like it was. An amazing, comprehensive, and accurate look behind the scenes of an ultimately brutal, and simultaneously idealistic, revolution that currently seems to be ending with a general sigh of relief.

The Winds of December

The Smart Roadster – An Autobiography »
« Carrera 2.7