The Complete Book of Ducati Motorcycles: Every Model Since 1946 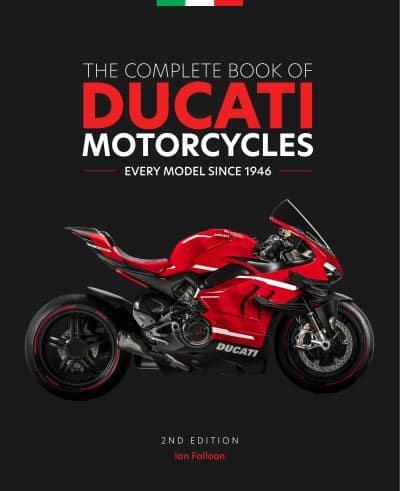 “Although I have written several books on Ducati motorcycles, to comprehensively cover every model in one volume is a challenge. Information on many early Ducatis is difficult to obtain, requiring considerable time spent pouring through period motorcycle magazines and factory publications. Fortunately, Ducati Museo curator Livio Lodi came through with most of the production data from 1960, published here for the first time and significantly simplifying the categorization of the multitude of models built in the 1960s.”

The Pope didn’t ride a Ducati but he probably had one—a Ducati radio that is. Or maybe the electric razor, the first of its kind in Italy. At any rate, it was Vatican money that together with the Italian government resurrected the bankrupt Società Scientifica Radio Brevetti Ducati, maker of  radios, cameras and lenses, movie projectors, cash registers (and let’s not forget that razor)—and a new item, a bicycle motor whose high-pitched, yapping exhaust earned it the nickname Puppy. It would become the most successful of all the postwar micromotors and set the company that once had been the second-largest in Italy on a course of more or less steady progress.

That this book is such a fine overview is beause the author has been at it a long time. Among Falloon’s (b. 1952) 45 motorcycle books on various brands are so many Ducati titles that it’s easy to confuse some with others, not least because they keep getting reprinted/revised. For instance, his first major history of the marque dates back over 20 years, to 1996, The Ducati Story, Racing and Production Models from 1945 to Present Day (Patrick Stephens, ISBN 9781852605353) and—ranked one of the 94 Best Motorcycle Books of All Time by BookAuthority—is now in its 6th edition (2018, Veloce, ISBN 978-1787110854) because the “present day” part of the title is a moving target—and Ducati is never standing still. 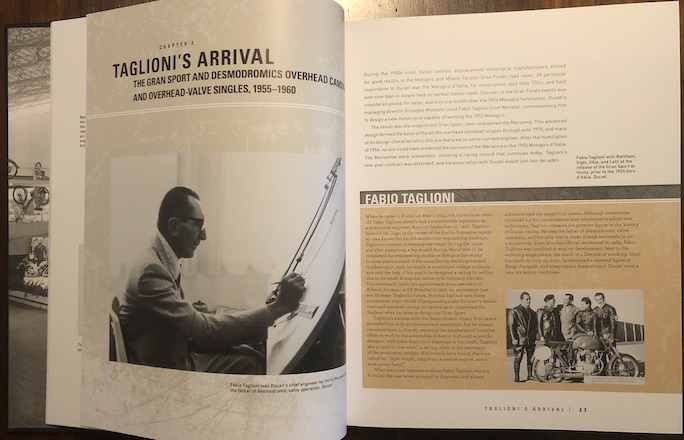 Ducati’s iconic desmodromic valve train engines might as well have been named after engineer Fabio Taglioni. His is the one personality profile among this otherwise encyclopedic treatment of models.

Similar updating applies to the book we’re looking at here, the second edition of a title first published in 2016, also by Motorbooks. It takes a similar approach to the above but, being some 70 pages shorter, goes about it differently. They cost just about the same, but for now The Complete Book has the advantage insofar as it is current to 2022.

But speaking of updating we must revisit the quote above. It is from the Acknowledgments page in this book and being dated October 2021 would lead the reader to think that the bit about the 1960s production data is new to this edition. Well, it’s not. The quote already appeared in the 2016 edition, so all of Falloon’s other Ducati books since then have benefited from Lodi’s data. Lodi is of course the ultimate Ducati source, having started on the Paso 750 assembly line in the 1980s and then becoming an accountant before getting tapped as museum curator. The latter role has taught him that most young museum visitors know nothing before the 916 model, i.e. the 1990s, so it is no wonder that he should offer his insights and resources to a broad-spectrum book such as this. 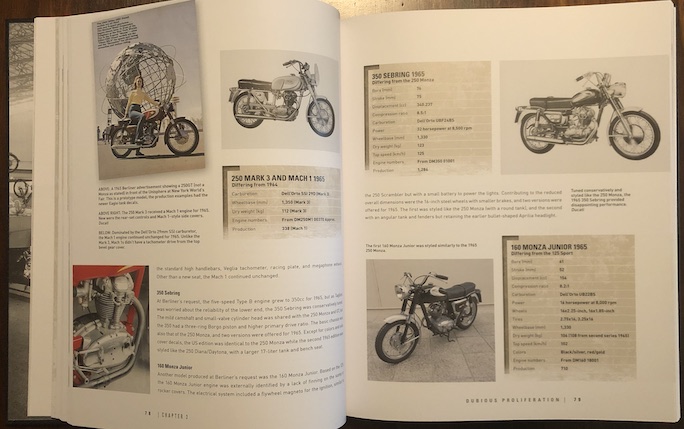 Top left: would one not expect a dealer to know his wares? Falloon knows his Ducatis so well that he can spot the dealer’s own ad got this one wrong. Good to know, because he offers an authentication service for collectors.

The Ducati story begins in the 1920s and Falloon briefly sketches out the busy pre-WWII decades before introducing the aforementioned Pup aka Cucciolo. The book advances chronologically, in sections divided by themes. If you have very specific interests, the Index will provide more guidance than the Table of Contents inasmuch as the customary A–Z portion of the Index is preceded by one that lists all the models’ numerical prefixes in ascending order. This is a supremely handy device and not at all standard procedure but of course works best only if you’re already familiar with model nomenclature. 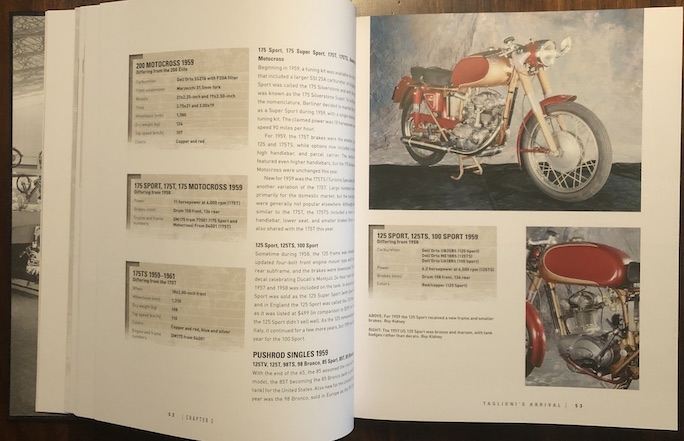 This photo illustrates an unusual aspect: almost all the spec tables will say, right below the head, “Differing from xyx” which is a nifty way keeping the tables short by only enumerating what is new but that will force the reader to page back to the referenced table and then compare.

In simplest terms, this is an encyclopedia-style model history so it should not come as a surprise that the narrative is tight, dispensing a great deal of tech talk pertaining to operating principles and design/construction features which of course implies some reference to business and personnel matters. The text is eminently readable but if you’re not a gear head, you may find your attention span taxed. There are a good number of exploded tech drawings, and spec tables for each model and variant. 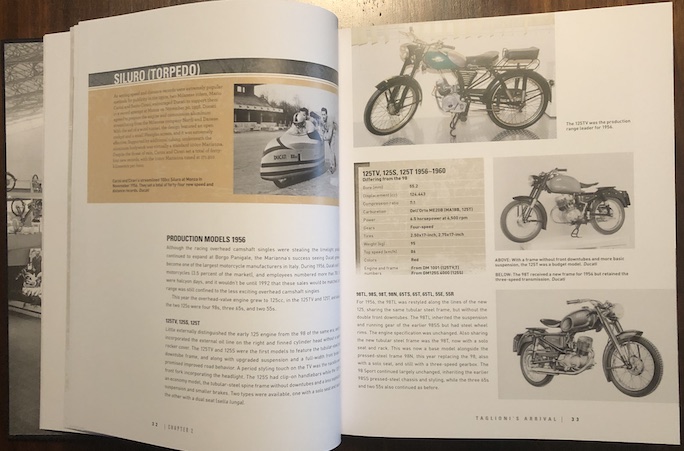 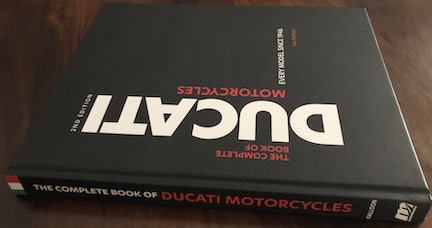 We know book designers look at our reviews so let’s talk design: this is what’s underneath the cover. Not only is there a lot of smart type placement happening, someone went to the trouble of giving the boards a carbon fiber look.

It’s one thing to be able to write competently about technical issues—Falloon has a stack of repair/restoration manuals to his name, and he has owned 50 Ducatis and heaps of other machines—but he goes similarly deep on the motorsports history side. Again the Index is eminently useful here.

While largely peripheral to this review it is interesting to ponder that what brought Falloon to writing motorcycle books was a motorcycle accident that ended his career as a symphony orchestra oboist. He still makes fine music, just of a different kind.

The Complete Book of Ducati Motorcycles: Every Model Since 1946

Toymaker: My Journey from War to Wonder »
« ROFGO Collection