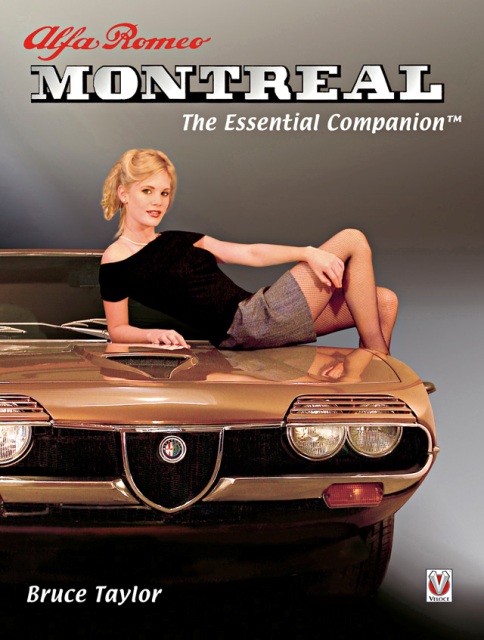 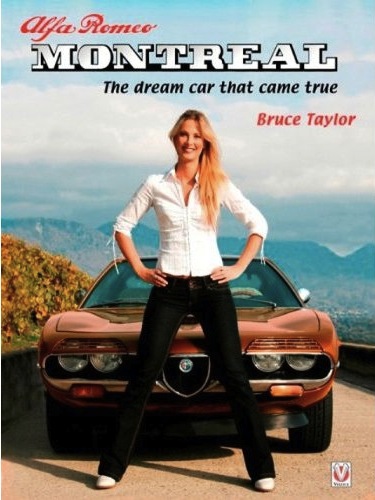 –and– Alfa Romeo Montreal: The Dream Car That Came True

Good thing the 1967 Expo was not held in Moscow as had originally been planned (until 1962 when Russia backed out and Canada stepped in). Otherwise Alfa Romeo might not have been given the brief to produce a car “to express man’s ultimate aspirations in the field of motor cars”. Even if they had, the car probably wouldn’t have been named Montreal. Whether the car actually does express man’s “ultimate aspirations” is as doubtful now as it was then. These two books won’t settle that question.

NOTE: The “Essential” book has been reprinted in May 2015 unchanged in a limited edition of 500 copies.

Compare the Alfa Montreal to another car Bertone’s young designer Marcello Gandini penned a year earlier that had similar specs (the Lamborghini Miura) and you realize that, no matter Alfa Romeo’s aspirations, the collector marketplace has been slow to embrace the 3,925 copies of the Montreal that were built between 1971 and 1977. However . . . in the seven years since the first and the reprint edition, Montreals have become seriously expensive! By correcting many of the urban myths surrounding the car’s repair and maintenance issues, Taylor’s books help redress some of these perceptions.

A retired R & D engineer, Taylor, who happens to be Swiss, is a Montreal enthusiast with a capital “E”. He is on a mission to explain the car to his fellow Montreal owners in particular and the world in general. To that end he created and runs the Alfa Romeo Montreal website and administers a Montreal listserver on the Internet. Much of what is in these books (and more) is on his website. But why fuss with fistfuls of printouts if you can have two beautifully presented books?

Originally published a year apart, they are clearly companion pieces, evidenced not least by the design of the book jackets. The Essential Companion is the first-ever book in English about just this model, and is immeasurably more thorough than any of the few existing texts, such as Giuliani’s 96-page paperback (Giorgio Nada Editore, 1992 in Italian), or De Agostini’s 33-page long out of print booklet.

Taylor enjoyed cooperation from Alfa Romeo, Bertone, Bosch, and ZF and exhibits his exemplary organization with precise and engaging writing. After telling the backstory that led to the creation of the 1967 International and Universal Exposition car, describing differences between it and the 1970 Geneva show car, Taylor touches upon every conceivable area of interest to an owner or prospective owner. A buying guide enumerates the market-specific variants, trim options, and problem areas. Tuning tips and a run-down of the car’s known weaknesses, with remedies for them, lead into the bulk of the book, which is maintenance and improvement of all mechanical components as well as interior and exterior.

Racing and club activities, even automobilia collectors are catered to with chapters about scale models, literature, artwork, and advertising. There is no shortage of photos, many of them Taylor’s own. Line art, wiring diagrams etc. clarify the technical parts. There is a special 24-page line-art section of the special Montreal tools. From torque values to Montreals on postage stamps to car values at the time of publication, it’s all here. And, not to forget, the list of chassis numbers and index. Reading the book will make Montreal ownership seem survivable and you may well end up aspiring to one. But if the $200 price (the 1st ed. was $130) of the book is a concern, don’t even think of buying a car!

The subtitle of the companion volume, published in 2009, is an adaptation of the title of the second chapter of the first book: A Dream Car That Came True. This book is much harder to classify. Where the first one had an all-serious “Just the facts ma’am” flavor, this one is rather—less. To illustrate, the chapter titles are followed by quotes, from Al Pacino to William Shakespeare. It is mainly pictorial, divided into basic themes (cf. “Exhaust,” “Glamour”, “Nature”. “Fuelling”?!?). Photo captions are the only “text” except for a general introduction summarizing a bit of Alfa history and the genesis of the car. The illustrations in this book are largely from Alfa Romeo or Bertone archives and some inevitably are also in the first book (as, incidentally, is the nice cutaway drawing of the whole car by a master of the craft, Bruno Betti). But with almost 600 illustrations, even a little duplication still leaves plenty of new material.

Elsewhere are photos from the scrapbooks of owners all over the globe, which means they’re uneven in quality and composition. Colorful. Slice-of-life. But, naturally not a fault of the book, no matter how many photos you see the fact remains: the car never photographed well. In the flesh it doesn’t look nearly as gangly and slab-sided as it does in photos!

One is true to its subtitle: essential. The second one is just nice to have.