The History of the Willys Overland Crossley GmbH from Berlin-Adlershof 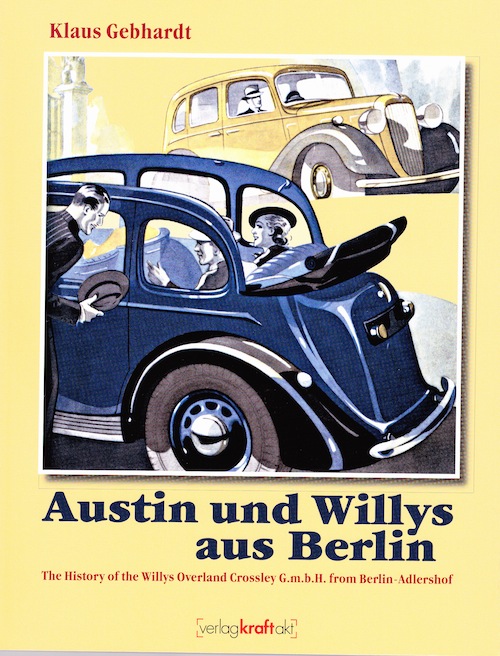 (German, English) As far as I know this book has brought together information that has not appeared in book form before—the strange alliance between the firms of Crossley, Willys, and Overland who, in turn, built (amongst other cars), the Austin 7 in Germany from 1932. The author (b. 1936) owned some of these cars and that prompted him to dig into their history.

The British firm of Crossley is well known. During WW I the Crossley works at Heaton Chapel near Stockport built aeroplanes. After the war this large factory was lying idle.  “For peacetime production, Crossley Motors were planning to manufacture cars there, which should lie clearly in size and price under their present models. As a solution a collaboration with Willys Overland from USA was envisaged.”

The first cars came over from Willys in Canada as kits to be built up in the UK and fitted with British coachbuilt bodies. Later it was decided to set up similar factories in Holland and Germany. The author cannot find any trace that the Holland project ever came to anything. In 1927 the company Willys Overland Crossley GmbH was registered and factory buildings near the airfield at Adlershof were purchased. In the summer of 1928 the 1000th Willys Knight and Overland Crossley left the production line.

The famous Austin 7 had been built under license in a number of countries; in Germany it was manufactured by Dixi and then BMW-Dixi.  From 1927 to 1932 some 25,000 Austin 7 cars were built in Germany. When BMW negotiated their way out of the contact, Willys Overland Crossley took it up. Later the Nippy and the Speedy sold well in Germany. However the author has deduced from what little paperwork that still exists, that between 1932 to 1939 only 700 Austins were built at Adlershof, well below figures for the other makes in the conglomerate.

I sympathize with the author who found that relatively few factory records exist. He has however made an interesting and well-illustrated book. It is in two languages, German and English, but this is not at all confusing. Some of the Austin brochures reproduced are naturally only in one language.

The History of the Willys Overland Crossley G.m.b.H from Berlin-Adlershof

Posted Under: Automobiles, Multilingual / Not English, US | Author: Other | 1 comment

The Ferrari Book »
« Still Life with Cars, An Automotive Memoir