Fast Jets, The History of Reheat Development at Derby 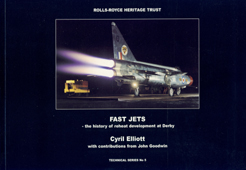 by Cyril Elliott, with contributions from John Goodwin

Number 5 in the Rolls-Royce Heritage Trust Technical Series, Fast Jets is a must-read for folks who enjoy high performance gas turbines. The mention of Derby in the title refers to Derby, England where Rolls-Royce aircraft engines have been developed since this famous company got involved in aircraft engine development in 1914. Consequently, this book only covers those reheat applications developed at this location.

Like me, you probably thought that afterburning, or reheat in English speak, was simply a question of dumping a bunch of kerosene into the tail pipe of a jet. Think again. But it must be added that even Lord Hives had the same misconception I had. Reheat development took an inordinate amount of painful effort with almost the same number of problems one would associate with engine development proper.

Rolls-Royce entered the treacherous field of gas turbines with the Derwent. It should be noted that all Rolls-Royce gas turbines were and are named after rivers, the Derwent being a river  in the midlands of England. Entering production in 1944, the Derwent powered the Gloster Meteor. As always in military powerplants, too much power is just enough, in other words there is never enough. So experiments were conducted with injecting fuel into the tail pipe. From these beginning stages, Rolls-Royce went on to develop many reheat designs for military applications. Of course, describing engine development has to go hand in hand with overall aircraft development. By the jet age, more and more emphasis was placed upon the powerplant, how it was mounted and catering to all its needs.

This book is strictly for those who enjoy the technical aspects of gas turbines, no wimps allowed. Obviously, it is focused on reheat but don’t be fooled into thinking there is not much to it. To emphasize that point, this book should receive an honorable mention in the Guinness Book of Records for having the largest fold-outs of any book in print. Some of the them measure a staggering 60 inches wide—and this just illustrates the reheat part of the engine. These massive fold-outs, many of which are in color (a rarity in RRHT publications), need some studying to figure out what’s going on but after a while it’s possible to understand the myriad schematics illustrating fuel, hydraulics, compressed air, electrical systems, etc. Although the illustrations fall in roughly the appropriate part of the text, it would have been helpful to the reader if the illustrations had been actually referenced in the text. Nevertheless, the photographs and illustrations are absolutely first class.

Author Elliot goes through the various developments that took place in Derby chronologically. He covers all the gas turbine developments up to the Spey, used in the F4 Phantom. The F4K variant of the Phantom has been described (not in this book, I should add) as being the slowest, heaviest, and thirstiest of all the Phantoms. However, when you look at the task facing Rolls-Royce engineers, it was a miracle it was even pulled off at all. Even so, excellent insight is offered in the horrendous design and engineering problems that had to be overcome in shoe-horning a Spey into a Phantom airframe. After the Phantom episode, Elliot was reassigned to other tasks and the book was turned over to John Goodwin who takes us through the Adour development phase and its numerous sub types powering the Jaguar.

A nice Appendix 1 lists all the Rolls-Royce reheat engines including performance and applications. Appendix 2, put together by Dave Birch who also edits the Rolls-Royce Heritage Trust Derby Branch magazine, Archive, describes all the aircraft test-flown by Rolls-Royce in reheat development.

Again, this is a must-buy for those interested in gas turbines. The fold-outs alone are well worth the incredibly low price.

Fast Jets, The History of Reheat Development at Derby

by Cyril Elliott with contributions from John Goodwin

Posted Under: Aviation, Technology | Author: Graham White | No comments yet