The Magic of a Name: The Rolls-Royce Story, Part 1: The First Forty Years 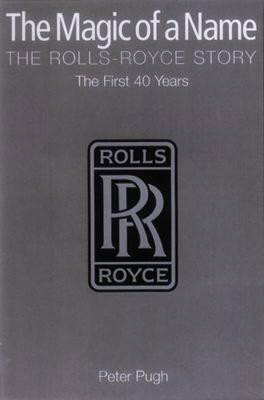 If you associate the name “Harold Nockolds” with a book of this title, you are making the right connections but this is not a re-edition of Nockolds’ 1938 classic that covered the first 34 years of Rolls-Royce history. Even his third and final edition published in 1972 did not deal at length with the firm’s history after 1950 and deferred further discussion until a future edition—that never materialized.

Nockold’s original publisher had been Foulis, which had been acquired by Haynes Publishing, and Haynes granted Pugh permission to revive the title because, conceptually, Pugh’s book is indeed the “successor” to Nockolds’ work and is the first comprehensive history published since 1972. Much has transpired since then, so much that even Pugh cannot contain it all between the covers of one single book. A second tome (The Power Behind the Jets) appeared in 2001 and a final, third one (A Family of Engines) appeared just in time for the storied firm’s centenary in 2004. Volume I, the one reviewed here, breaks off around 1945, the dawn of the turbine engine, just after the Gloster Meteor and its R-R Welland engine make an appearance.

It should be said first of all that this is not a book about cars. It is a corporate history and mentions Rolls-Royce product only inasmuch as it helps tell that story. And on that count, beginning with the Great War in 1914 and the firm’s somewhat involuntary involvement with aircraft propulsion, the book’s focus shifts in considerable detail to aero engines. Motorcars are dealt with only peripherally.

Pugh, it should be noted, is not a specialist Rolls-Royce scholar but read History at Cambridge, has some 30 business books to his credit, and is Managing Director of Icon Books. He wrote this book at the behest of Rolls-Royce’s chairman at the time, Sir Ralph Robins. The book contains “hitherto unpublished photos,” largely from the holdings of the Rolls-Royce Heritage Trust. It presents new material unearthed, for instance, at the archives of Gilbert, Segall and Young, R-R’s legal advisers in New York and R-R Allison in Indianapolis. This seems an opportune juncture to put in a little barb and say that it is regrettable that no important books on this subject have flowed from the pens of US authors. There are treasures squirreled away in dusty archives in this country—if only somebody went looking!

Pugh’s book has two user-friendly features. One is a 32-page section of short biographies of 73 of the recurring players in the firm’s history. The other is a paragraph early in the book about “The Value of Money.” It explains the formulae the author used throughout the entire book to translate old prices into present-day figures. It would help even more if the reader had an “affordability index” to relate, for instance, the purchase price of a car or the annual salaries of the time to the cost of other common commodities.

The “bibliography of books consulted” contains some 130 titles of all the well-known and well-thumbed standbys of Rolls-Royce history. The author claims credibly to have consulted them all. This is evidenced by extensive quotes. The book is, in fact, presented much like an academic paper: thesis and antithesis are cited, their merits assessed, weaknesses exposed, and synthesis formulated. The train of thought is laid out in front of the reader. The methodology and scholarship are sound and the overarching integrity of the research such that a plausible, persuasive picture is painted. On the micro-detail level there are always aspects that cannot be definitely, conclusively settled, but it would be presumptuous to expect that of any one book. More on that later.

In a way, the reader who is likely to benefit most from this book is the one who knows the least. Everyone else will be driven to distraction by bits and pieces, facts and factoids being summoned from the recesses of one’s mind. The trouble with knowing the literature is, of course, that not every author is equally “right.” Starting with a clean slate and an uncluttered memory spares one the mental gyrations of having to “unlearn” things that, heretofore, were taken as gospel. But that is exactly why we need new books and fresh research.

The book does not have much of a critical apparatus. For anyone but the casual reader it would have been useful to have the sources of personal letters and memos cross-referenced to the bibliography or a separate index. Without even knowing where such primary sources are held now, independent verification and follow-up are impossible. The Index is sufficiently detailed but contains no photo references. However, the photos themselves are exhaustively captioned. They are not interspersed with the text but, being printed on different paper stock, are gathered into seven sections. If one really needs to see an engine that the text describes in great detail, one has to resort to random page flipping to find a corresponding photo—if there is one.

Editing and proofreading could hardly be better and are several cuts above of what, sadly, seems to have become the norm. Readers who already know some Rolls-Royce history will realize that the firm once owned Bentley Motors. Looking at the world through Bentley-colored glasses, one way to “shake down” a new book is by checking how it treats one of the darker moments of R-R history, the fateful year 1931 in which Bentley went under. Ch. 5 begins with a section called unprosaically “The Buying of Bentley.” The Bentley contingent will slog through those pages with gritted teeth and furrowed brow. One sentence in particular is likely to raise blood pressures to danger levels: “In the event, as we saw, at the last minute Rolls-Royce bid more than Napier for the company, and Bentley became part of Rolls-Royce.” [p. 124]. This is, of course, true—but it is not all. If a reader only looked through the Index—after all, this IS what it is for!—and found no reference to certain known events, one would be forced to conclude that the book is tendentious. Of all things to be missing from the Index, it is truly regrettable that there is no entry for the British Central Equitable Trust Ltd., the until-then unknown company that acted as a front for Rolls-Royce. Ironically, the author does mention the Trust on p. 59, much earlier in the book, in the context of Napier’s struggles. Here, intelligent cross-referencing and indexing could have saved the day. It would be a shame to have dismissed a perfectly good book over a perceived credibility issue.

The title, incidentally, is based on the poem Pleasures of Hope by the Scottish poet Thomas Campbell [1777–1844] whose work inspired the tile of yet another Rolls-Royce tome, Warren Allport’s 1963 book The Power of Grace.

British Warships in the Age of Sail 1603–1714: Design, Construction, Careers and Fates »
« Lady’s Men: The Story of World War II’s Mystery Bomber and Her Crew