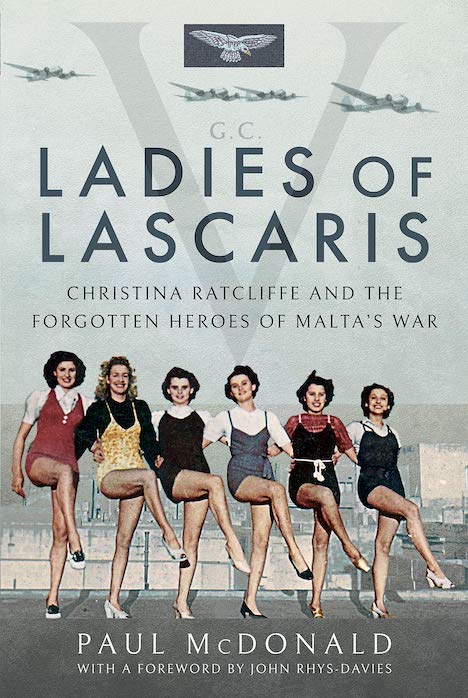 “It is a near certainty Christina read “Warburton’s War” when it was released in 1987. Was she surprised or disappointed by any of its content? With the story she herself was writing left unfinished, was the time now right and offer another perspective, one with the balance only the passing of time can bring? On my visit to Malta almost everywhere I turned they were links with Christina. I often felt unnerved, disconcerted. Did she want their story to be told?”

When Gimli, the fierce dwarf in The Lord of the Rings, wields his battle axe, you pay attention.

When Gimli aka John Rhys-Davies tells you to read a book, you should probably also pay attention.

This is that book. As an actor, Rhys-Davies has an eye for plot and an ear for words, and he is right, this is a story worth knowing. Why it ever came to matter to him is a story in itself. If you think of the book’s first chapter, fittingly titled “Connections,” as one big circle drawn on the page, at its end it will have turned into a Venn diagram of quite enormous complexity. Kudos to author Paul McDonald, who definitely is in one of those overlapping circles, to have had the presence of mind to say at some point during his RAF recce missions, “Wait a minute . . . who? when? why?”

Yes, of course, a book about Malta in World War II involves Spitfires and the Royal Air Force and all sorts of events and people a student of that era will recognize and be interested in. “The most valuable pilot in the RAF” features prominently here, but in a context that is surely not all that widely known. A quick caveat: this is not the first book to deal with the subject, not even McDonald’s first.

We meet the main protagonist first—as a corpse, dead for months, lying undiscovered in a bed. You’re probably not going to put the book down after that, until you’re done, at which time you will have gone through a box of Kleenex. That Gimli was right, this is a story worth knowing.

Even today, the Malta Heritage Trust refers to the Lascaris War Rooms as “Malta’s best-kept WW2 secret.” Located deep in the rock under St. Peter and St. Paul Bastion that dates back to 1599, the complex of tunnels and chambers was the RAF’s Operational Headquarters. Here, the data from the four radar stations and other lookouts in Malta was crunched in the Filter Room—enter, the ladies of Lascaris—and then briefed to the Fighter Control Room and the Gun Operations Room. So important was Malta to wartime reconnaissance that its little air base RAF Luqa was the most heavily bombed airfield in the war.

Rhys-Davis, in his Foreword, references the 2017 musical stage play “Star of Strait Street” by Philip Glassborow that celebrates the life of Mary Christina Ratcliffe, the English singer and dancer (second from the left on the book cover) who became an aircraft plotter in Malta. This play, presumably, occasioned McDonald to revisit the topic he had already examined in his 2015 Malta’s Greater Siege & Adrian Warburton, The most Valuable Pilot in the RAF. The Christina theme in that book takes center stage here.

Ratcliffe herself had written a book, in 1958, One Woman Goes to War. Several books by others and quite a number of newspaper/magazine articles as far back as 1943 have dealt with her, and with Wing Commander Warburton, and the heroic resistance of the Maltese (Rhys-Davis: “Without the heroism of the people of Malta, Britain might have been defeated. Read their story, and never forget the debt we owe.”) McDonald uses these sources extensively but his book is not merely a compilation. If it’s just the facts you want, you may well have seen them already elsewhere and there is nothing fundamentally new here, but McDonald is a good writer who is invested in his subject, cognizant of the Big Picture, able to sound out the emotional disposition of the dramatis personae and thus certainly capable of making even the expert reader consider this book one they won’t want to sit out.

Appended are lists of “Civilian Lady Aircraft Plotters” as well as Cipherines and Clerks, two 2018 news items, a thorough Bibliography, and a rather impressive Index.

What rock must movie script readers live under not to have discovered this topic already?