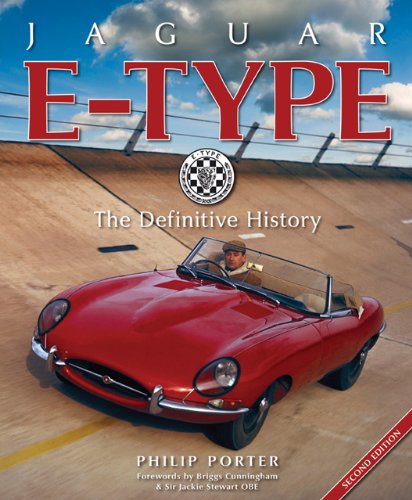 “I have not shied away from being critical or quoting those who are critical, or even controversial, because I wanted to produce a balanced story rather than a one-sided eulogy. The E-type was sensational but not perfect and it would be naïve to pretend otherwise.”

Who needs Viagra when you can have an E-Type? US journalist Henry Manney famously described it as “the greatest crumpet-catcher known to man” and Enzo Ferrari called it “the most beautiful car ever made.” More than 70,000 were sold and even New York City’s Museum of Modern Art has one in its permanent collection of only six iconic cars. Lists are polarizing but any list of automotive greats that includes the E-Type is not likely to have its judgment called into question.

Looks, speed, power, engineering and heritage made it the supercar of its day (1961–1974), and all at a price that undercut any competitor. While the car looks sexy still today, it is clearly a product of its time—namely a time when labor was cheap. Need to overhaul the clutch? Just try doing it without removing the engine first!

Still, it’s a seminal car and there aren’t enough superlatives in the dictionary to do the E-Type justice. The same is true of this book. It is the definitive book, it is a must-have, and it’s been that since its first publication in 1989 (ISBN 9780854295807) when it won the Montagu Trophy for best book of the year (and the Thomas McKean Memorial Cup Award in 1990).

In the Introduction to the first edition, only his third book at the time, Porter wrote, “I cannot, in truth, say that I ever wish to repeat the experience, as it was intense and stressful at times.” Considering that this new edition 22 years later is a total overhaul, we should count ourselves lucky that Porter didn’t let the difficulty of the job get the better of him. Of course, the 25 other books he’s written since then have made him a seasoned pro.

Porter is to the Jaguar literature what Ludvigsen is to Porsche’s. He’s a longtime enthusiast and has written about this model and this marque for over 30 years. He also counts among his E-Types one of the historically significant cars: the oldest E-Type in existence (registered 9600 HP) as well as the red roadster (848 CRY) you see in the original The Italian Job movie and runs the E-Type Club. Not least, he presides over Porter Press International which is notable for its Scrapbooks, four with Stirling Moss and one with Murray Walker.

Published on the occasion of the car’s 50th anniversary the new book is bigger and better in every way, not least in the use of color. That it is a few pages shorter (688 vs 712) is because it is in a larger format which certainly helps the many new photos, a good number of which have not previously been published. The first edition did look, by comparison, drab and it did contain a noticeable quantity of typos but Porter himself now considering it “an embarrassment” seems rather harsh. It is a bit disappointing that even with the advances in print production and image manipulation there are a handful of illustrations (even some by Jaguar Cars) that still are unacceptably murky and fuzzy.

Obviously, more archival material and some entirely new information have come to light over the years and are reflected here. Briggs Cunningham’s Foreword to the 1st edition is reproduced, now joined by one from Jackie Stewart. Both men knew the E-Type from racing but also selling them, enabling commentary pertinent to the sporting and the retail side, both of which are especially relevant to the E-Type’s success.

From tire pressures to model cars, Porter leaves no stone unturned in plumbing the depths of the three series of E-Types. That said, owners of Series 2—let alone Series 3—cars won’t feel quite the love showered on the Series 1. Lots of quotes gathered from interviews add layers of detail. The first third of the book examines pre-history and design and development. D-Types and XKs 120–150 spill into that part of the story. The many design drawings and models give a good account of the evolution of the shape that would become so recognizable you can identify a E-Type at the merest glance out of the corner of your eye.

The launch of the car and the reaction of press and public are the stuff of legend and Porter reproduces lots of ads, brochures, memos, and press clippings. 1961–1964 racing activities are covered in four individual chapters interspersed with chapters on specs, production changes, the US market, and each of the three series and their variants. The chapter on specials illustrates nothing as much as that the original design could not really be improved upon; other chapters cover toy models and the collector car/club scene. If all this heavy-duty contents is too much on an empty stomach, start with Ch. 21 “Reflections” which offers a vast array of snippets of commentary that offer a really good introduction to the place on the food chain this car occupies.

If you truly can have only one book about the E-Type (perish the thought), make it this one. And if you think it’s expensive, just take a look at another book by Porter that came out the same year, Ultimate E-Type – The Competiton Cars. How does £2200 for the Collectors’ Edition strike you? But, hey, those 25 copies included a numbered piece of original metal from one of the 11 remaining Lightweights E-Types (and £1000 went to the Henry Surtees Foundation). Don’t fret, it also came in Standard and Deluxe versions (£95 and £450 respectively).