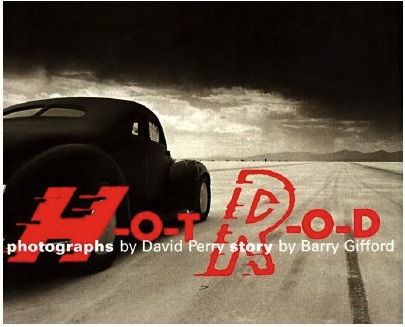 This book is not for everyone. If, when browsing the magazine rack, you would automatically pass by Old Skool Rodz and Hot Rod Deluxe in favor ofClassic Motorsports, Collectable Automobile or Road & Track—or even Rod & Custom (there is a fine line there, but it exits)—you would no doubt pass on this book also. There is a certain shame in that—as David Perry, although versed in some magic blend of hot rod nostalgia and rockabilly and neo-beatnik sensibilities, manages to transcend all these and create a moody aura of automotive admiration.

With its interspersion of double (landscape) pages of pinstripe illustration, classic drag strip advertisements, period cartoons and the like, this book’s reach towards an artistic statement becomes obvious if unsuccessful—but it is the photographs themselves that come closer to the mark. Scenes of hard-looking greasers and dollies (Perry’s labels) do evoke an almost Doisneauian feel, and his long-lensed shots of cars racing across the salt flats of Bonneville offer an alien sense of speed and mystery. Perry’s large overhead skies suggest a kind of magnificence. The drag strip photographs are less good, but a few of the automobile portraits, the Bonneville-prepared Studebaker and the accelerating 1940 Ford, for example, are quite strong. Close-ups of salt-encrusted louvers and headers work well enough, and the shop interior shots of welders portray both the grit and the majesty of such an enterprise.

Barry Gifford’s short story of a greaser, his girlfriend Yolanda, his Cutlass and the old woman, a seer with strangely dilated eyes, seems an afterthought—the book would be better without it. Gifford, among his other credits, had written the screenplay to David Lynch’s Lost Highway, and he has tried to recreate that movie’s mix of spaciousness and surrealism, but here his canvas is much too small and the story all but dwindles away. These few pages, however, can be easily ignored, as it is really Perry’s photographs that make this book. And there are really enough good ones in the lot to make it worth your while.