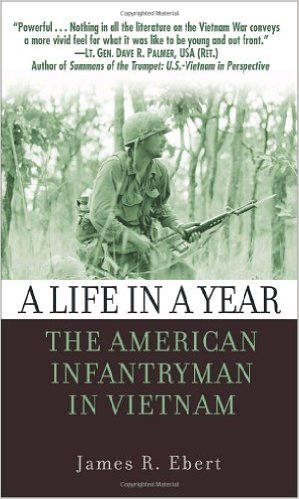 Consider this a review of a review, and then some.

In a letter to the editor by an Army captain published in the June 1994 issue of Army, the monthly magazine of the Association of the United States Army, a book that had been reviewed in their April issue was refered to in no uncertain terms as, gasp, “dreck.”

This is the book they’re talking about. The letter writer wondered just how two retired generals, lieutenant generals Phillip B. Davidson and Dave R. Palmer, could have endorsed such rubbish. The captain decried the plague of what he called “revisionist histories and biased interpretations” that made it “difficult for many veterans to admit nonideological pride or to express unpoliticized reactions to their experience.”

The book review the captain referred to was entitled “Biased Portrait of U.S. Infantrymen.” It was written by a retired Army colonel, Dandridge M. “Mike” Malone, himself a published author (Small Unit Leadership: A Commonsense Approach, 1983) and a frequent contributor to the magazine. Malone’s review of A Life in a Year was, to put it mildly, less than enthusiastic. Malone took the book to task on a number of points, beginning with what he considers the very small sample of only seventy soldiers. Such a small sample is hardly representative of the experiences of hundreds of thousands of infantrymen who served during the war. The opening chapter focuses on the induction process—and calls it “unfair,” something to which Col. Malone takes grave exception. He also bristled at the suggestion that American soldiers may have brutalized and mutilated the enemy. He also suggests that the author was “trying to make the American infantryman a figure of pity, someone for whom to feel sorry.” One gathers that Malone had steam pouring from his ears when he wrote, “He was not, and he is not!”

Malone asks the obvious: where is the rest of the story, the tales of valor and heroism by the infantrymen? Worse, the kiss of death as it were, Malone chides the author for never having been there himself and that therefore he cannot know “what he [the infantryman] did and how he did it.”

In other words, Mike Malone did not care for the book. At all.

The author, James Ebert, a Wisconsin high school teacher, wrote the book thanks to a late-night conversation as a 16-year-old in 1970 with his future brother-in-law who had, in fact, “been there,” as an infantryman in Viet-Nam. In his Preface, Ebert takes the time to lay out his reasons for writing the book—how, who he interviewed, and what he intended it to accomplish.

Why, you may now wonder, devote so much energy to talking about someone who 20 years ago said a book is bad?

Well . . . I too had been in Viet-Nam—as an enlisted infantryman, which is exactly what this book is about. When I first read the book it was not long after it had come out. And I was still in the Army, a lieutenant colonel at the time. The book caught my eye and I bought it on a whim. I point this out because by that time there had been a large number of oral histories published relating to soldiers’ experiences during war, most, at least in my view, mediocre and an utter waste of perfectly good trees.

To my complete surprise, at the time I thought that Ebert’s book was actually quite good. Thanks to the Preface, I understood its several weaknesses which freed me to appreciate its strengths. After a recent rereading, my opinion of the book has not changed much. If I were to make a reading list of books related to the Viet-Nam War, I would put this book on it! It is certainly not a crucial primary source but I recommend it.

Malone’s review in Army, on the other hand, struck me as myopic, contemptuous, and all too typical of the school of thought that holds the war was a lost cause due to what one might call Other Factors (another way of saying the military didn’t lose the war, politicians did by holding held back the military and then stabbing it in the back and denying it victory). Even folks who taught at the Army War College—think Harry Summers—flogged that point of view. I had meant to write a rebuttal to the Malone review but more important matters required my attention. Still, I never did forget my irritation at what I considered to be a really biased review. Malone died not long after the review, which made it a bit pointless to hold a grudge. He had not actually served in Viet-Nam but Korea, had been commissioned through the Officer Candidate School (OCS) in 1955, and as a lieutenant colonel in 1971 was involved in a study of leadership that was prompted, not least, by the My Lai massacre and other leadership problems in the Army overall and its officer corps. When he retired in 1981, Malone was a member of the staff of the Army War College.

Given that his own book, Small Unit Leadership, published just after his retirement, was considered mandatory reading by just about every commander in the Army, I often wondered just how Malone could have been so utterly tone deaf and even clueless regarding A Life in a Year. Like Malone, I had risen from private—a draftee no less—to the rank of colonel. Both of us were OCS graduates. However, he was an officer during his time in Viet-Nam and I was, first, an enlisted soldier and then a noncommissioned officer (NCO) during my tour. Whereas Malone may have spent perhaps a few years as an enlisted soldier before being commissioned through OCS, I spent a number of years as an NCO before being commissioned at the ripe old age of thirty—being a sergeant with a graduate degree.

Malone seemed to have a romantic, sentimental, even nostalgic view of the soldier and the Army. After being asked during an address to officers in the basic and advanced infantry courses at Fort Benning, Georgia by a second lieutenant just what a soldier was, Malone found himself waffling in search for an answer on the spot but later offered a written response, entitled “Soldier.” It was recorded and then circulated and found its way into no end of classes and briefings. My response to “Soldier” was to be polite and listen. It is no exaggeration to say that I saw grown men get misty-eyed and tearing up during the Malone talk. After hearing it a dozen times, I tuned it out as best I could.

Therefore, it was a surprise that Malone so roundly criticized a book written by a Wisconsin teacher, who, with the best of intentions, often seemed better able to capture what an infantryman might have experienced in Viet-Nam. Better than some officer who more than likely spent much of his 12-month tour in a rear-echelon job, the normal routine for officers during the war, even infantry officers. Harsh on Malone and, perhaps, many others? Maybe.

Then again, if we are to use one of Malone’s criteria for judging the book, being there, as an enlisted infantryman, a Lurp and Ranger, during the war, perhaps I am better suited to judge the merits of the book. In that case, I suggest that it is worth the time to take a few days and read it!