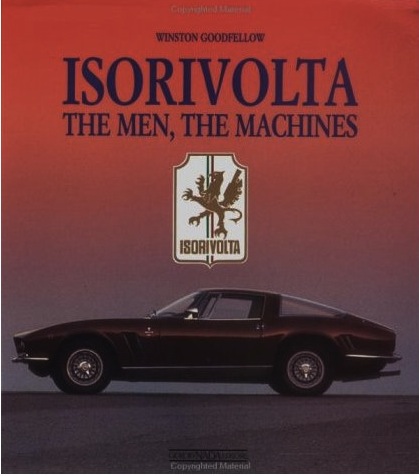 Curious minds want to know: why was a firm that produced competent and desirable cars not strong enough to survive? and if they were competent and desirable why did the cars fade from memory within a few short years? and, in the larger scheme of things, why did the entire Italian GT sector collapse after years of domination? The author was one such curious mind. He owned and liked those very cars, most particularly his Iso. Unable to find sufficient answers, he set about to research the matter himself.

By that time he had long been smitten with Italian cars, having owned several and known others who did too, and having seen the founding of the Iso and Bizzarini clubs. Add to that an interest in photography and a sense of urgency about preserving automotive history and you have the sort of person who is not just an informed collector but someone who advances the hobby. Finding himself sidelined during the collector car crash in the 1990s he used the free time to write the first of now three editions of this book. That first edition in 1995 made his name and emboldened him to become a full-time writer/photographer.

Having met, in the early 1980s, ex-Iso chief Piero Rivolta-Barberi (he wrote the Foreword) who introduced him to former Iso employees and other movers and shakers in the upper echelons of the Italian car industry enables Goodfellow to add facets and nuances to his investigation of Iso that take his book far beyond a clinically detached survey. However accurate that may have turned out, the first-hand accounts and insider information he is able to draw on elevate his book to one of those essential must-read tomes. Moreover, as Goodfellow’s research progressed he realized to what extent Iso’s fortunes reflected the larger issues of Italian societal and also political trends and so we have here not merely the history of a car company, interesting as that would have been all by itself, but a big-picture, context-rich spotlight on an era as a whole. In other words, anyone with any interest in any make of Italian supercar will make here useful discoveries. Goodfellow is also fully cognizant of what role people of flesh and bone, egos and passions play in the making of a product of high aspirational value. He writes, “Of them . . . I am a bit envious. If only we all were so enthusiastic about our work, and had the ability to bring such joy and intense feelings to other people’s lives, let alone our own.” Well, the fruits of Goodfellow’s labors—this book—will inspire similar thoughts in his fellow man!

A brief bio of Renzo Rivolta (1908–1966) and his acquisition of the Isothermos company (refrigerators) in 1939 are followed by a description of the early scooters and mopeds and an in-depth treatment of the seminal Isetta microcar and its various derivatives. Technical matters are worked into a narrative whose primary focus is on people, ideas, and circumstances. By the late 1950s Rivolta perceived the country’s readiness not just for a larger, more luxurious car but for a second car. Freed from the requirement to answer a basic need, this second car could be a folly—such as a fast, sleek, long-legged gran turismo sportscar with which to crisscross the country if not the Continent. Wherever applicable the author describes other makes of cars and their influences on Rivolta, and one chapter each is devoted to two of the most critical factors for the future Rivolta cars: the John Gordon/Jim Keeble cars and the engineer Giotto Bizzarini.

As the story hones in on the Iso Rivolata cars the photos become larger, color, and include specific close-ups. The design and development of and the philosophy behind the cars is described and richly illustrated with photos and ancillary material such as ads, drawings, spec sheets etc. The Rivolta GT, Grifo, Fidia, Lele, prices, export markets, racing, coachwork, the ill-fated foray into F1, even the aborted 1991 Grifo 90 and an even later nameless successor—everything you should know is here. Throughout, the writing is brisk, engaging, and concise. There is no fluff here; every word counts. The typesetting, however, is rather simplistic and neither easy on nor pleasing to the eye.

Not that one would wish to encourage shortcuts, but the author intentionally put so much detail into the photo captions that a reader who only read these would get a basic grasp of the subject. Most of the photos are period ones, a few quite fuzzy. The non-period photos (all but one are the author’s) are called out as such “for the benefit of restorers and historians.”

The penultimate chapter by Chris Angermann details Piero Rivolta’s activities in the US following the messy 1974 bankruptcy and his subsequent emigration: real estate and luxury boats, but alludes to his literary ambitions in only one sentence in a photo caption. This is odd since Angermann is the editor in chief at New Chapter Publisher, the publishing house owned by Rivolta, an accomplished poet and novelist.

It is a pity that a book that has been in such demand to see three reprints is still not available as a hardcover.