F1: The Pinnacle, The Pivotal Events That Made F1 the Greatest Motorsport Series 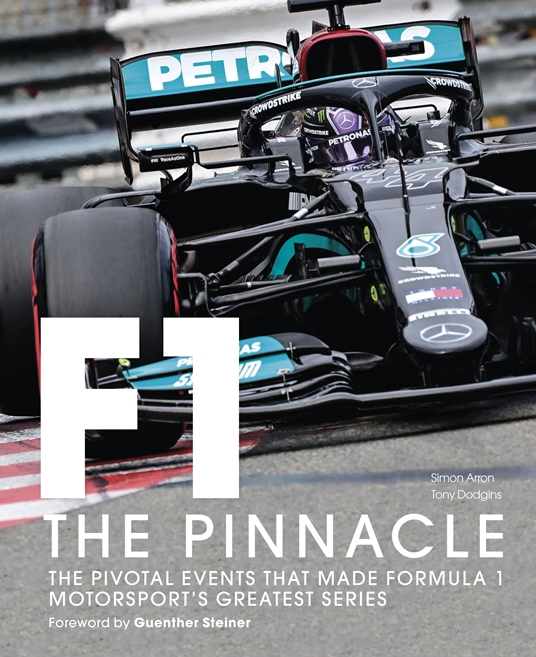 “Any suggestion that F1 grids should be mixed up or run in reverse order has the racing purists howling with rage. Yet when the fastest car starts at the back it can produce spectacular action, such as Lewis Hamilton’s drive in the 2021 Interlagos race, when he started at the back and hauled himself up to fifth, a drive so audacious that it made Fernando Alonso laugh when he asked where Lewis had finished. So it’s interesting to learn that in the 1930s grand prix race grids were decided by ballot.”

The title/subtitle are obvious enough, so let’s jump right in. This is a neat book for those who don’t “get” Formula 1, or those who do but only take a casual interest and may not have instant recall of what happened when or who is who etc. The book jacket also says it’s “a must-read for completists,” which is pretty much a truism regardless of a book’s merits. Besides, at a mere $50 the book is too cheap not to own. (The low price is a function of powerhouse publisher Quarto [formerly Motorbooks] being behind it and not at all an indication of low production values or the like.)

But, the elephant in the room is: what will readers with a catholic sense of the sport’s full history since 1950 think? While those readers would be the first to spot that the book’s coverage is not evenly divided across the eras—which would be apparent to anyone if the story were presented in chronological and not thematic order—those same readers would/should concede that such a book would have to be either vastly larger or, if kept to the same ca. 250 pages that this one is, so superficial as to be pointless. Moreover, the early eras were in every respect—money, technology, participation, regulations, audience etc. etc.—so different from the modern era that there is no clear “linearity” between the dots this book seeks to connect. 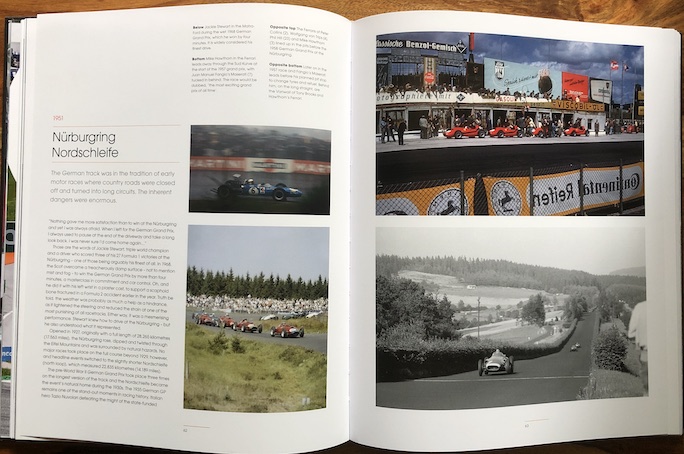 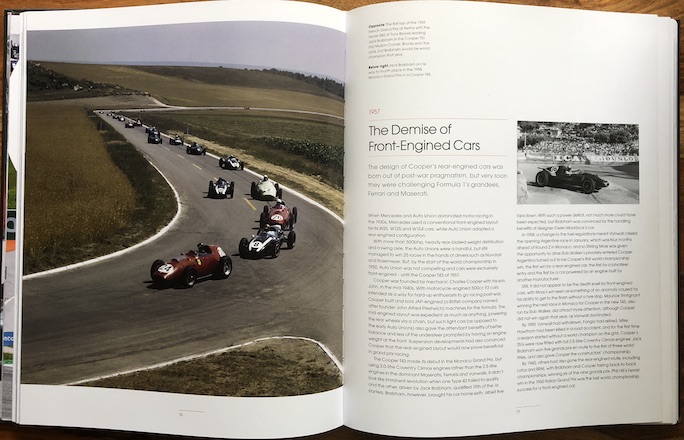 Long story short: the book deserves notice. That both authors are steeped to the gills in motorsports matters of all stripes is really the key to navigating the friction between “too much” and “too little,” meaning, you may have written, or wished for, a different book but the book as is makes sense and has a place. And the timing is just right inasmuch as the year of publication, 2022, saw the most comprehensive rule changes in decades and in many aspects will come to be seen as a demarcation point between eras. 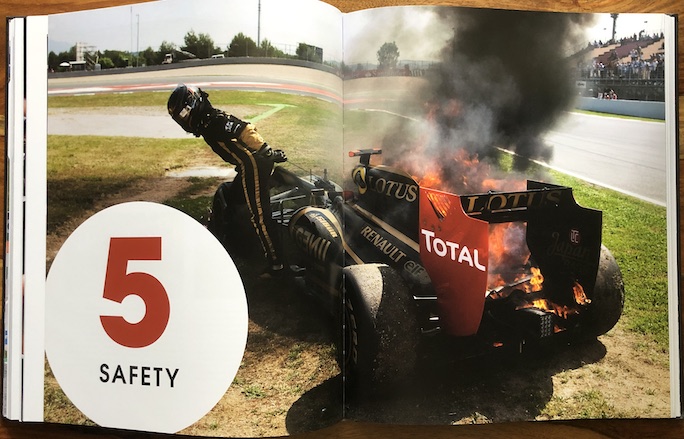 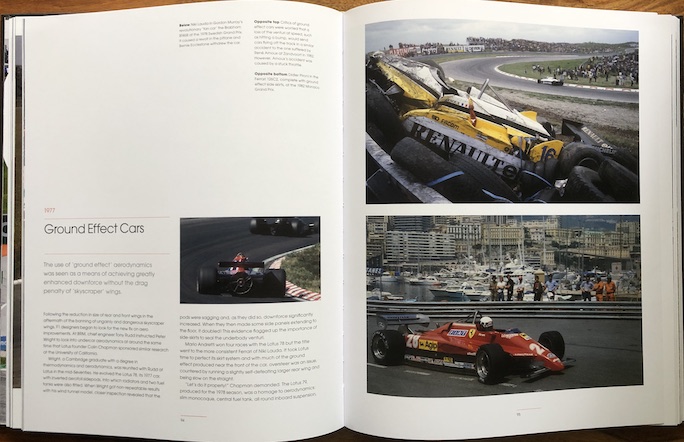 The book begins, obviously enough, with the dawn of modern F1 racing, in 1950, all sketched out on one single page and then moves forward to 1957 and then 1958, again with one page each, before skipping forward to 1968 and then 1973. This illustrates the MO: the authors are looking backward from today and shine a light on those events/years in which something formative transpired that would steer the sport into the form it is now. For instance, the starting grid was not always in the configuration it is today (1973); there was a period when there was no refueling and then it was reinstated. Timekeeping, racing points, tire use, circuit design and any number of consequential happenings can be pinned to a specific point in time—and that is what this book is about. More importantly it explains why. If you already know all these things, good for you, but do this quick test: what does Ecclestone have to do with the Kremlin? More accurately, “The Kremlin”? This is just a throwaway reference in a photo caption here but it manifests that the book doesn’t just wend its way from headline event to headline event as if nothing noteworthy happened in between but that the authors find ways to impart tidbits that in and of themselves may seem peripheral but really are emblematic of bigger stories. 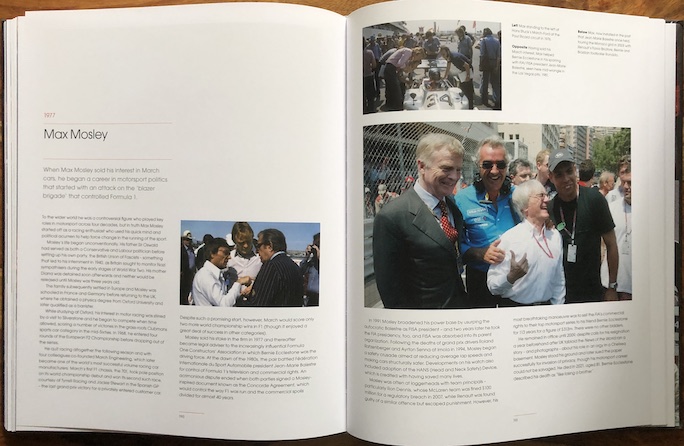 The Table of Contents is structured in admirable specificity and clarity; there is no ambiguity as to what will be where. And there’s an Index! And many really good photos! And an entire chapter of topics lesser authors would give a wide berth: the 1982 driver strike, team orders, the 2005 tire snafu at Indy, and the Big One, “FOCA vs. FISA: The Battle for F1.”

How Haas F1 Team Principal Günther Steiner got the Foreword-writing gig is a bit of a puzzler. On the one hand he’s been around motorsports for over 35 years, starting his career as a rally mechanic in 1986 and then switching to the management side before moving into F1 in 2001 with Jaguar Racing. He even started his own manufacturing company so he knows that side of the business—and all these strands should, one would think, combine to make one impactful Foreword, but instead it’s mostly about Haas. No matter, this book is firing on all cylinders. (And cylinders, come to think of it, were last regulated in . . . ? This book will tell you.) 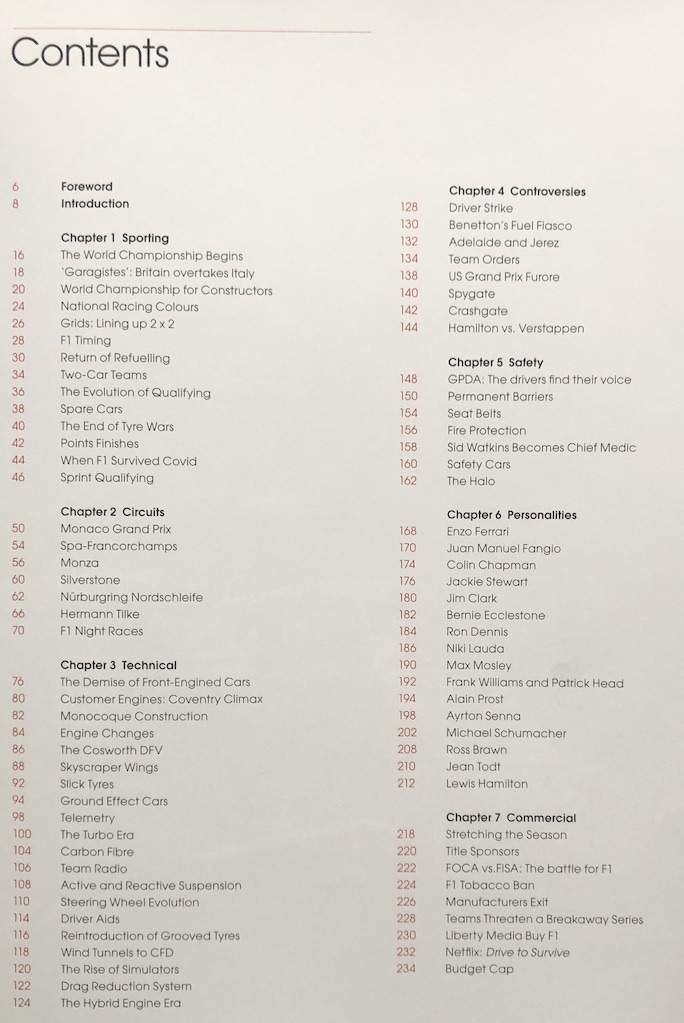 The Pivotal Events That Made F1 the Greatest Motorsport Series