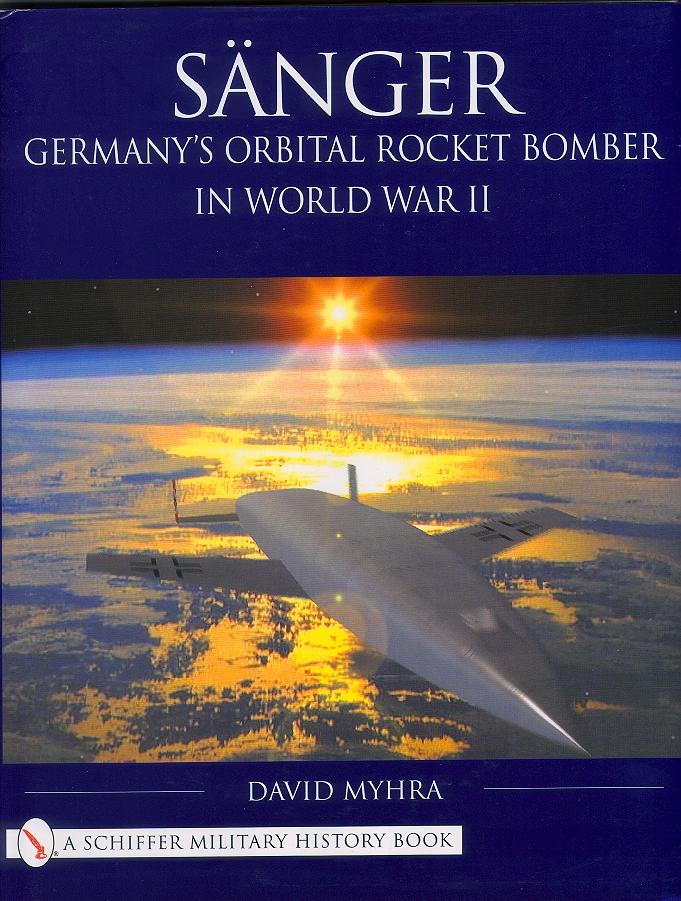 Everyone knows NASA’s soon to be retired Space Shuttle. Many know the X-15 and X-20. But few outside the aviation/rocketry community know the craft or the man that provided key theoretical underpinnings for their propulsion systems and the principle of the lifting body: Austro-Hungarian aerospace engineer Eugen Sänger (1905–64) and his manned, bi-fueled, liquid rocket-powered sub-orbital—and reusable!—craft, a world’s first. Mind you, it wasn’t built, couldn’t be built, thankfully. All that remains of it are some models, designs, and an engine. Had it been built it would have changed the world.

Since we assume this to be a not widely known subject we will devote a few more words to it than we normally do in a book review.

Almost all modern rocket engines use Sänger’s concept of “Regenerative cooling/regenerative engine” in which fuel or oxidizer circulates in tubes around the engine bell in order to both cool the bell and pressurize the fluid. Putting moral and philosophical issues aside (this is a weapon after all) and looked at it in strictly engineering and technological terms, Sänger’s proposal presents an absolutely fascinating, revolutionary chapter in the history of aviation.

It is estimated that German scientists proposed more than 400 turbojet-powered and bi-fuel liquid rocket-driven aircraft. Author Myhra has devoted much energy to writing a stack of books recording their stories, all for this publisher. First conceived around 1931/32 as a civilian spacecraft, when Sänger pitched the idea in the 1940s to a German Air Force anxious to subdue the world he called it the Amerika Bomber because it could fly from Germany to the US in an hour, deploy somewhere above Indianapolis a 5,000 pound bomb that would glide towards New York City—or D.C., Chicago, or Pittsburgh—where it would explode at about 3000 ft and scatter radioactive silica dust that would disperse over miles and miles. Nasty. And not science fiction!

Launched via a rocket-powered sled from an almost 2-mile long monorail track and powered by a cocktail of gasoline, oil, and liquid oxygen, the bomber would attain a forward speed of over 13,000 mph and climb to the fringe of space from where it would then gradually sink back into the stratosphere whose increasing air density would produce lift against the flat underside of the aircraft, thus causing it to “bounce” and gain altitude again. By repeating this process it would skip along the upper atmosphere without actually entering orbit—hence, sub-orbital.

If by now you’re not already twitching in your chair you have no imagination! It is not easy to write a sound book about something that never existed. Myhra didn’t resort to “imagination” but reasoned science to extrapolate from that which is not known that which is possible within the parameters of the known universe. After first establishing that Sänger’s abilities were considered so important that the Russians, after the war, offered anyone their weight in gold who could have told them his whereabouts (no one did), the book begins with a fast-paced synopsis of the bomber’s vital stats and mission profile before going into deep detail about every feature and technique of proposed construction and flight behavior. All this is interwoven with hard fact about Sänger and his mathematician wife Irene Bredt, descriptions of trials of those components that did exist, overall German aviation activities, and the war effort in general. Sänger’s significant postwar professional work (especially ramjet research) and affiliations are also discussed (but, strangely, the book does not mention that he was cofounder in 1951 and first president of the International Astronautical Federation which to this day remains the only international federation for the space community that addresses all aspects of space—developments, activities, knowledge, experts and the future). The majority of the illustrations in this part of the book are actual period photos, drawings, and documents that are occasionally augmented with b/w artist’s renderings of things that didn’t exist or hadn’t yet happened.

Now it gets creative. Preceding the Appendices is a section called “The Rocket Bomber in Flight” which is a frame by frame pictorial simulation in docudrama fashion in the form of digital images rendered by Josha Hildwine and Marino Merino (not only two distinctly different artistic styles but also two different ways of interpreting and resolving technical detail). Obviously there cannot be any photos of this since the event never happened! The chronology of this “cartoon” seems off in that it opens with a sequence of views of Earth seen from the bomber, then shows in the middle “cutaways” of its construction and launch from the rocket sled, and then resumes flight culminating in bomb release and return to base.

Appendix A presents a likewise “virtual” but very detailed mission profile, and Appendix B a timeline of the development of the Lifting Reentry Concept beginning with Sänger. The Index is sufficient but does not list every occurrence of every entry. Similarly odd is that the Table of Contents enumerates every single chapter and section—but gives no page numbers! We have often remarked that Schiffer books sport such idiosyncrasies (also, every proper name is printed here in italics. Who does that?!) and one never knows if they’re on purpose or by accident, or whether to laugh or to cry. But, as other Schiffer books, this one too has beautiful marbled endpapers, good paper, a proper rounded spine, and imprinted cover boards.