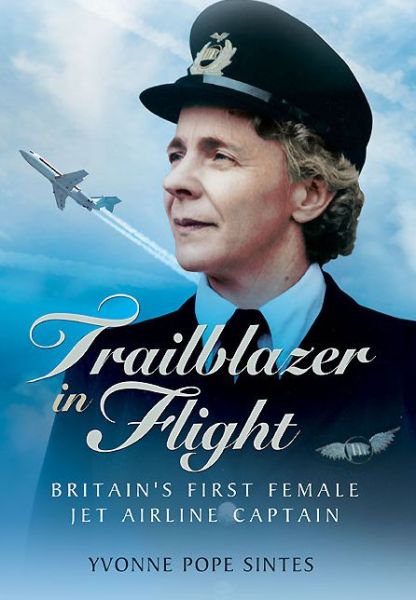 From Air Hostess to Senior Jet Captain is about as full a career arc as one could have, but it is all the more remarkable for a woman—and even more so for a woman in the 1950s and in a field that was (is?) extremely male-oriented. Yvonne Pope wasn’t the only one to blaze that trail but she was the first woman to be certified as Captain on commercial jets (on the Comet no less, in 1975).

One should think that the still-fresh memory of the exemplary and mission-critical manner in which female pilots had contributed to the WW II effort as Air Transport Auxiliary Pilots would have once and for all laid to rest any doubts about their abilities with stick and rudder but prejudice dies hard even among peers who ought to know better. When, for instance, after much toil and tribulation Pope received her first job offer as a full-fledged airline pilot, it was rescinded—temporarily—when a male pilot threatened to quit is she was hired. To further complicate matters, the flying/paying public had a difficult time calibrating its gender expectations and civil airlines could ill afford to ignore public sentiment.

So, an uphill battle then, and this book is full of them, personal and professional, both mostly in the early stage of her career. Incidentally, Pope was also the first female Air Traffic Controller (school for which she recalls as “the least enjoyable period of my life”). That she persevered is due to a fascination with flight early in childhood that instead of abating became an obsession. Nicknamed “head-in-air” Yvonne—with a dog named RAF to boot—an airline job, ideally in the left seat of the cockpit, was what she wanted and what she pursued.

On that score alone, i.e. to follow her steps from small to large aircraft and to see the inner workings of the airline industry, her memoirs are worth reading. But there is also much of social import such as WW II, back and forth between England and her native South Africa, her parent’s divorce, education, values, mores. The writing is a bit unpolished in terms of clarity of prose, story arc, and a sometimes indiscriminate level of magnification (random example: while “Dr. Grey’s Diet” was indeed crucial to Pope dropping the pounds to be accepted to stewardess training, reproducing the actual food types and quantities is probably of limited application to today’s reader in view of current nutritional guidelines) but she is sincere and, most importantly, a front-row eyewitness to the things she writes about. In fact, if any book about the life and times of the female commercial pilot was needed, hers is the one because of her singular place in that story.