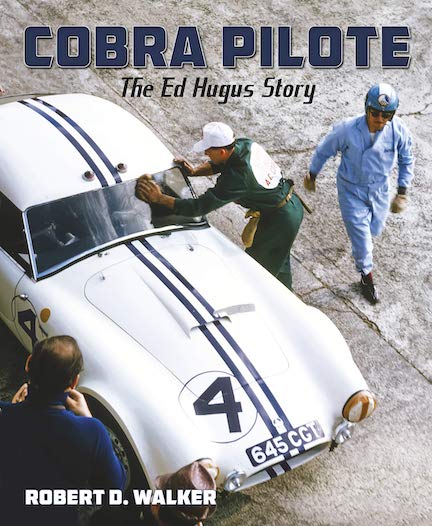 “After Shelby had convinced Ford and A.C. Cars to back him in the construction of the Cobra roadster and ordered the car, he did not have the money to pay for it! The first load of cars, which came to the U.S. via the East Coast went to Hugus’ dealership, European Cars. He paid for them, saving Shelby’s dream. Hugus also prepared and sold the first production car, CSX 2001, from his shop in Pittsburgh. Technically, Hugus was the first Cobra dealer, but as the program gained momentum and Ford entered the picture, Ed was eased out.”

And that, dear reader, is one of several reasons why a man none other than Shelby insider Peter Brock called “the great but unsung American sportsman” and “the Texan’s first real ally” is so little known in Cobra circles. A much bigger reason is that Carroll Shelby, never one to graciously share the limelight, controlled the narrative for decades—and Hugus, who died in 2006, was too much the gentleman to seek it. In fact he quite actively shunned it and, considering his personality and work ethos, would have found it exceedingly difficult to sanitize his complicated Shelby experience into a “just the facts, ma’am” account that could have steered clear of saying anything unseemly about the “Pied Piper.” A different picture of Shelby emerges in these pages and an astute reader will not fail to deduce that even it skirts certain issues. As much as this book does correct, or enhance the record, it falls short—by virtue of Hugus’ politeness and the author’s ultimately uncritical or unprobing acceptance of it—of calling a spade a spade. 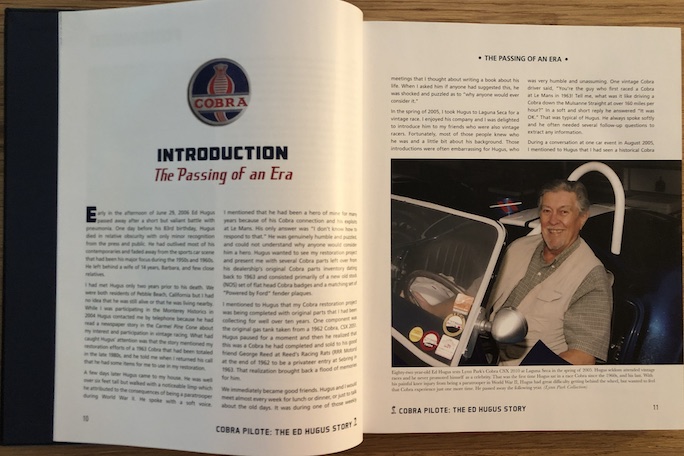 Location/location/location is not just a real estate mantra, it’s what brought author and subject together. Both happened to live at one time in Pebble Beach, Walker was racing a Cobra and restoring it, and Hugus saw his name in the papers and contacted him to offer parts. The resulting friendship had only two years to run before Hugus died (2006) but Walker, who had not known of him before, realized right away that his was a story that needed preserving and started interviewing him; later, the Hugus estate made his personal papers available.

Titling the book Cobra Pilote gives a rather disproportionate weighting to Hugus’ Cobra driving. A car dealer with a high-end sports car portfolio he was a racer, at the amateur level, who campaigned for years any number of marques and was one of the few Americans back in the day to run the 24 Hours of Le Mans, for 10 years!, and it is there that he and Shelby crossed paths.

To the reader new to the Cobra saga this book is a highly recommended point of entry because it tees up a chain of events relating to the early Shelby years that will increasingly be corroborated as accurate, meaning you won’t have to unlearn it any time soon—which will be the challenge for all the old Shelby hands who can cite chapter and verse of the older literature. 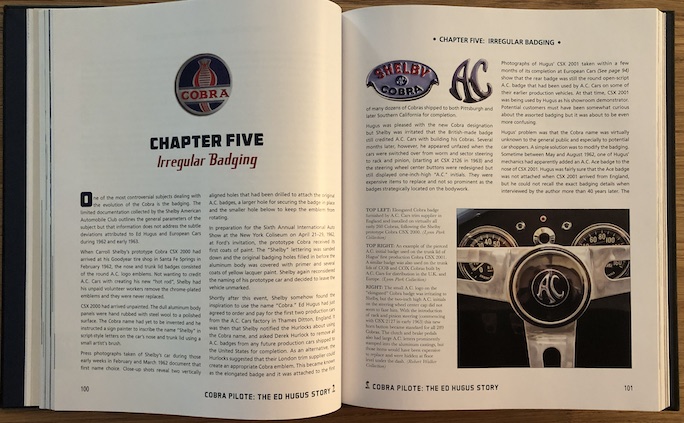 As a principal player Hugus’ account must carry weight. It paints a picture of the AC/Shelby/Ford dynamic and timeline that deviates markedly from Carroll’s self-aggrandizing take. It may be inseparable from becoming a successful entrepreneur, especially of the larger than life American flavor, to also be a schemer of the “fake it ‘til you make it” kind. But more than that, the Shelby shown here was shady to the point of being duplicitous—wherein lies the one problem in this book: no matter how many times you read it, Hugus’ motives for going into business with Shelby are never quite fully explained. 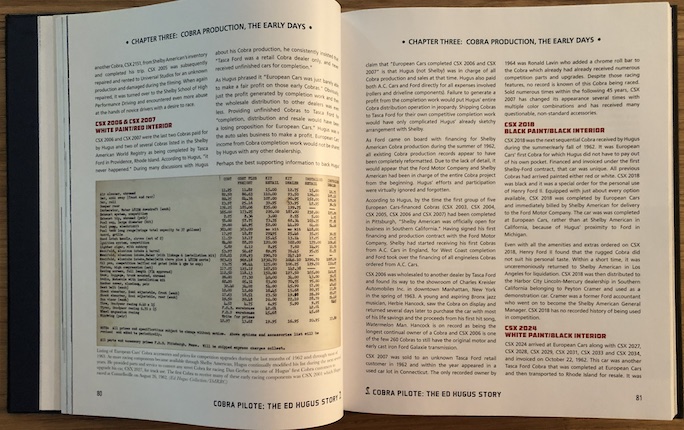 Hugus was at best ambivalent about Shelby the businessman, and says as much, and there is a fairly overt undertone of frustration over disagreements, commitments, and outcomes. It is unreasonable to say Hugus has an ax to grind; he could have done that long ago—he used to say he found it almost unseemly that anyone should have any interest in him—so there is no cause for dismissing his story as “spin”! Obviously the author didn’t want to press Hugus on certain matters but it is naive to think that, as Walker sets forth, Hugus was solely motivated by a desire to “help” Shelby or “liked the cars” (which really were too new and unknown to justify the financial risk—in fact Hugus’ dealerships themselves required backing from other parties). Worse, after being burned once, he got into a business relationship with Shelby a second time! Two excerpts—that don’t even pertain to the same event—underscore this:

We covered the foregoing to establish that the well-read Shelby enthusiast must be prepared for a new paradigm. Anyone inclined to cite data from the Shelby Registry as a counterpoint should consider that it is primarily anecdotal self-reporting by owners/members, and that the “official” data from Shelby-American and Ford is incomplete and often enough not in synch. Hugus puts the onus of that on Ford in their eventual “overlord” role, not just in terms of which entity gathered and filed what data where but in basically not taking much of an interest in it in the first place. Walker enumerates a number of errors in Cobra listings, also and especially about Tasca Ford, so be ready to annotate whatever other sources you consult. In fact, Walker hopes the Registry will use his book to correct errors that have been around since the 1980s. 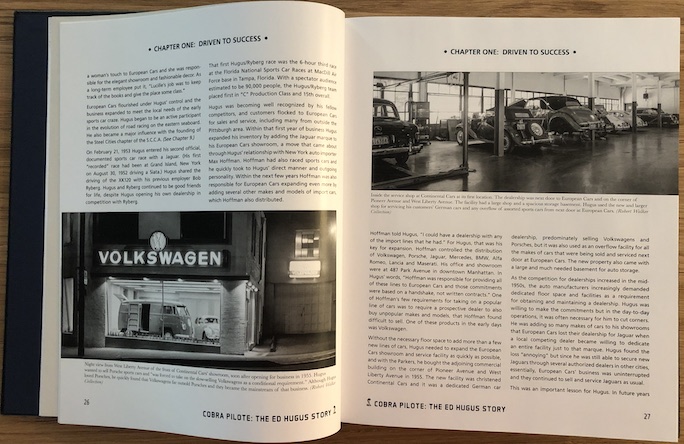 But—the book is about more than that! Not to mince words, it is a bit disorganized or, specifically, repetitive. (There’s a different way to say this: if the author’s assumption is that certain readers will hunt and peck for only those bits that interest them, then it is a virtue to repeat the same information in different places.) 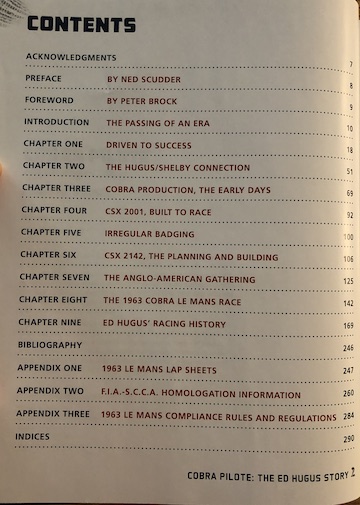 Anyone interested in the logistics and finances of starting the build of a car in one country and importing it into another to be further built up will find much to ponder here.

Also of great interest is Hugus’ experience in retailing and servicing foreign cars at this watershed time in US car history (not least making VW a household name), and his racing exploits in the US and on the international scene. Another lengthy excerpts begs to be shown: 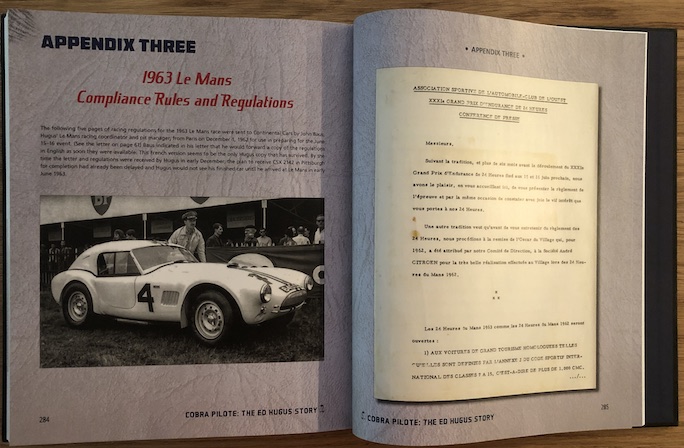 What makes the Shelby story and Hugus’ role in it so especially interesting, and, again, so quintessentially American, is the context of how it ends: the epic “Cobra-Ferrari War” that plays into so many dynamics large and small of the origin story. (On that score, note that the Index is divided by people, places, media, events/teams, companies, and cars. While this is laudably finely parsed it does mean you may have to check several sections to determine if there is any reference to what you need to look up.)

Hugus is of course no longer among us so cannot resolve the inevitable questions his account will engender. Others in the Shelby universe still are so let’s hope someone will go ask them the right questions.

Porsche, Alfa, and Ferrari motorsports enthusiasts too will find the book relevant. Ferrari folk will dissect the backstory to the hybrid Lotus/Dino Ferrari a Hugus mechanic built in the late 1960s. The 1965 Le Mans-winning Ferrari is discussed, with Walker offering a different read on Hugus’ role in it. The last chapter discusses his entire racing career year by year in narrative form so events/results are not conveniently presented as a table.

Even if you don’t read a single word of this book (whaaat??) the photos are a major draw. Many are from the protagonist’s collection, and most have never been published.