The Roycean: From Manchester to Crewe, via Derby, No. 5 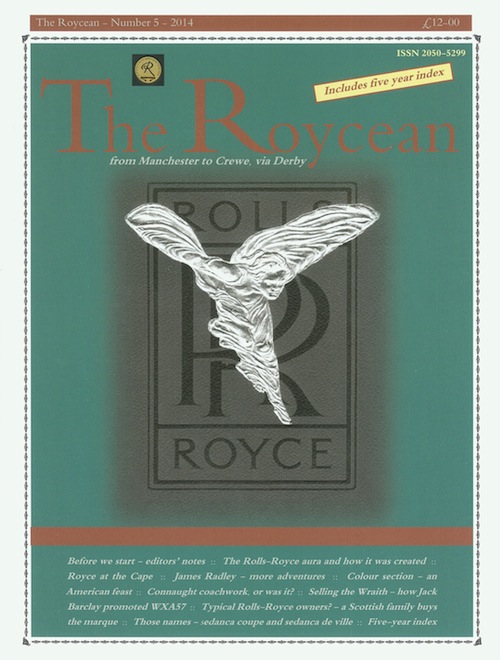 Issue no. 5 of this respected and respectable annual journal about the deeper things of Rolls-Royce history has come to pass—hooray—and with it the promised index for all five issues.

Given that The Roycean is all about micro detail a proper index is absolutely crucial unless you have photographic memory. Even at six pages long it does not contain everything under the sun but concentrates on those items the authors deem to have “long-term value.” Serious users of this serious journal know of course that scribbling annotations in the margin and plastering post-it notes all over are par for the course and will amend their copies to suit their own requirements. The authors, in fact, encourage this and since issue no. 2 the introductory section has included corrections and additions with which to mark up previous issues. Among the gems this time is the discovery that Henry Royce’s father (first discussed in vol. 2) was sent to Holloway jail for fraud! You’ll want to go through these pages with a fine-tooth comb especially since not all those nuggets are captured in the index.

On the one hand, The Roycean has hit its stride in terms of format, scope, and approach: there clearly is a demand for such a level of magnification. Aside from the obvious social and financial aspects of the company and its storied cars, the firm and its personnel were and are key figures in the history of engineering and it is only right that over time every rock be turned over.

On the other hand, that certain fatigue every editor knows and dreads is evident: as fresh feature-length material becomes scarce, Roycean editors Tom Clarke and Will Morrison have to jump into the trench more often and write articles themselves. Of this issue’s seven articles, Clarke’s byline graces three and Morrison’s one. Note to the very readers who cherish publications such as this: pony up, not just the dineros to buy it but turn over those dusty boxes of ancient files and trawl for things never before seen so as to enlighten and delight your fellow man! There are quite a few of such goodies here, in that opening 20-page “Before we Start” section that reports on snippets and tidbits and oddities and mysteries—from a chance find of a Flickr photo of a 1907 Silver Ghost to ca. 1909 shots of Rolls-Royce’s repair shop at Derby to a “feast of heroic coachwork from the Edwardian period.”

The first article proper, by Steve Hubbard, examines the “aura” the early Rolls-Royce company cultivated and which so contributed to how the marque was perceived. The second one, by Derek Stuart-Findlay, fleshes out a bit of history of which not much detail was known heretofore, Henry Royce’s recuperative 1902 trip to South Africa (after years of having worked himself to exhaustion prior to getting into the car racket—in which he would again work himself to exhaustion). We now learn that he had with him the English translation of a French book from 1900 on automobile construction that surely influenced his thinking about what a car, namely his car, could and should be.

Next, Tom Clarke takes another look at James Radley of Alpine Trial fame, relates how a particular Rolls-Royce Wraith with body by James Young was promoted by the dealer James Barclay, and re-examines the lofty claims coachbuilder Connaught made as to its ancient origins (myth!) and offers a visual primer of their output.

A color section in the center of the book reproduces US ads from 1917/19 by Rolls-Royce agent Robert Schuette and coachbuilder Brewster. Will Morrison then ruminates about what sort of people become Rolls-Royce owners by looking at three generations of his own family. Lesson: money and title not required. Well, some money . . .

Lastly, Jack Triplett explains what makes a sedanca coupe different from a sedanca de ville. Nothing is simple. 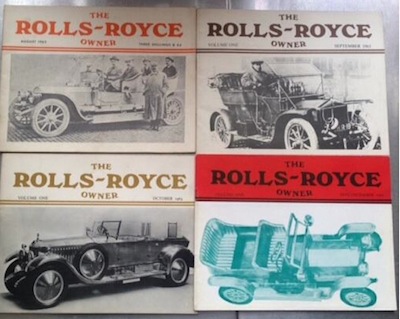 In every issue the editors express the hope that their work emulates that of Jeremy Bacon’s The Rolls-Royce Owner, a magazine of similar flavor of which eight issues appeared in 1963/64. It does; no, it surpasses it because, with the remove of time, it is harder to keep finding new material and to stoke interest in it.

The Roycean: From Manchester to Crewe, via Derby, No. 5

Anton Romako: Admiral Tegetthoff in the Naval Battle of Lissa »
« The A–Z of Three-Wheelers: A Definitive Reference Guide