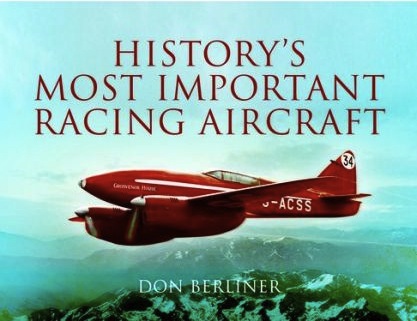 “Over and over, a trophy race series or a racing class began with fairly standard aircraft and soon evolved into highly specialized machines whose general practicality faded as their power increased and their size decreased.”

Whether its aircraft or cars, racing improves the breed thanks to trickle-down technology. But for every one thing that works, there’s a bunch of ideas that didn’t: “The air racing landscape is littered with the bits and pieces of aircraft whose radical shapes and power plants had been seen by their designers as the solution to a host of problems, and the most direct, if eccentric, route to victory.”

The author who retired only in 2012 from a 27-year stint as president of the Society of Air Racing Historians which he founded has covered many races in the US and Europe. The purpose of the society is to preserve complete and accurate records of air races, race pilots, and race planes—and it maintains a very nice website containing all manner of information. Berliner is obviously the right man to write a book about all this, and, in fact, he has done so before. He has also officiated at one of the premier events, the Reno Air Races, and as one of the expert commentators sought out by the press after the catastrophic September 2011 accident that hurt spectators there pronounced the sport to be “in a delicate shape at the moment.” As an ex newspaper man and with some 30 years in the aerospace writing business you’d of course think that he could weave fact and drama together into one gripping book. Well.

While this is a handy, convenient-to-have book in some regard, it seems that no one (not necessarily the author!) has given much thought to what utility either the reader new to the subject or the expert will find in the presentation or methodology the book offers. There is rarely ever only one right way in which to organize a book, and any choice an author makes as to in- and exclusion is doomed to be decried as arbitrary. As there’s never merit in moaning about what a book could or ought to have been, we will look at the book it is—and say: it adds nothing, really, that wasn’t known already, and what it does contain is uneven.

Now, the title reveals right off the bat that the book isn’t so much about the human story as the flying apparatus, and the qualifier “most important” obviously means that there are other, lesser machines. No one could possibly argue with the latter. But, let’s put ourselves into the shoes of the novice reader and look at an event that may be assumed to be widely known, the Schneider Cup (for seaplanes only). Its treatment here follows, in chronological order, the Bennett Trophy and it, in turn, is followed by coverage of the Pulitzer Trophy (for landplanes only). So far so good. While these events do partially overlap, the reader will glean an understanding of the timeline. All sections in the book begin with an overview of an event or general topic which is then followed by individual descriptions of aircraft. In the case of the Schneider Cup, you’d find the usual suspects: Deperdussin, Supermarine, Curtiss, Macchi, Savoia-Marchetti etc. Only in reading each entry does it become clear that in each case only one single running [year] of the race is discussed, with the focus on that one protagonist and mention of other contestants in passing only. This was a long-winded way of illustrating that, as stated above, there is quite a lot contained in this book, but the reader is left to himself to string together a cohesive, organic, inspiring story.

The above is followed by a look at long-distance races (not much of a spectator sport but arguably a more meaningful test of piloting skill and aircraft durability) and then we travel further back in time to the Coupe Deutsch de la Muerthe and several other European races before in-depth coverage of US events takes up the remaining 2/3rds of the book. The aircraft descriptions are fairly brief and highlight competition history, personnel, and rudimentary technical tidbits. In the case of the latter, there are quite a few statements whose brevity, presumably for reasons of lack of space, will both tantalize and provoke the more knowledgeable reader. Just one example (p. 21), a discussion of the Curtiss CR-1 chain-links engine development thusly: Curtiss D-12, Allison V-1710, Rolls-Royce [in the book always unhyphenated] Merlin, Daimler Benz 601. Fistfights have broken out over lesser things . . .

For each aircraft are given (only) three basic specs—length, wingspan, engine—and racing colors. The latter is useful inasmuch as the vast number of photos is b/w, which is odd because probably none of the photos is new to the record and in many cases known color photos exist. There are few entries that have no photo at all, some have several. All are uncaptioned and the layout is such that it is not always readily apparent which entry a photo goes with. No big deal but very avoidable and therefore a sign that someone just couldn’t be bothered to combine the parts into a more impressive whole. Pity.

When all is said and done, it is simply not clear what Berliner intended with this book as it does not advance the body of knowledge in a meaningful way. It’s a useful book, handy, easy to use—but $40 is $40, and this book has competition. Berliner himself wrote a book in 2009 that is more thorough, definitely more interesting, but hampered by containing only very few illustrations: Airplane Racing: A History, 1909–2008.