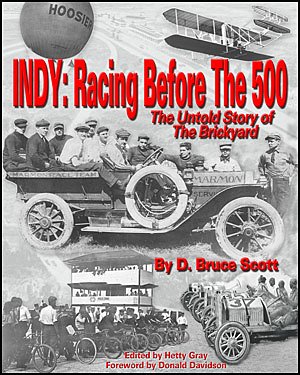 There are many—a great many, in fact—books on the International 500 Mile Sweepstakes race, better known as the “Indianapolis 500,” first held on Decoration Day 1911 at the Indianapolis Motor Speedway. There is the inevitable reference as to the “why” and the “how” of the IMS becomig the “Brickyard,” perhaps even a passing mention that there were races held prior to the 500 mile race of 1911, but precious little regarding those races. Finally, someone has produced a book covering the races held at the IMS in 1909 and 1910. That it happens to be a very good book is all to the better.

The races held at the Speedway in 1909 and 1910 are, more often than not, usually given rather short shrift in the books about the “Indy 500,” the usual coverage being wedged between the creation of the speedway, the change in the track surface, and the inaugural running of the 500-mile race. In other words, outside the problems with the races, especially the first one in August 1909, usually not very much. That even those considering themselves as “500 Fanatics” tend to be clueless regarding these races is very revealing.

It might come as a surprise to many that the first race held at the Indianapolis Motor Speedway was for balloons not cars, the national championship balloon race, no less. This event was held in early June 1909, with the University City, piloted by 61-year-old John Berry assisted by Paul McCullough, winning the race, landing 382 miles away, in the vicinity of Fort Payne, Alabama. Subsequent events involving aviation, including an appearance by the Wright Brothers, are covered in the book. This is the first time I have seen that level of coverage in a book on the Speedway. This alone would make adding it to the bookshelf an imperative.

Scott provides a very detailed account of each of the race meetings held prior to May 1911. This includes the long-forgotten and overlooked motorcycle race meeting held the week prior to the first automobile races on the track. This opening event for the Speedway did not exactly go well, partly due to the condition of the just-finished track surface and partly due to the Federation of American Motorcyclists. Rain that postponed the motorcycle events did not help, of course.

Usually, when books mention the first race meeting for automobiles in August 1909 at the Speedway, it is rarely for any other purpose than to have a hook on which to hang descriptions of the deaths and injuries that occurred during the three-day meeting. The conversion of the track from its original surface of crushed stone, sand, tar, and oil to brick is an oft-told tale and done well in this instance.

The race meetings for automobiles in 1910, in May, July, and then September, are covered in depth and, as with the coverage of the August 1909 meeting, are well-illustrated, providing sights of the meetings that are exclusively those of Driver so-and-so and his Mechanician sitting in such-and-such a machine. This is one of the great strengths of the book: it provides an element of insight into these race meetings that is nearly always lacking when this period is mentioned.

A true bonus in the book is the reproduction of 37 (of 40 known) stereoscopic photographs taken during the August 1909 race meeting. This is the first time that nearly all such existing photographs have appeared in print. This is in no small part due to the generosity of Joe Freeman (who runs Racemaker Press) who allowed the more than two dozen that he owns to be reproduced here and then Scott tracked down an 11 additional photographs from the collection of Grant Meitzler.

While one wishes that the other non-500 mile race meetings at the Speedway were also included in the book, one should be most thankful that someone took an interest in these forgotten races at all. Not only did Scott do the in-depth research but he was able to wrangle the raw data into a fluid and well-illustrated manuscript that attracted a publisher. All the more remarkable as he is a first-time author.