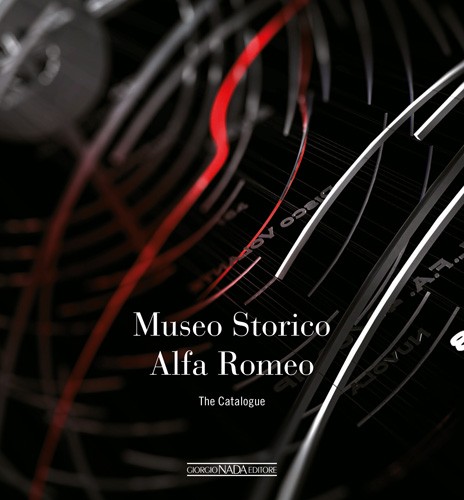 “Whatever it exhibits, the function of a museum is above all to make connections. It is required to bring together two apparently distant worlds: that of the experts, the scientists and the academics and that equally heterogeneous world of the general public. The true essence of a museum therefore exists in the way it is chosen to achieve this result.”

This book too is two things in one: the history of the firm (“long, tortured, and passionate”) and the story of the specific building in which that history is presented to the world. This also means that [a] the book follows the physical layout of the museum, which makes more sense in concrete than on the printed page, and [b] restricts its detail coverage to the 69 cars on display.

The new museum, which incorporates part of the previous structure, was opened to the public on June 24, 2015, the day on which Alfa celebrates its 105th anniversary as well as the launch of the newest Giulia model. Naturally, a book, this book, was in order. 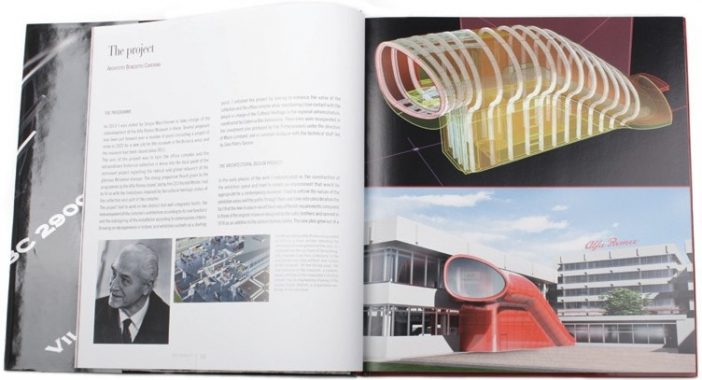 If you’ve ever been to the old museum (1976–2011, closed throughout most of 2009 for renovations) you know it was a sleepy little affair, open mainly by appointment, and you could roam the halls—and, gasp, touch the cars—without a guard in sight. 15,000 visitors a year was a big number; now 200,000+ che expected. The new museum is just the first step in a large (and not yet publicly defined) “transformation of the myth, the legend of the firm.” The architect, Benedetto Camerana, is fully conversant in Alfa Romeo history, both fact and myth, and it has fallen to him to write the first chapter in the book and explain his ideas. He does that as well as the printed medium allows, which is rather a far cry from the animated lectures he is known to give. Partly the problem is that the building and ancillary structures which make organic sense when seen and experienced are difficult to describe in words or even static photos. For instance, the key feature, the red ribbon-like walkway structure (above), part canopied and part paneled in fiberglass, that snakes (a verb chosen with intent, because it plays on the serpent/dragon in the Alfa badge) from the parking lot, crosses the entire AR headquarters complex, and terminates at the entrance door to the display area is well nigh impossible to make sense of in prose alone. 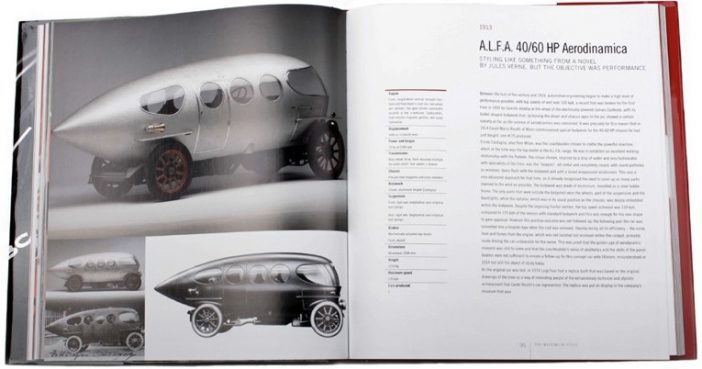 The division of the exhibit space into floors and zones is easier to grasp but here too, an abstract discussion makes it sound more arbitrary than it is: the story of the company is not presented chronologically but in the form of themes called Timeline (basically, the industrial heritage; introduced in the book by American journalist Nick Czap), Bellezza (coachwork, design; introduced by designer and Fiat Group styling chief Lorenzo Ramaciotti), and Velocita (racing, the driving experience; introduced by driver Nino Vaccarella). What this means to the reader is that it there is no way to know ahead of time which model will be covered in which section/theme; the museum visitor would just swivel his head and take in an entire floor. 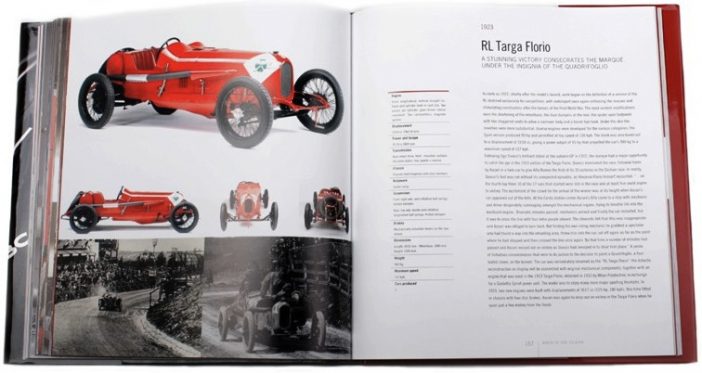 Within each theme cars are covered chronologically, one to a spread, with photos of the actual exhibit along with period illustrations on one page and text, including a detailed spec panel on the other. Products such as trains and airplanes and also engines are mentioned in the Timeline chapter but not shown. A stand-alone chapter is devoted to the Giulietta/Giulia models because they were such a special aspect of the 105th anniversary year. Appended are thumbnails of some of the museum’s 250+ vehicles (but none of the ca. 150 engines) that are not in the permanent collection and normally not accessible to visitors. 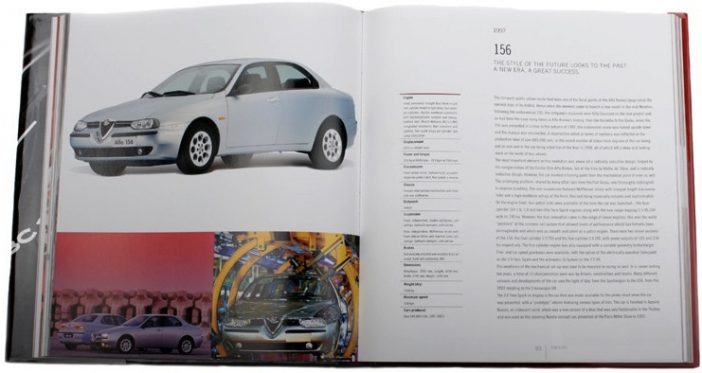 Photographically, the book is strong and thorough (even brochures, drawings etc.) but quite a few illustrations are on the small side. The translation, it must be said, is spotty.

By the time you turn the last page you may well have forgotten you’re reading a book about a museum, which would be a shame because Camerana’s building is really clever and, thought of as a didactic tool, crucial to grasping what makes Alfa special.