Motorcycle Survivor: Tips and Tales in the Unrestored Realm 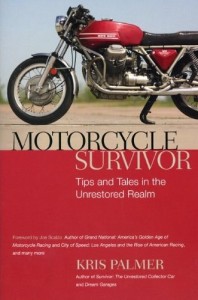 Chances are that if you are reading this, you were born after 1865. Hence you would know of a new concept German physicist Rudolf Clausius invented that year: entropy. Much like the issue of degradation it addresses, the use of the word itself has degraded over time. Central to the second law of thermodynamics and vastly complicated, it is here used in the gravely simplified sense of “the steady degradation of matter in the universe.”

Palmer’s premise is to embrace it, not to fight it. Aging is inseparable from degradation—accept it, whether it’s in the form of your wrinkled skin or your bike’s dented metal. Two years ago he wrote a similar book, on survivor cars.

Our review of that book said to read it for the questions it raises, not for the answers as there are no clear-cut ones to be had. And we will say the same about this book. Palmer firmly comes down on the “leave it alone” side and, and he is not alone in this. However, the pendulum has not fully swung to his side. Unrestored specimens may have gained wider visibility and acceptance on the concours circuit in recent years but only highly historical or otherwise significant unrestored bikes have rung collectors’ bells.

Be that as it may, the point of the book is to stimulate readers to apply their own minds. To that end, the first part of the book—entitled “Lap 1”—introduces ideas about patina and originality, criteria for deciding on restoration or preservation, and the degrees of difference between “untouched” and “not comprehensively restored.” Also explored are the notions of value and worth, both in the monetary and personal sense, and how to go about sensible preservation while maintaining usability of the vehicle.

“Lap 2” contains 13 cases studies, several dealing with more than one bike which range from the exotic to the mundane and including several from the Steve McQueen collection. Among the former would be publisher Tim Parker’s 1975 Laverda “flying carrot” 750 SFC (including it here was not his idea). The author presents himself as both a car and a bike enthusiast and has written extensively about both, but the bikes seem to get his juices flowing a tad more.

The Foreword by Joe Scalzo (dirt-track racer, author, and editor of Cycle World) talks mainly about the model K Harley. The photos are by the author and Jerry Lee (Sports Illustrated, The NCAA News etc.).