A Shipyard at War 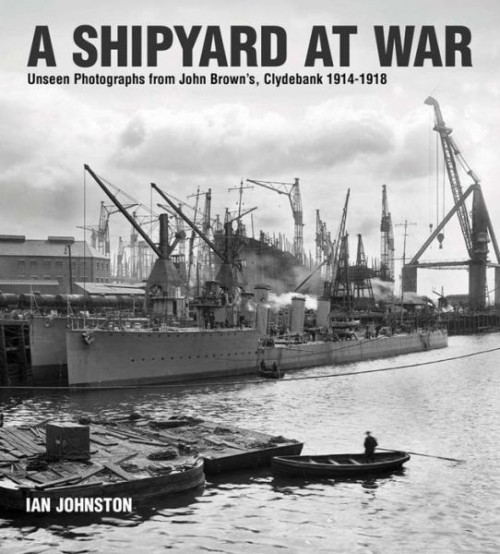 “This conflict was as much about industrial resources and capacity as it was about battle, and these images form one of the best records of industrial endeavoour in the UK, and most certainly of the early years of twentieth-century shipbuilding.”

Considering its sheer size, mechanical complexity and manpower requirements, building an ocean-going ship is hard any day of the week—and it’s especially hard under wartime conditions when normal, established business practices are suspended in favor of centralized resource planning, conflicting priorities, and ever-changing parameters for who does what when and where and with whose money.

Even if it hadn’t been for WW I, the British shipbuilding industry was in high gear anyway because the Dreadnought supership of 1906 had made all existing warships obsolete. Add to that the enormous demand for passenger liners and working in the shipyard must have seemed recession proof.

Turns out, the folks who took photos of the work fared better than the ones who did the actual riveting (and not only because of the invention of the pneumatic riveting tool)! John Brown’s, subject of this book, kept at least two in-house photographers, of the nine they had by 1919, on payroll all through the Depression.

John Brown’s built many of the most significant British ships, which would make their story important enough. But they were among the first to document their work photographically, as early as the 1880s, and then had the good sense to preserve tens of thousands of negatives through wars and ownership changes and general lack of interest in industrial heritage. Today there are probably 50,000 negatives still extant of which this book has culled 200. Moreover, from the beginning John Brown’s had their own in-house photo department (although the exact reasons for this enlightened plan are not known) with multiple employees so documenting absolutely any aspect of shipbuilding was easy—from as few as 45 surviving photos of the destroyer Fortune to over 4000 of the QE2, from keel-laying to launch.

Anyone with an interest in industrial history and in matters mechanical and engineering will find this book singularly revealing. Many of the photos are here published for the first time, no small feat for an author who has revisited this very subject in now several books. The last time was 2012, Clydebank Battlecruisers: Forgotten Photographs from John Brown’s Shipyard, and Johnston made a point of not repeating photos of three of the ships (Tiger, Repulse, Hood) that would chronologically overlap with this new book. As these are warships there are relatively few interior or kitting-out photos. Also, there are no submarine photos.

Even though Johnston has written a number of books already, and will surely write more, he takes the time to devote a dozen pages to establishing context so that the reader new to the subject can appreciate the role of the town of Clydebank (you guessed it, on the banks of the River Clyde, the second longest river in Scotland and the eighth longest in the UK), the logistics of running an operation spread out over 80 acres and employing 10,000 people, and also the consequences of the Munitions War Act of 1915 on labor relations (such as adding women to the workforce, not to forget the aforementioned pneumatic riveting tool—both of which the unions hated) and centralized resource planning. Unlike many other yards, John Brown’s had the benefit of operating extensive on-site boiler and engine shops and thus did contract work for other outfits.

“Clydebuilt” became an industry benchmark of quality and many of the yards here became household names all over the world. This excellent book invites—requires—unhurried study of the photos that make up the bulk of the book. They are thoroughly captioned but bear in mind this caveat from the Acknowledgments: “Grave danger awaits those who seek to interpret what photographs show from even such relatively recent times as the Great War.” No worries, you are in good hands with Johnston and his sources and collaborators.

Appended are a very condensed 1914–18 Shipyard Diary that gives a basic idea of the big events and then a list by order number (402–491) of the ships built during that time (name, owner, key dates, basic specs, fate). Index.

A Shipyard at War: Unseen Photographs from John Brown’s, Clydebank 1914–1918

The Silver Ghost: A Supernatural Car »
« Where the Writer Meets the Road