Heroes and Landmarks of British Aviation 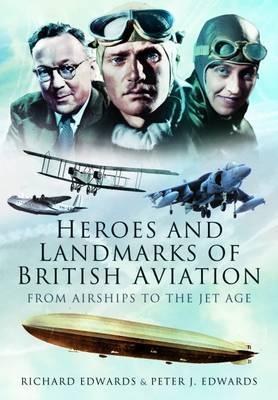 The First 50 Years: From Airship to Jet Fighter

by Richard Edwards and Peter Edwards

This book is a gem for those enthusiastic readers who want to access a detailed history of significant British aviation personalities during the last 110 years, many of whom founded companies bearing their name. Many of the names are familiar—de Havilland, Sopwith, Hawker, Handley Page, Rolls and Royce, Mitchell and Whittle. Lesser known are Willows, Shorts, White, and Blackburn.

As the subtitle implies, Richard’s commentary covers the formative period of aviation in Britain. In my view, the book’s historical coverage could have been broadened to include two other real heroes, 18th-century George Cayley and 19th-century Percy Pilcher, both of whom made huge contributions to the understanding of controlled flight.

Each of the book’s 18 chapters is linked to a “hero.” Confusingly they are not in chronological order. Chapter 1 discusses the airship achievements of one Ernest Willows which commenced in 1901, Chapter 3 jumps two aircraft generations to concentrate on Geoffrey de Havilland’s contribution to the 1934 MacRobertson England-Australia air race.

All of the creators of Britain’s aircraft companies get their fair share in this book though some people like Verdon-Roe, Blackburn, Hawker, and White died before their respective companies became major players. Avro is inevitably linked with the hugely successful Lancaster bomber that carried the famous Bouncing Bomb designed by Sir Barnes Wallis and enabled RAF’s 617 squadron to destroy the Mohne and Eder dams.

Sir Frank Whittle’s extraordinary biography that describes his development of the jet engine is a significant part of this book. Much of the story is familiar ground but one missing landmark is the extraordinary cancellation of the Miles M.52 supersonic research aircraft in 1946. This aircraft was to be powered by a Whittle engine and would have achieved speeds up to Mach 1.5.

Another amazing hero created much of his basic success in the 1930s, at the same time as Whittle. This is Sir Robert Watson-Watt who essentially conceived the idea of radar, proved that it would work, and thus made possible an aircraft detection system that ensured success in the Battle of Britain. As with the development of the jet engine, the Germans paralleled the radar story.

The United Kingdom’s aerospace industry emerged from WWII in fine fettle with totally integrated airframe, engine, and electronics companies. Compare this with the situation on the other side of the English Channel where France’s aircraft industry was in tatters as a result of the destructive Nazi occupation. In less than 20 years, thanks to excellent planning by sophisticated and very able civil servants, the French aerospace industry overtook Britain’s which had suffered from poor program decision making in the postwar years and political wrangling. By the year 2000 it was impossible for the UK industry to build a complete transport aircraft in the UK. A sad reflection of the fact that fifty years earlier the world’s first jet aircraft had been created there.

One of the most important chapters in this book is devoted to the story of the political rationalization of Britain’s aircraft industry. When France created Airbus in the early 1960s and announced the country’s intention to design and build large jet transport aircraft, the British just guffawed. However by 2012, when this book was published, Airbus owned a large portion of the UK airframe industry, balanced by British Aerospace plc who builds fighters and jet trainers.

The book is an excellent read and Richard Edwards is to be congratulated on amassing a huge amount of fascinating detail. He has dedicated the book to his late father who helped to put together much of the older company history.

One Appendix presents a flowchart that graphically shows the history of British aviation companies’ mergers and acquisitions since WWI, another lists significant UK aviation museums. There is a useful 4-page Bibliography and a very comprehensive Index. There are 19 excellent half-page b/w aircraft photos and 16 of the heroes.

Edwards Sr., who had joined the RAF in 1945 and later became a schoolteacher, wrote The Rise and Fall of the Japanese Imperial Naval Air Service in the late 1980s but died in 1992 before the book was ever published. This did not happen until 2010 (same publisher), after Edwards Jr. had been given his late father’s papers by his mother and spruced up the material, some of which was then used in this present book. It seems a nice touch but is really just coincidence that the Heroes book came out 20 years after Peter Edwards’ death.

Heroes and Landmarks of British Aviation

The First 50 Years: From Airship to Jet Fighter

by Richard Edwards and Peter Edwards

Origin of the Checkered Flag: A Search for Racing’s Holy Grail »
« Portal to the Corps: Chronicling the National Museum of the Marine Corps