Bert Hadley – A Son of Birmingham 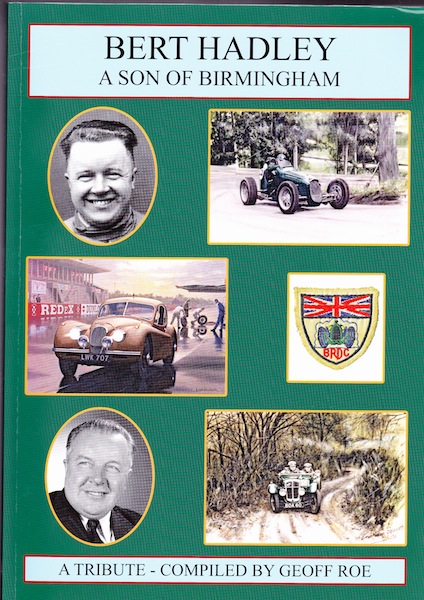 I was privileged to see this book in manuscript form and made a few comments on it then. A colleague read the finished book before passing it to me saying, “I feel I now really know Bert Hadley.” What fuller praise could you have for a biography?

The author came to know Bert Hadley in later life. He said, “From his firm handshake, twinkling eye and his ‘Brummie’ accent I knew I was in the presence of one of my sporting heroes.  As it turned out that meeting was to have an effect on my life . . . Bert was to become a surrogate ‘Uncle’ to me offering wise council when I needed someone older to talk to . . .”

Bert had thought of writing his life story but never did, though he did leave behind many notes and diaries and the author has been able to quote extensively from these, which brings us closer to Bert than an ordinary biography might have done.

To most of us, I suspect, Bert Hadley is best known for his sporting achievements in Austin 7s  and principally the famous racing twin cams.

Whist some of this may have been recorded before, his varied racing career after the war is just as interesting.

He joined Austin as an apprentice in March 1927, moved to the Experimental Department in 1930, and became involved with the racing side of the factory. Bert Hadley recorded all his successes in trials, speed trials, hill climbs, and racing prewar, some 60 events in four years. He trialled in a number of cars but mainly the “grasshopper” team, and raced side valve and twin cam Austin 7s.   These make very impressive reading. He does not record those events where he was not classified as having won something!

What is not so well known is that Lord Austin had been persuaded to loan Bert to ERA for him to drive in the 1939 Donington Grand Prix but that event was cancelled because of the war.

After the war Leslie Johnson persuaded Bert to join him in his early Jaguar XK120 at the 1950 Le Mans where they would have finished third if the clutch had not given out in the last hour. He became very involved in the development of the Jowett Jupiter and raced that at many circuits as well as factory Javelins. Then came the “Seven days and seven nights” in Johnson’s XK120 at Montlhéry in 1952 when Bert was in a team with  Johnson, Moss, and Fairman. He drove a Healey 100M in the Targa Florio, a Nash Healey at Le Mans, and a Triumph TR2 at the ill-fated 1955 Le Mans.

All of this and much more is described in the book. There is an interesting chapter entitled “Bits and Pieces” that covers material that did not fit naturally in the chronilogical order of the book. There is an Appendix illustrating the many letters he had received from people like Lord Austin, Sir William Lyons, Bill Heynes, Leonard Lord, and others. Bert died in July 1993.

After reading this book I  felt that I too really knew Bert Hadley.

Bert Hadley – A Son of Birmingham