The Ferrari Phenomenon: An Unconventional View of the World’s Most Charismatic Car 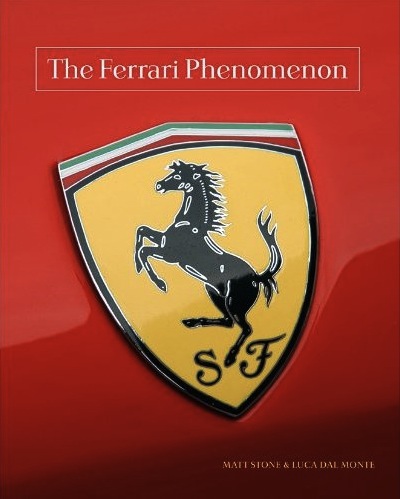 The subtitle helps get a handle on this book: Unconventional. It is obvious from the first sentence in the Introduction that the authors asked themselves the same question a reader would: Another Ferrari book? Inspired by their own biographical moments—the lasting imprint of a red car from Maranello on impressionable teenagers’ imaginations—both of them nurtured a long-standing desire to contribute something to the Ferrari universe. Both are media people, so a book was the way to go. Stone is an automotive journalist, broadcaster, and photographer, and a book author and Motor Trend/Motor Trend Classic editor. He still doesn’t have that GTB/4 he’s lusted after since he was 17, and at today’s prices he may never. Dal Monte is a bit of a Ferrari insider, having handled corporate communications for Ferrari/Maserati North America for four years. He has also written several books, in Italian, about Ferrari, most recently the political/spy novel La Scuderia at whose heart is Ferrari’s press officer being wooed by German and British intelligence services prior to World War II. So, clearly both men have Ferrari on the brain.

They’re sympathetic to their subject, and their enthusiasm shows. Rather than inflicting on the world another same old/same old soon-to-be-remaindered book regurgitating the firm’s storied past we already well and truly know, they went a different way and offer a look at what they call “the lighter side of Ferrari.” A bit of biography, a bit of trivia, a bit of weird and wondrous facts and stats, memorable quotes, celebrity owners, spectacular crashes, all garnished with lots of sumptuous photos and dressed in a crisp design. The latter two features are this publisher’s calling card and while one would expect no less, it must never be taken for granted or go unlauded. Need we say that the book’s dominant color is red? 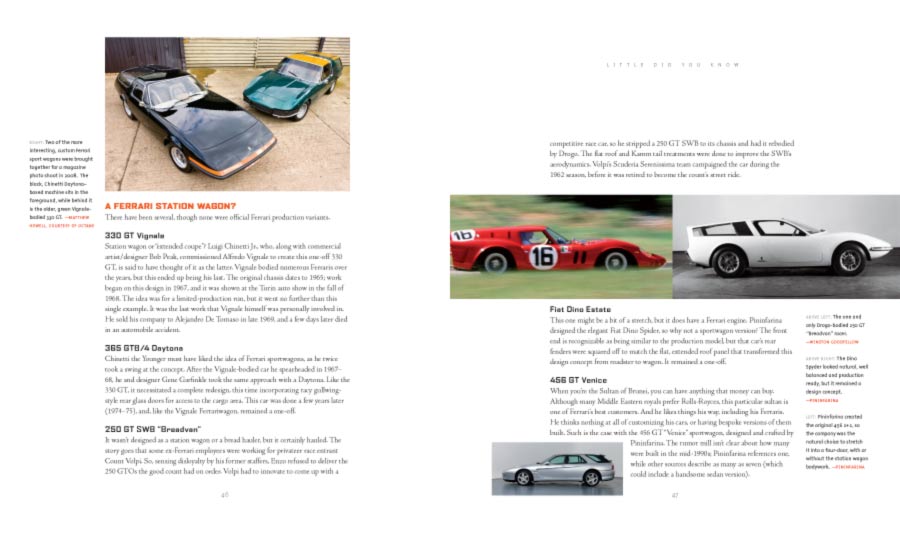 The first chapter, “La Famigila,” is rather different in scope and tone from the remainder of the book. The authors present as multi-faceted a picture of Enzo Ferrari as the relatively little we truly know of this enigmatic man allows. He was complex, complicated, certainly conflicted, and one even wants to say willfully confused about particular issues in his life. He knew he was a bully, he described himself as a despot, “loved by few, respected by all” suited him just fine, he stayed with a wife he didn’t love for decades and mourned the loss of his only child (Dino) with her while one town over the woman he truly loved and the son who is now VP of Ferrari (Piero) lived in obscurity. Complicated. The authors describe all this but they do not—cannot—explain it because Ferrari wore a mask in his public as well as his private life, possibly even in front of himself. Even in the five books he wrote himself or the journals this lifelong diarist kept, the core of the man remains veiled, ambiguous, and spin-doctored. But even without an explanation, the portrait of Ferrari that emerges in this chapter will show readers details they did not yet know at all or certainly not in this organized a form.

The aptly named chapter 2 “Little Did You Know” also deserves a few words. Its contents will spruce up your cocktail party small talk! How did Ferrari come to use his signature purple ink? Are there Ferrari station wagons? Did you know that Ferrari asked DeLorean for a bid to make their turbos? Ferraris in movies. Ferrari racing planes. Like the authors say, the lighter side. . . .

The remainder of the book is mainly about Ferrari the company and its products. There may not be any great revelations here, the main attraction of the material is that it is all in one place which will be hugely attractive to people new to the marque and the Ferrari lifestyle. The book is also a great primer for anyone wishing to visit the factory, even listing restaurants in the area.

Route 66: The Empires of Amusement »
« Celebration of Flight, The Aviation Art of Roy Cross