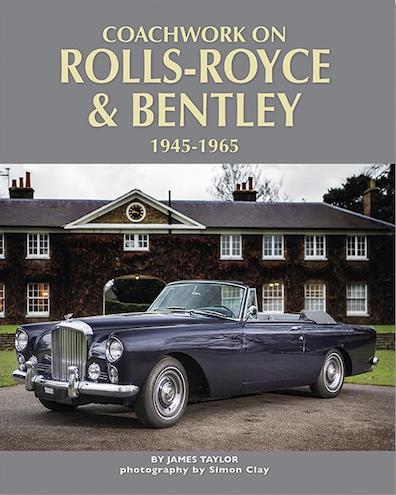 Coachwork enthusiasts generally fall into three categories of interest: prewar (World War II), postwar, and modern cars. James Taylor has written books on all three eras. This one concerns the postwar Rolls-Royce and Bentley motorcars*, constructed as “body-on-frame”, that were produced until the debut of the Rolls-Royce Silver Shadow/Bentley T, the modern models that introduced monocoque (unibody) construction to the marque. The difference between body-on-frame and monocoque construction is, essentially, the raison d’être of Taylor’s book.

After WW II, the company made, for the first time, a complete car. As noted, these were made with a rigid chassis that accommodated the erection of a separate body. Even though a complete car was available, a door was left open to customers who, like their prewar counterparts, desired a coachbuilt body.** And Taylor, through his quite thorough research, found 56 different coachbuilders who fashioned bodies and fitted the interiors on the chassis of the various models produced by Rolls-Royce from 1945–1965. These included, among others, the Bentley Mk VI, the Silver Wraith, the Silver Cloud, and the Phantom V. In the introductory chapters, Taylor explains, with admirable clarity, all of this in detail. 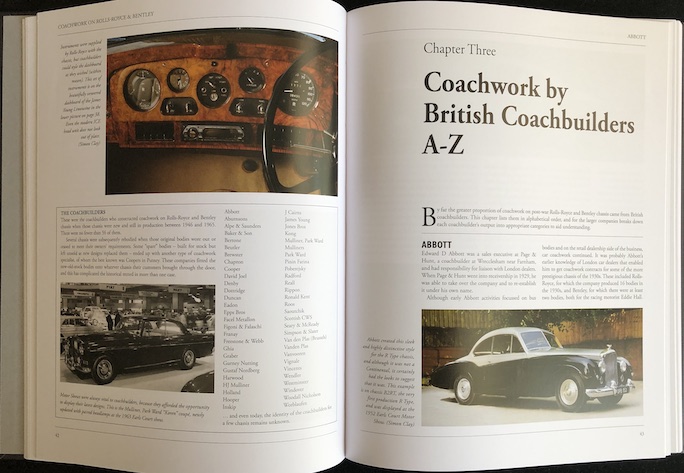 Among the many distinctions that accrue to Rolls-Royces and Bentleys is that their chassis numbers have been uncommonly well recorded from the beginning. The various custodians of this material (mostly the marque clubs) make it readily available to anyone who knows to ask. From which follows that any book that wants to be taken serious in the RR/B world had better use and list this data. The heart of Taylor’s book is a listing, alphabetically, of coachbuilders that includes a further listing of their various available models. Taylor’s research is thorough, and it would not be wrong to say that these lists are compiled as comprehensively as humanly possible. 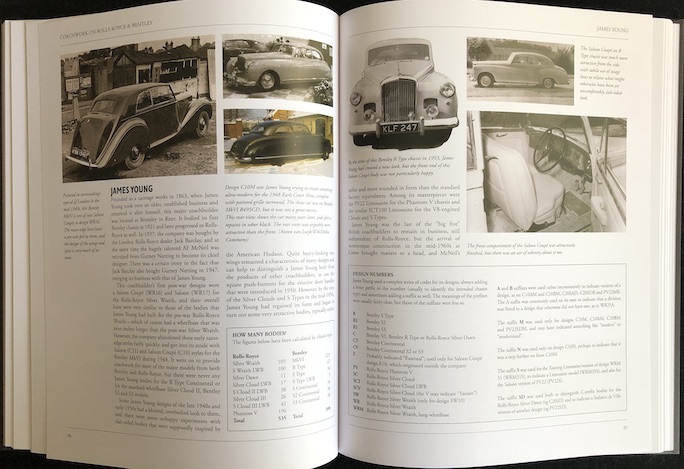 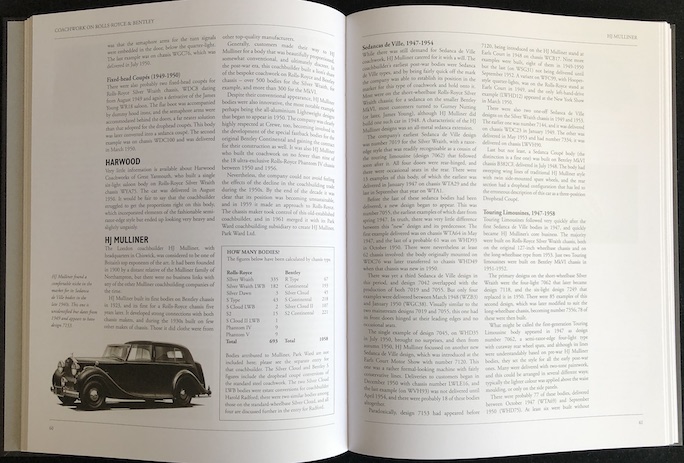 Is this book, then, of interest only to marque enthusiasts? Yes and no. The many pages comprising the aforementioned lists, although a boon for the truly dedicated, may quickly become mind-numbing to the casual car buff. That said, the chapters discussing how the coachbuilt cars were made; the make-up of the chassis as delivered to the coachbuilder; how Rolls-Royce exerted control of the finished product; the give-and-take among the customer, the coachbuilder and the factory; and the instances of bodies being switched from chassis to chassis, all of these things, should satisfy anyone with even a modest interest in the subject. The brief history of each coachbuilder, longer for the major companies, makes for valuable reading also. 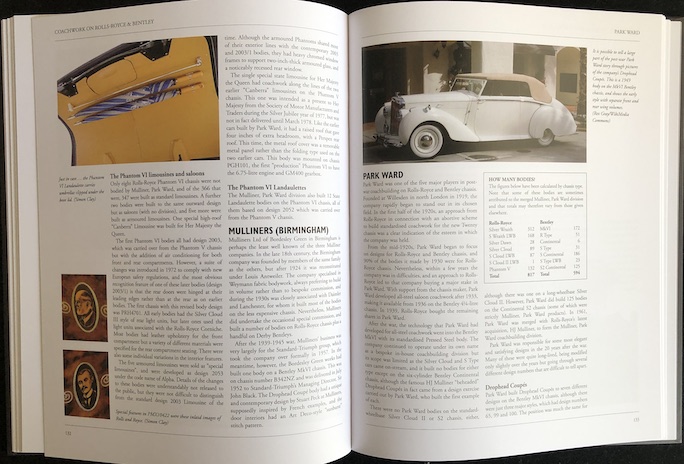 The book is chock full of photos. Many are vintage, and, as Taylor points out, this insures that we can know the original appearance of a given car (obviously not the color). Many others are color photos of the cars as they are now, and, while useful and attractive, those taken at car meets or the like suffer the inevitable shortcoming of a crowded environment. Such photos, by their nature, are burdened with the distraction of spectators and the other cars on the field. Would it have been that difficult to tap into more of the personal archives of the many enthusiasts, both professionals and amateurs, who, with few if any exceptions, are always generous in sharing their photographs for a book like this one?  But this is a minor equivocation and should not deter anyone who has found in this review a liking for Taylor’s book. 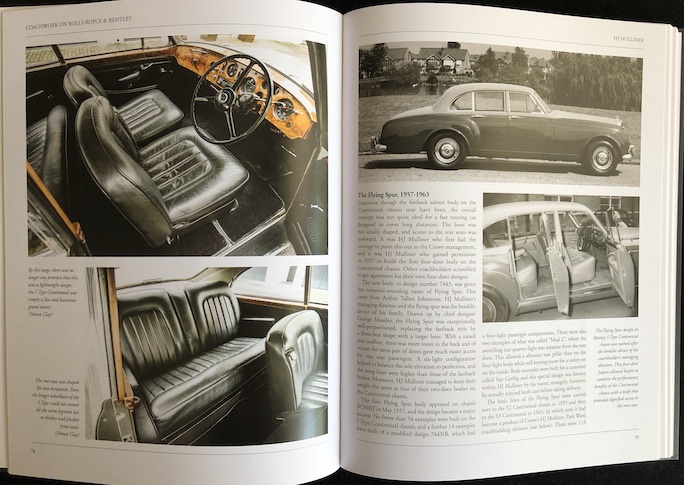 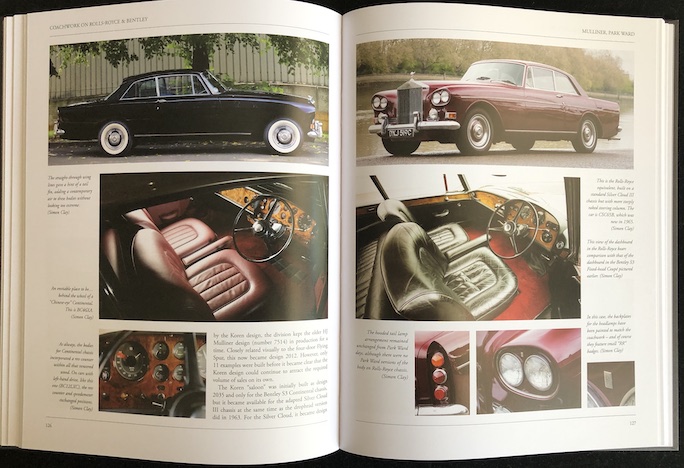 Sometimes a book inspires more than one reviewer to render an opinion. Everybody does see different things, or sees things different so every now and then we may post such musings for your enlightenment.

That this volume is reflective of James Taylor’s typically meticulous research and superb technical writing is, of course, understatement. I agree with all the accolades concerning the book’s attributes in the above review, but there are shortcomings the potential purchaser should be aware of before committing to its purchase. Taylor goes to great lengths to describe virtually every new design offered by the major coachbuilders, even including the design number, but the physical limitations of the book and the inevitable editorial conflict between text and illustrations often leaves the reader somewhat frustrated as described designs do not have an accompanying photo to give “life” to those descriptions. That’s the bad news. The good news is that a solution to that problem is readily at hand and may already be on the bookshelf of the serious coachwork enthusiast’s library: Lawrence Dalton’s Rolls-Royce, The Elegance Continues, published by Dalton Watson Ltd., London, in 1971 (ISBN 901 564 052). A relatively early addition to the growing list of titles of identical dimensions devoted to coachwork on various marques of importance, it matches the size and format of and is the sequel to Dalton’s earlier Those Elegant Rolls-Royce, which confined itself to pre-WWII coachwork and continues the story into the postwar years through the end of the coachbuilding era. Dalton appears to have anticipated the need for such a book a half-century ago, as in the majority of cases, but alas, not quite all, he has conscientiously included the coachbuilder’s design number in the photo captions. Since the book is formatted in individual chapters on each coachbuilder, finding a photo to match the description in Taylor’s book is usually a simple task. Those few that are missing are most likely due to that information not being available at the time Dalton was composing his volume. Though it doesn’t fill in all the gaps, it comes admirably close, so its value in that regard should not be underestimated. It has been out of print for many years, but a recent check of online book sources shows copies to be available with prices ranging from reasonable to exorbitant. Unfortunately, in many of the cases, which involve international sellers, while the price of the book is reasonable, the associated shipping costs can only be described as excessive, if not exorbitant. Only you can decide if the total cost is acceptable. In any case, if you don’t already have it, I’m confident you’ll find it worth having on its own and it will fit in perfectly with the other Dalton Watson titles already resident on your bookshelf.