Peace was Their Profession—Strategic Air Command: A Tribute 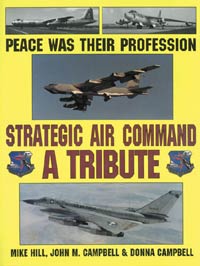 The title is derived from the Strategic Air Command’s motto “Peace is Our Profession” which insiders—who have earned the right—often amend to include “War is Our Hobby.” An alternate version is “Peace Through Strength—Victory Through Devastation.” Either one speaks without ambiguity to this command’s mission. Over a million personnel served in it. Talk to an SAC member and you’ll hear in no uncertain terms that the Cold War isn’t just “over” but it “was won”—thanks to the SAC. As one of the three major commands emerging, in 1946, out of the United States Army Air Forces (USAAF), the SAC’s primary mission was to conduct long-range strategic combat missions anywhere in the world. Bombers in other words. Since wartime experience in Europe had shown the bombers’ vulnerability to enemy fighters the SAC also maintained a fighter force until 1957. What all this means is that over its 46-year life the command handled a lot of hardware—and much of it is shown here.

Military service requires a large amount of idealism which adds an emotional component to an activity bent on destruction. And it is because of this emotional component that ex-SAC members will be quite moved by this tribute. For those who were there, this book is a memento of their very own lives and sacrifices. The reader who just wants to see pictures of airplanes needs to accept that this is a book by and in the main for SAC folk. In other words, the writing is not value-neutral but informed by a sense of pride and conviction in the mission. This should not cause a conflict insofar as the facts are concerned but the narrative that introduces each decade has a discernible, particular point of view.

The story is mainly told in photos, almost 800 of them. Many of them were taken by service members—remarkable considering the service’s tough stance on mission security—as well as official Air Force photographers. Many of them are far from perfect, a combination of amateur photographers, less than ideal conditions even for those who know what they’re doing (light, vibration, bulky flight suits etc.), and equipment limited by the state of technology at the time.

Each decade is introduced by 2–3 pages of narrative that summarizes the main challenges, operations, achievements, and evolution of doctrine as well as various anecdotal tidbits such as the first “broken arrow” (wayward nuke) or the role of women on tanker crews or missile silos. There are no lists (aircraft data, specs, COs, etc.) whatsoever. The photos identify the type of aircraft, sometimes also by serial number, squadron, theater of operation, or date. Occasionally, there is a certain brevity evident here that non-military readers may find difficult to decipher. Many aircraft are shown repeatedly, even in the same marks or variants. Since they can have a long service life, the same type may be shown across several chapters/decades, often many pages apart. There is no index so the only way to see every single photo of any one particular item is to hunt and peck.

Aircraft are shown in the air and on the ground, the latter adding a particular sense of place and time. Students of Presidential history will be interested in the several images of the 1st Airborne Command and Control Squadron which the SAC absorbed in 1975. Up until a few years ago images of the SR-71 Blackbird were kept under lock and key; here there are several. Many planes that today are among the rarest of the rare—B-36, B-47 etc.—are shown here in abundance and there are several very interesting air-to-air refueling photos shot from the respective planes’ cockpits in sequence so as to illustrate the entire procedure. Closing chapters cover nose art and aircraft in museums. Appended is an alphabetical listing of SAC crew who died in the line of duty.

Among Mike Hill’s several other books is the related Tactical Air Command, An Illustrated History 1946–1992 for the same publisher. Schiffer books are always worth a peek below the book jacket. This one has the SAC emblem printed on the cover. It also has interesting marbled endpapers.

Art of the Formula 1 Race Car »
« The Science of Formula 1 Design: Expert Analysis of the Anatomy of the Modern Grand Prix Car