The Cars of Pullman 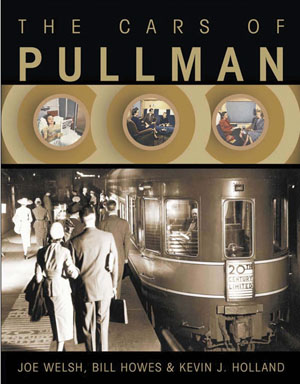 Hotels on wheels—incorporated in 1867 as the Pullman Palace Car Company, New York cabinetmaker George Mortimer Pullman’s eponymous railroad cars crisscrossed North America for 102 years. They became a household word, so much so that especially sleeping cars were often generically referred to as Pullmans regardless of who made or ran them. Entire trains, if their owners could afford it, boasted they were “all-Pullman”—sleeper, lounge, parlor, restaurant, and observation cars (later also freight cars). In its heyday more than 100,000 people a night found a place to bed down en route, all thanks to George Pullman’s own disappointment—and discomfort—at having to spend one night too many sleeping in his seat on a train trip.

Talk about having the right idea at the right time: in the 40 years following the company’s founding, railroad track mileage grew from 39,000 to 229,000 miles.

Pullman so much monopolized this market that in 1944 the government found against the firm in an antitrust action triggered by a competing manufacturer, The Budd Company, forcing Pullman to divest itself of either the operations or the manufacturing part of the business. Already weakened by the change in travel habits brought about first by the Great Depression and then the emergence of commercial airliners and, later, the proliferation of the automobile and the 1956 federal legislation to create an Interstate Highway System, the company’s star waned after the 1920s. No matter how much or how quickly it updated its cars, from 1946 until the end, expenses exceeded revenues.

All this is told here. Not for the first time, mind you. Pullman being an iconic American company, much has been written about it already but still this book manages to pull almost 50% new photos out of the hat. Authors Welsh and Howes already collaborated on a similar title, Travel By Pullman: A Century of Service (2004). All three authors are well-known train historians with published works in books and train magazines. Moreover, Howes was a Pullman Co. director and past president of the Railway & Locomotive Historical Society.

Divided into four principal eras the book explains the history of the sleeping car (which predates Pullman), the company’s operating model (building cars then leasing them to railroads or private parties); describes the construction, design, paint schemes, and furnishings of the rolling stock; routes; and follows its business fortunes. For someone who is only now discovering Pullman this book is a really sound and visually rich introduction and even the railroad cognoscenti will still find new bits, especially among the many illustrations from a number of private collections. Photos show interiors and exteriors and there are several ads, brochures, and arrangement drawings. Some of the photos are stills taken from a Pullman training film.

It should be said that the book focuses more on the what than the how. For instance, a reader would wonder just how Pullman, in those pre-computer days, went about the incomprehensibly complex task of moving individual train cars on a just-in-time basis to cover a sudden breakdown at a remote whistle stop. All you’ll find out is that some local clerk sent a coded telegram and that Pullman kept spares at certain hubs but you won’t learn by what means the car got to where it was needed. There are several aspects the book does not get into, such as the cost of the cars (for example, an early “Pioneer” car rang up at ca. $20,000 and a 1924 sleeper at ca. $38,000—serious money!), details about private-car commissions, or other products the firm produced: streetcars and trolley buses.

Clearly outside of the scope of the book but probably worthy of mention at least in passing for the sake of the reader who is new to the subject would have been the bitter Pullman Strike of 1894 that required US Marshalls and Army troops to break up, resulted in a Supreme Court review of U.S. President Grover Cleveland’s authority, and prompted a national commission formed to study the causes of the strike to pronounce Pullman’s company town “un-American” and the Illinois Supreme Court to mandate its annexation by the city of Chicago. Likewise one of the most powerful African-American political entities of the 20th century, the Brotherhood of Sleeping Car Porters, has a direct Pullman connection that remains unmentioned.

People with an eye for book design will appreciate the challenges the book designers faced in creating an appealing and purposeful theme for the presentation of a basically visual topic that is of its time and in its time, in other words continually changes—from the color and lettering of the cars to period advertising to furnishings and even the material of the cars themselves (wood, then steel and aluminum). The colors in the book, the fonts, and the layout of the chapter openers reward attentive study.

Anyone visiting the Chicago area should be aware that the Bertha Ludlam Archives at the Pullman State Historic Site, currently housed at the Hotel Florence in Chicago’s Pullman Historic District, present the history of George Pullman’s Town and Pullman Palace Car Factory site as well as the history of neighboring Roseland, West Pullman, and other local communities.

Posted Under: History, Trains | Author: Sabu Advani | No comments yet