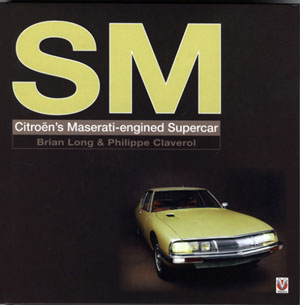 How many cars do you know that were both state vehicle and rally car?

The Citroën SM (1970–75) was a tour de force par excellence. Or, in ‘Murrican, it was out there, big time. All-alloy V6 Maserati engine, fully powered self-centering steering, rain-sensing wipers, extravagant coachwork, deluxe appointments, 1971 European Car of the Year, 1972 Motor Trend Car of the Year, disk brakes at all four corners plus a long list of features already introduced on SM predecessors but considered exotica by most any other maker. To name but a few: oleo-pneumatic self-leveling suspension, lights that turned with the steering, button-operated brakes. Citroën was France’s leading carmaker at the time but its range of models had become long in the tooth and the radical SM (after “systeme Maserati”) was to be the flagship luxury high-performance sports tourer that would restore luster to the marque—the type of prestige car André Citroën had in mind when he displayed at the 1935 Paris auto show a V8 22CV version of the Traction Avant but, for lack of funding, was not able to put into production. And the SM was on its way to being that car until Citroën—well, read the book!

For English-speaking enthusiasts this is the go-to book, combining a good model history with an abundance of photos and the sort of source material (owner’s manuals, promo brochures, ads) owners and collectors could spend years looking for the originals. Written by two Westerners in Japan—one, Long, a long-time British motoring writer, the other, Claverol, a Frenchman who was President of Citroën Czechoslovakia and at the time of writing the book, President of Citroën Japan—the book received full cooperation from the company. The first 25 pages present a brief history of the firm, nicely illustrated with interesting ads and such iconic images as the 20 ft gear wheel whose chevron-shaped teeth gave the company its logo, or the Citroën name and logo displayed in lights on the Eiffel Tower 1925–34 or the nun looking at a DS19 at the 1962 Paris Salon. (The latter two are emblematic cultural-heritage must-know photos!)

A description of the 2CV–Safari models with specs and side, front, and rear views sets the scene for the genesis of the SM. A sidebar explains the Maserati story in the briefest of detail and there is really no meaningful background given on the Maserati/FIAT/ Citroën connection. SM design and model development are covered in good detail, supplemented with many excerpts from press reports and road tests, and well illustrated with the always delectable design drawings, prototypes, and workshop photos. Most unusual for a book of this kind, the authors elected to reproduce, on some 30 pages and in reduced format, the entire, rare French press kit (no translation!). The general-interest reader’s eyes will probably glaze over at this level of detail but for the owner stuff like this is manna from heaven. Later in the book the French 1972, the UK 1972, and the 1972 and 1973 US catalogs are reproduced and there are also several pages of reproductions of the domestic service and repair data sheets in French. Also in French are the callouts on the many technical and exploded drawings and cutaways. A fantastic number of SM ads from all over the world are shown as well as many auto show shots and several postage stamps featuring SMs. With the exception of two restored Citroëns all the car photos are period ones.

Closing chapters deal with the “breadvan” rally version, the Guy Ligier race cars, specialty coachwork, state cars and the successor models/proposals: CX, XM, Activa 2, C6. There are only minimal information and no photos of the three rhd UK-market versions. No reference is made to SMs in film or artwork or of the significant celebrity ownership (from Cheech & Chong to Leonid Brezhnev). Appended are production figures by model year and by engine/transmission version. There is no Buyer’s Guide. Simple Index.

The Marmon Heritage »
« Abarth: The Man, The Machines