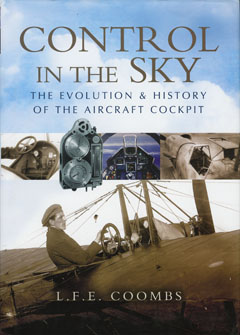 “It is important to emphasize that until about 1915 a pilot was not very dependent on instruments. The most important “instrument” was the sound of the engine. If it did not sound healthy, then greater attention would be paid to the rpm and oil pressure instruments.”

Ever picked up a rental car and had no idea where the switch for opening the fuel filler door is or how to heat the seats? or settled into certain older cars not realizing that the gas pedal is in the center? Standardization and intuitiveness save lives, even more so in the air when you’re going 1000 ft a second and everything has to happen real quick.

As author Coombs says, no other environment is “so unforgiving of error, lack of attention, carelessness or inadequate training on the part of the human element.” The rudimentary simplicity of the earliest aircraft is as difficult to grasp as today’s unfathomable complexity in terms of mechanical and electronic systems. The modern-day pilot would, in fact, not be able to control his high-performance aircraft if it weren’t for fly-by-wire and a host of other electronic helpers and minders.

Strictly speaking, the origins for this book lie in an article written for Flight magazine back in 1956. After a professional life in human–machine interfaces, author Coombs still has a few things to say about cockpit design. This book is just one of several books and numerous articles he has written on the subject, along with a tall stack of other transportation- and Sherlock Holmes / Conan Doyle-related titles. So much for a quiet retirement.

That Coombs is a consummate practitioner and used to a professional audience is evident in the ease with which he dispenses reams of facts but also in the somewhat relentless pace that may well have the novice reader struggling to keep up. After just a few preliminary words you’re right in the thick of things: joysticks, pitch and roll, and what feet, arms, and fingers do.

The book begins with a discussion of the Wright Flyer and other contemporary craft—audience participation is definitely helpful: act out what the text and drawings describe to get a real sense for whether or not arm and foot movements are intuitive. Going up or down, or right or left is one thing but what about up and right, in a crosswind, while increasing speed and adjusting the mixture and aiming a gun? How many hands do you need, can you do it without thinking, how quickly? Is a pull-to-open throttle movement (French, Italian, Polish until after WWII) more natural than the now universal push-to-open to increase power? Imagine the consequences for, say, a British pilot in a US fighter initially modified for the Polish air force getting this wrong in the heat of battle (it happened!). It would take decades for pilots, designers, and governments to see eye to eye on this.

Divided into eras from 1914 to 2005, the book examines military and civil (airliner, business, private) cockpits separately (including rotorcraft), closing with one chapter each on simulators, and cockpits of the future and ground-controlled aircraft. Appended is a very interesting treatise on rules of the road and the sea which explains how mounting a horse or right-side dominance have conditioned behavior and conventions that have influenced something as seemingly far removed as aircraft cockpit layout. Brief Chapter Notes and a Select Bibliography open doors to further study; the Index is comprehensive but printed in microscopically small type.

Readers who are in fact at home in the cockpit need to know that the workstations of other flight deck crew (navigator, flight engineer, radio operator and the like) are not considered here but are in a related book, Fighting Cockpits (Airlife 1999).