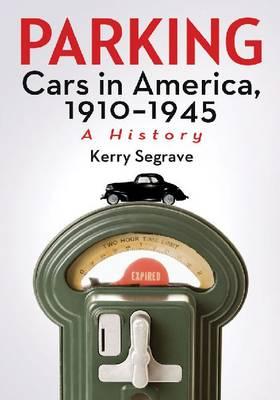 As long as people prefer personal transport over public transport there will be problems with where to put all those vehicles. People want to travel directly to work, school, or shopping precisely when they want to, not when the inconvenience of predetermined schedules allow. Energy efficiency and the dictum of the “greater good” loses out to a lifestyle based on instant gratification and the psychological satisfaction that personal control over one’s travel life can bring. But this freedom comes at a cost, a cost everyone pays for even if they don’t even own a car.

If you do own a car, you probably have a garage at home. But where do you park when you’re not at home? This book gives a quick thumbnail history of parking: how the problem started and grew, and the unsuccessful attempts at solutions as the auto industry began expanding in the early 1900s. Very quickly the US went from a few thousand privately owned cars to millions of cars in the 1920s, increasing to about 300 million cars today, all hunting for a spot to park as close as possible to the final destination. When visiting public facilities—stores, offices entertainment venues—where to park becomes a serious problem. The size of the vehicle demands huge quantities of physical space to “store” the car at the destination until the owner returns to drive off to some other destination, where the problem is repeated.

Very early on (1812 England) the illegality of using publicly owned roads and streets for private parking by the few was firmly established. Parking privately owned vehicles on any publicly owned thoroughfare was viewed as counterproductive, clogging up the citizen-owned thoroughfares when the idea behind road building was to make travel easier, not harder. Downtown Los Angeles in the 1920s became inaccessible during busy parts of the day. Chaotically parked cars helped block intercity rail service and average travel speeds dropped to well below walking speeds. The problem was a national one with even little cities in Utah fighting over how to free up travel through town.

The end result of this private car parking conflict was a transformation in the lifestyle of the nation’s population. City centers diffused into outlying suburbs as insistence on using a car to go shopping for goods and services caused the evolution of shopping centers with parking lots larger than the floor space of the stores themselves. City centers stopped being places to live and shop, and use of intercity light rail for efficient transportation all but disappeared. Parking meters, invented in 1935, soon swept across the nation and solved the problem by charging money to park on a public street. The incentive was to encourage the private car owner to get in and out of the city center quickly, allowing faster turnover of the available parking spaces. It worked where dozens of other logical ideas failed. The illegality of allowing parking on public streets was worked around by mandating that the money collected could not be used as a general fundraising mechanism for the city as a whole. All those quarters, nickels, and dimes must be used in support of the cost of maintaining the parking system, not for other public and/or city expenses. Surprisingly, the reason parking meters spread so fast throughout America after World War Two was because the public supported their installation, recognizing their effectiveness. Instead of people parking all day, they now parked in a metered space, did their business, and then moved on relatively quickly. My grandmother, however, disagreed vehemently with the whole concept when parking meters came to her small California town, not only refusing to put money in the meter, but throwing the ensuing parking tickets away unpaid, daring the city to come and arrest her. They didn’t, of course. Times were different and laws at the local level were enforced selectively. Perhaps they still are.

The information in this book is primarily based on newspaper articles from the time periods discussed, and as a result is more of a popular history of parking, avoiding digging into the controversy surrounding the economic and political struggle between light rail and the auto manufacturers. The book does become lively, however, when the story goes behind the scenes of the invention of the parking meter. The same fellow who exposed the highly political and graft-fuelled 1920s Teapot Dome oil scandal (Carlton Cole Magee) narrowly avoided going to jail on murder charges and ultimately dreamed up the parking meter while editor of the Oklahoma City News. His meter’s success prompted him to drop out of the newspaper business and concentrate instead on making money manufacturing what many people nicknamed one-armed bandits. While parking meters solved the parking problem in small cities, the ultimate solution for large cities like Chicago, New York City and others was to ban street parking in their inner city business districts.

The book lacks photos of the congested city streets from the early beginnings of the horseless carriage age up to 1945, which is too bad because an abundance of photos does exist and they do demonstrate the traffic flow chaos. Click here to see a continuous seven-minute movie reel of traveling down Montgomery Street in pre-1906 San Francisco. Not a pastime for the weak of heart. For more modern and hopefully intentionally humorous conflicts surrounding public parking controversies, seek out Triberg Parking on the Internet.

An introductory Table of Contents opens the book, followed by a Preface and Introduction. At the end of the ten Chapters there are nine pages of Notes, and eight pages of Bibliography, followed by four pages of Index. The author, described by his publisher as a cultural historian, lives in British Columbia and has written dozens of light history books on such diverse topics as drive-in theaters, lie detectors, jukeboxes, smoking, and ticket-scalping.

Posted Under: Automobiles | Author: Bill Ingalls | No comments yet