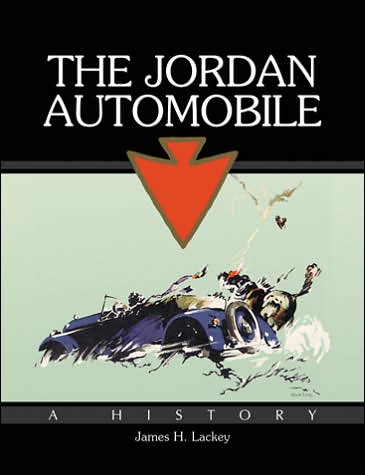 This book was published in 2005 and has been gathering well-deserved praise ever since. The Jordan car was an assembled product, using other companies’ motors and drivetrains rather than building those components themselves. The aluminum bodies, bright colors, and leather and wood interiors were designed, manufactured, and applied by Jordan at their Cleveland plant. When introduced in 1916, the car was immediately popular and marketed to a specific audience that purchased the cars as fast as they could be assembled.

To today’s eye the Jordan style probably looks very similar to other cars being sold during the same time period. Close examination reveals a car slightly sleeker than other cars of the day with a smoother exterior, a softer and quieter ride, and a comfortable and welcoming interior that appealed to upwardly mobile young college-age women and, as a result, to men interested in attracting the attention of those women. The congenial, hard-drinking whirlwind founder of the company, Ned Jordan, was a self-financed 1905 college graduate and fraternity man, newspaperman, and sales manager of the Jeffery Car Company before raising the funds necessary to start his own automobile company. Today he is renowned as a promotional genius who in 1916 identified a wave of upwardly-mobile youth and sold them cars until his company went out of business in 1931. His “Somewhere West of Laramie” ad from 1923 (the cover image) is considered today to be one of the best automotive ads ever created, and it carried the company financially through hard times by increasing sales of the Playboy Roadster just when the rest of the product line was beginning to lose popularity. 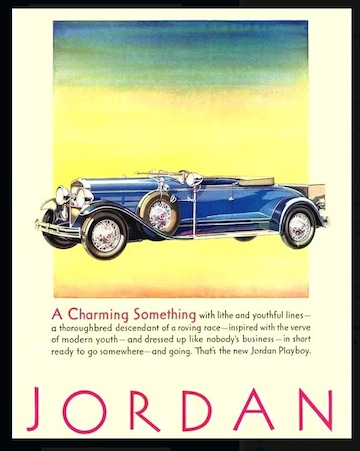 The author moves the Jordan story along briskly, not overindulging in unnecessary micro detail. The founding of the company, and the reason Jordan located the company where he did, is clearly sketched out. Lackey also gives a quick analysis of the automotive field of the time, showing us why Jordan positioned itself as it did—above Buick, below Cadillac. Unfortunately, a great deal of insider information relating to the rise and fall of his company was lost in a storage fire at Buffalo Bill’s ranch in Cody, Wyoming, destroying Ned Jordan’s personal collection of company documents.

Over 250 photos illustrate what the product line looked like and how it evolved over the 15-year lifespan of the company. Lackey contacted all the Ned Jordan descendents he could find to help fill in the company history and missing information on Jordan’s life and personality. A 16-page color section in the center of the book displays both the cars and a few of the truly beautiful full-color ads that look psychologically current even today. Wheel out the Jordan and wheel in today’s “smart luxury” cars like Acura, Lexus, BMW or Mercedes-Benz, update the typestyle and the young women’s clothing, keep the original provocatively snappy headline and the ad is totally at home in the 21st century. 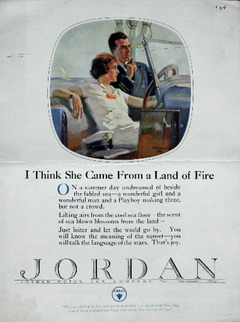 Ned’s ads were so sexually charged that Jordan’s 1927 “In the Middle of the Night” ad attracted the attention of the Society for the Suppression of Vice. It shows a Jordan Victoria parked in a romantic location and starts with “—when tiresome chaperons have gone to bed—and youth will have its fling—” ending with the tagline, “You simply can’t live always—and one night like this—well—.” Makes me want to buy one! Ned’s company was innovative in other ways as well, early on offering Certified Used Vehicles reconditioned to factory standards.

Despite all his creativity (or perhaps because of it) Ned Jordan’s personal and business lives self-destructed, and like many bold and dynamic automotive founding fathers, he faded away into relative obscurity, loosing much of his wealth by the time he died in 1958.

The book has Chapter Notes, 5 Appendices listing distributors and dealers, chassis and engine specifications, serial numbers and wiring diagrams, a Bibliography, and an inadequate Index. The author is a Jordan Register charter member and the Register’s long-time resident historian. He is also the owner of an award-winning 1923 Jordan Playboy that he restored himself. Although his background is as a construction electrician, his clear and direct writing style indicates his abilities extend into the literary side of life as well.

Anyone making their living in the automotive advertising business probably already has this volume in their professional library. If not, get it. “Resuscitating” a clever ad line or attitude from the past will more than pay for the book!

Forward: The First American Unsupported Expedition to the North Pole »
« Poetry in Motion: An Autobiography of a Supreme Grand Prix Driver