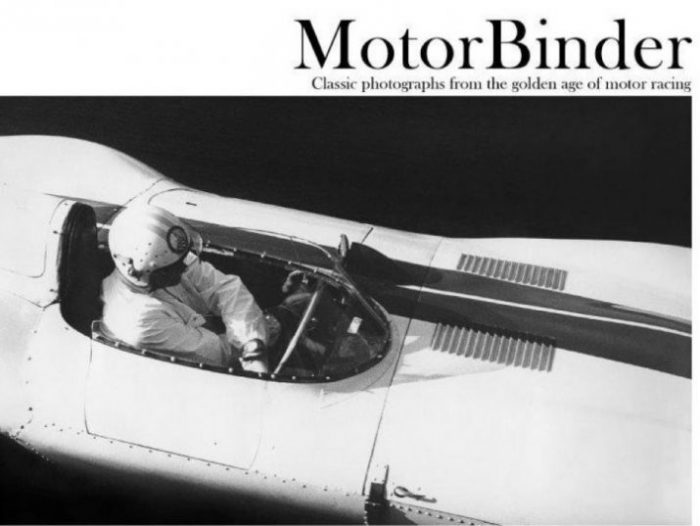 “Connections to the burgeoning sport surrounded me at home. There were petite Italian sports cars wearing Pininfarina, Vignale, and Scaglietti badges sitting in our garage, a den full of motor racing books, and visits from some of the men making news in the sport.”

Just what sort of charmed place did the author grow up in? It helps to have a car guy for a father. Who had a car guy for his father.

In recent years many motorsport scrapbooks have been published, mostly produced by established publishing houses, and some have been quite good, considering what they are. Most seem over-produced, and are a bit too slick to be considered true “scrapbooks.” MotorBinder is different. It’s more of an album than a scrapbook. It contains only photographs, no artifacts aside from a few facsimiles of documents, but it feels so authentic and personal—because it is—that the reader has the sense that he’s holding something made just for the author’s family and friends. Which is pretty much what author Roy Spencer, the volunteer “Spencer Family Historian,” has done.

In the late 1950s and early-mid 1960s American road racing was flourishing on the east coast (Watkins Glen, Bridgehampton, Lime Rock) and west coast (Riverside, Laguna Seca, Torrey Pines) and at airfields and road circuits scattered throughout the country. California racing in particular was energized by a group of “patrons” who recognized and cultivated talents such as Phil Hill, Dan Gurney, Richie Ginther, Carroll Shelby, and Dave MacDonald. For the most part these patrons were wealthy men who had financial interests in the automobile business and sporting interests in automobile racing . . . before racing too became a business. Among them were men who would themselves become legends, like John Von Neumann, Tony Parravano and the author’s father, Beverly Spencer (1917–1977).

Bev Spencer, the son of a Packard Motor Car executive, was a successful Buick and later Ferrari dealer in San Francisco with a taste for exotic motorcars, particularly Italian ones. The Spencer family lived in Hillsborough, a wealthy Bay Area community where the garage sheltered an array of impressive automobiles of the time: Ferrari 250 GTO, Maserati 151, Lotus 19, Ferrari 250 GT SWB, and assorted American sports cars and hot rods, among many others. A stable such as that would be valued today well into eight figures. Bev hired his cars out to others as well as hired drivers to race under his colors. He relished the friendships and reflected glory of the drivers who raced for him. This was an ambitious group who had their eyes on racing in Europe and Spencer provided the cars that would gain them the attention of the European teams. Not as flamboyant as the likes of Paravanno and Von Neumann but no less respected and influential, Spencer’s personal story-in-pictures is told in the final third of the book’s pages. His team always presented as professionals in clean uniforms, custom-liveried tow vehicles (or a gorgeous Buick Riviera tow car) and impeccably prepared racecars. Racing was a family affair for the Spencers, most of whom regularly attended races with Bev, fully immersed in the scene. Many family photos, at home and at the track, are included in this section of the book. Phil Hill was a close friend and frequent visitor to the family residence, regularly exercising on the streets of Hillsborough whatever delectable vehicles happened to be Bev’s garage that day.

As Spencer’s reputation and involvement in racing grew, so did the financial burden of the sport and its demands on Bev’s time. This was the era that preceded massive sponsorships and sophisticated management systems. Sadly, the financial strains of maintaining and fielding competitive racecars and paying first-rate drivers (Roy S. even offers a breakdown of expenses for a racing season, “Paying to Play,” below), exacerbated by the embezzlement of hundreds of thousands of (1960s) dollars from the dealership by an employee, led to the collapse of the Spencer enterprises. There was, quite literally, nothing left of it. Still, the family held together.

The reviewer has emphasized the parts of the book dedicated to Bev because the book is infused with the obvious affection that Roy has for his father. But in addition to that, the first two thirds are about the racing scene in general, especially in California, but also in Florida, the Bahamas and at other venues where Bev participated as an owner/entrant or had some other connection.

Many of the photos are from the archives of San Francisco Chronicle journalist and photographer Gordon Martin, whose collection the author saved after Martin’s death, and preserved and curated over a period of years. Other notable photographers whose work is featured are Pete Biro, Alice Bixler, and others.

The book is laid out in landscape format, typically with a full-page photo (almost all are black and white) on the right and the accompanying caption on the left. The captions are more satisfying than those in many similar books because the author provides a lot of detail and context which are all too frequently absent in photo captioning. Moreover, it’s one thing to dissect a specific photo and expound on just it, but, in most cases, Spencer casts a much wider net and draws attention to items not shown in the photo but relevant to it and thus tells a true insider’s story that may have something new to tell even the reader already fully steeped in the subject. To amplify this point, consider that he author has gone to the trouble of cross-referencing many photos by adding to a particular photo caption references to images elsewhere in the book that have a specific connection. Curiously, these references are only “forward-looking,” meaning an earlier photo will reference an upcoming photo but that other photo then does not list the “referring” photo. This has almost no practical downside—except that the browser who just flips through the book randomly will not get as full a picture as the reader who proceeds front to back.

Although this is a heavy book and only a softcover, the binding is up to the task and the book feels substantial and well made but you will want to treat it with extra care.

After organizing the family photos and the Martin archive the author set about considering publication of a book as a way of preserving history and honoring both Gordon and Bev. As a method of financing its publication he decided in 2013 on crowdfunding as a way of self publishing. This has become a useful vehicle for authors of books whose market appeal may be too narrow for mainstream publishers, or when an author wants to limit his personal investment in a project. Lest one think that this method is for unknown or meager talents, no less a legend than photographer Jesse Alexander crowdfunded his book, MONACO, The Golden Age of the Grand Prix, now out of print. (Alexander raised an astonishing $46,616 against a goal of $15,000; Spencer also quickly surpassed his target.)

Bev’s enthusiasm and dedication to automotive pursuits are perpetuated by Roy who is active in events around the country and is a recognized expert on Mercedes-Benz automobiles (restoration, sales), about which he maintains a web portal. This book is a photographic homage to Bev’s career in racing as well as his dedication to the sport and to his family. And the reader is invited along for the ride.

There is also a 2017 edition along the same lines, and, Spencer is sitting on enough material to produce any number of additional books if the market—aka YOU!—expresses a desire for it.

Classic Photographs from the Golden Age of Motor Racing