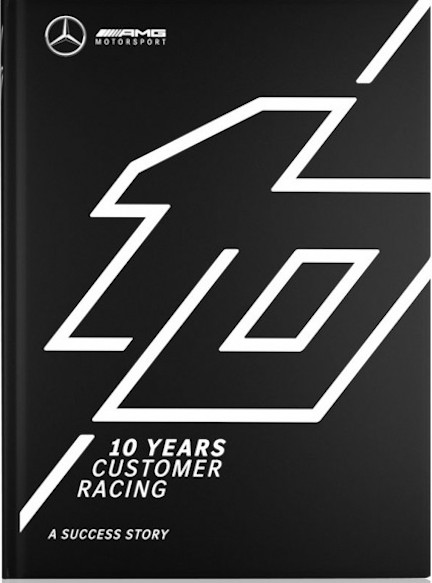 You can’t tell from the photo but the white elements are glossy thanks to partial UV spot varnish. The book is full of high-end production features.

“At the start of the new millennium, the FIA GT Championship became a competition for privateers and it had started to grow in strength and depth once again. The introduction of the Maserati MC12, a supercar in a field of GT cars, forced the series to develop the first Balance of Performance concept. This was designed to bring all cars to a similar level of performance by means of adjusting engine output, aerodynamics, vehicle weight, fuel tank capacity and tyre width. It has since been proven to be an effective approach as the GT racing platform has continued to grow with performance balancing at its heart.”

(German / English) This massively large book is a design tour de force and for that reason alone stands out. But thank goodness it is much more than that, offering insights into matters the title barely hints at. If the whole concept/purpose/merit of customer racing programs is a mystery to you, this book will enlighten. It doesn’t divulge all (say, the pesky matter of cost) but it probably will answer questions you didn’t know you had, from business model to logistics to a la carte services. Who knew a customer can hire an actual factory driver, or rent a race car. The latter is unique to the Mercedes-AMG program, inaugurated in 2010. 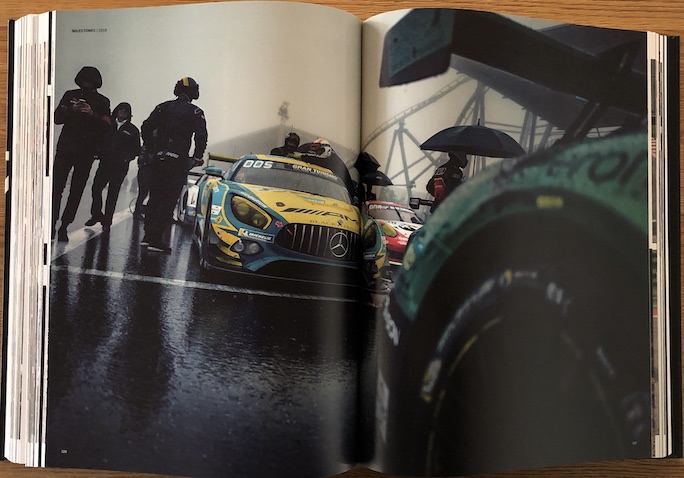 The book is FIFTEEN inches tall! And even though its 440 pages accommodate over 650 photos, many are big-big-big.

What is one quality you associate with Mercedes-Benz? Probably reliability, which is related to build quality which is related to engineering know-how and research and . . . you get the idea: it takes resources to deliver that, and M-B has done it at a high level and consistently. Anyone who follows Formula 1 but is not an M-B fan will now hang their head in despair. 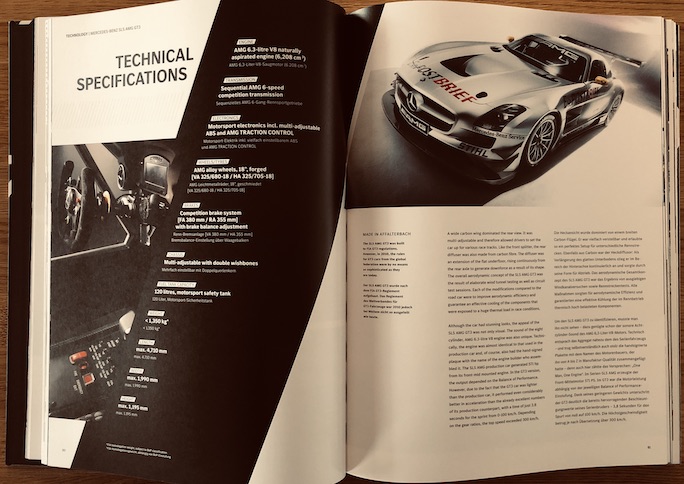 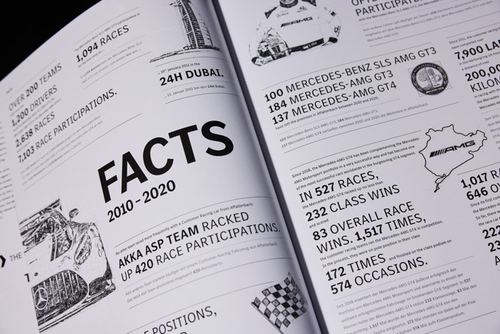 considered industry-leading. If this is news to you, take a peek at a spread fittingly entitled “Facts & Figures”, oddly relegated to the end of the book, that gives a basic albeit disjointed sense of scale. A key take-away: in 10 years over 200 teams have campaigned over 500 AMGs in over 7000 races. This speaks well for a symbiotic, constructive relationship between maker and racers. (Incidentally, motorsports historians of the future will be delighted to know that Mercedes not only archives all the data points, from grid position to points tallies, but makes them available digitally through a Customer Service Portal.) 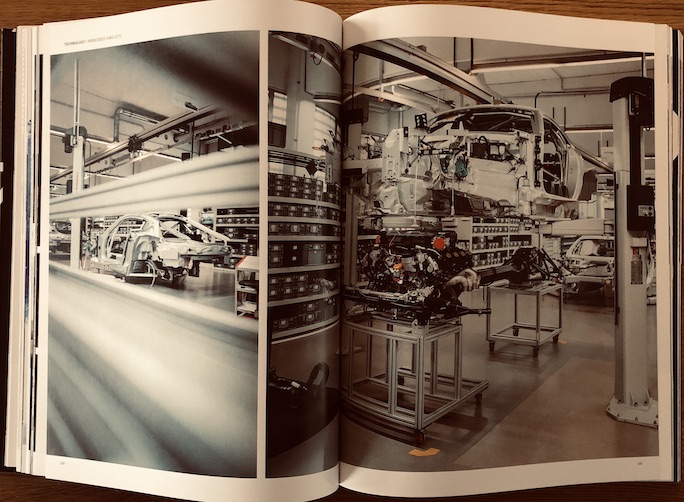 The introductory excerpt above is representative of the breadth and depth that saves it from being merely a PR exercise. There are two reasons for that remark: 1, the author of record is the agency that handles overall communications for the Mercedes-AMG Customer Racing Program. 2, assuming you’re starting to read at the front, it will take you a few pages of attentive, open-minded reading during which the pendulum will swing from one extreme to the other. Stick with it, it’ll all come right. 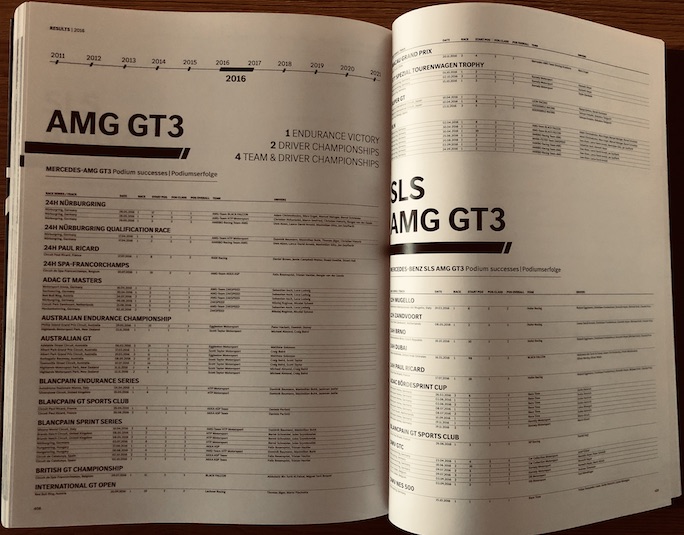 Ah, race results. If only everyone did it this thoroughly.

On the surface it’s straight-forward enough to grasp what this book will be about. There is no denying that it is not helping itself by being so circumspect about its raison d’être because the “drumroll, please” tone of the introductory pages will simply make people outside the AMG fold roll their eyes. That said . . . credit where credit is due. It would be understandable, and undeniably deserved, if Mercedes would take the ten year anniversary of its vastly successful customer racing program to tout the competence of its race cars, its cleverness in having brought AMG in-house as its high performance division in the first place, and the whole “racing improves the breed” school of thought. But all those factors have backstories, and the book delving into them will make it relevant to anyone with an interest in GT racing. 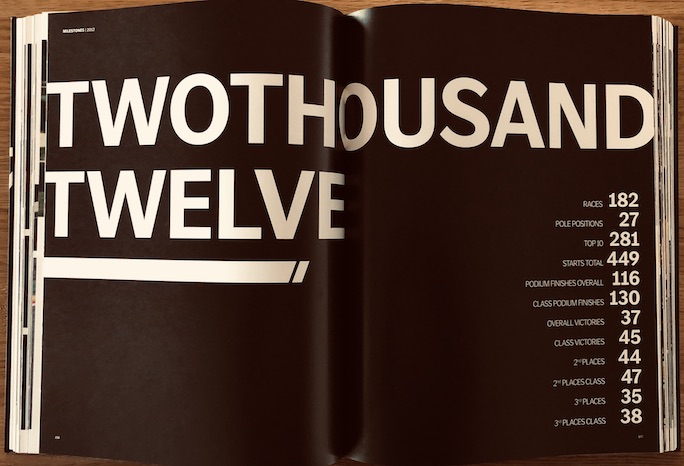 Chapter openers show key stats of the season at a glance.

No matter your automotive affinities, the AMG SLS coupe launched in 2009 was a tremendous car. By that time the fabled 1950’s 300 SL Gullwing that inspired it had long achieved cult status and the press especially saw the new Gullwing as a worthy successor and halo car. And it is because of that positive reception at the first press launch, with driving clinics and technical workshops at Laguna Seca, that Mercedes realized that there was momentum to produce a racing version of the SLS. The Customer Racing Program was launched then and there—before there was even a car. Developed in record time the GT3 was on starting grids by 2011.

The book begins with a recap of the AMG origin story and fleshes out all of the aforementioned talking points (supported by pages of interviews with key players) before turning to a technical discussion of the by now 7 different race cars (including special/anniversary editions). The bulk of the book then covers milestones of each season 2011–2020. The events are of course global, meaning there will be people and circuits that don’t have universal name recognition. 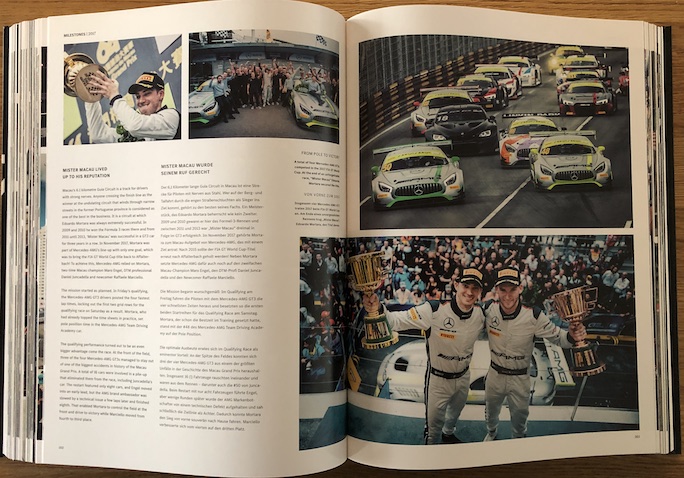 Ok, so you’ve never heard of Mr. Macau, or the Guia Circuit—that’s what books are for! 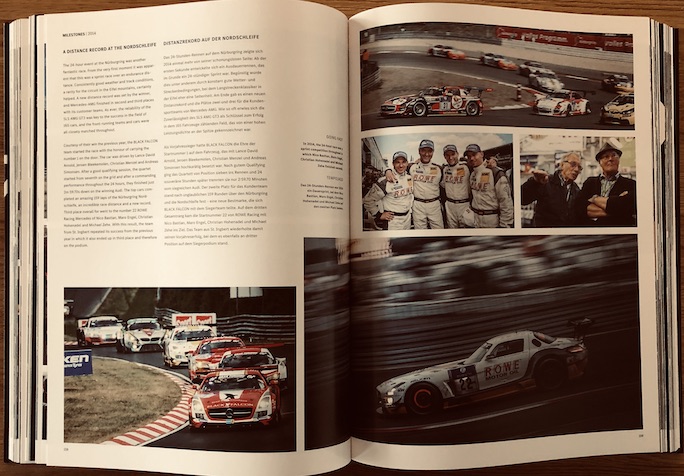 If this type of racing is now on your radar, know that Mercedes-AMG GT3s will kick off the 2022 season in January at the 60th anniversary of the Daytona 24 Hours (IMSA WeatherTech SportsCar Championship which will inaugurate a new PRO class) where the cars/teams are again podium candidates. 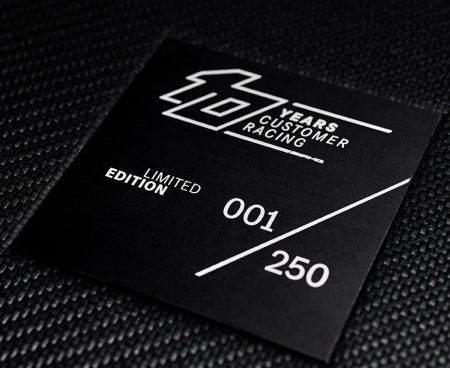 Also available in a numbered limited edition of 250 but only via a dedicated website where you can check/request remaining available numbers. Comes in a carbon-look slipcase with laser-engraved number on aluminum plaque, autographed by various drivers and AMG personnel, and a personalized certificate with your name (€450).

The book is produced by a German publisher with a clever name: Gruppe C Motorsport. No mystery what their area of interest is! Folks who worry about ordering from abroad should know that the book was very well packed.