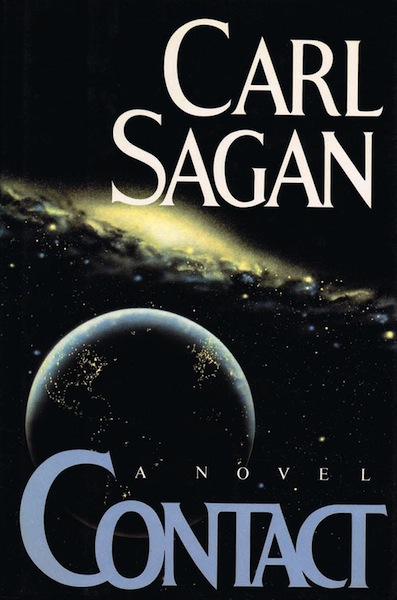 Science and its core tool the scientific method has wrested a great many answers from nature to let man know where he is and what he his, but it has struggled to inform man of who he is. All efforts to answer that question leads to this question: “Are we alone in the universe?” Should science one day yield an affirmative answer it would likely be the most challenging event in human history. Contact tells a fictional story of that event.

Carl Sagan (d. 1996) was an astronomer, astrophysicist and cosmologist, he directed the Laboratory for Planetary Studies at Cornell University, consulted on various unmanned NASA missions, and was a writer and popularizer of science. Sagan is probably best known for Cosmos (1980), the 13-episode television series and accompanying book that became the bestselling science book ever published at the time. He authored hundreds of scientific papers, and there were books before and after Cosmos, but Contact was his only novel.

A detailed plot summary would rob the author of the chance to evolve the story directly with the reader. It won’t be a spoiler (and you may know the eponymous movie anyway) to say that Sagan tells the story of Dr. Eleanor “Ellie” Arroway and her lifelong journey that culminates with her role as the talented astronomer and head of a SETI project (search for extraterrestrial intelligence) that receives a signal from an alien sender that leads to a journey to make contact. That this is a watershed moment—the realization that we are not alone in the universe would likely cause cultural, scientific and religious seismic waves—is not lost on Sagan, who rightfully capitalizes on addressing each of those aspects as he evolves the story. That evolution is also the evolution of the characters, the believability of the story and the dialogue, which is where Sagan, as a writer of fiction, must be appraised.

In addition to scientific themes, Sagan tackles very nonscientific themes: love, family life, religious values and haunts, and does so with proficiency but with arguably varying results in style that may well lie in the eye of the beholder. It is clear that Sagan’s style cannot be confused with Ondaatje’s, for example, but the subject of the story can be seen to provide a degree of “cover” for the sort of expectations for romantic seduction readers may seek in the prose of fictional writing. Here’s an example:

“Let’s see if I’ve got this straight,” he returned. It was a phrase of hers that he had adopted. “It’s a lazy Saturday afternoon, and there’s this couple lying naked in bed reading the Encyclopaedia Britannica to each other, and arguing about whether the Andromeda Galaxy is more ‘numinous’ than the Resurrection. Do they know how to have a good time, or don’t they?”

Sagan appears to be more comfortable with passages like this:

Those familiar with Sagan’s works, particularly Cosmos, will feel at home with the writing and will see the occasional “tipping of the hat” to elements of Cosmos—for example, in the passage above, choosing a dodecahedron for shape of the craft he described follows an entire dialogue of the five regular Platonic solids in Cosmos. These are polygons of regular sides (squares, triangles); where there can be an infinite number of polygons, there can only be five where the same shapes meet at each vertex. Four of these have mathematical attributes that allow them to be expressed as a fraction, a ratio, in whole numbers. This was philosophically seen to give these four “sound” and “right” attributes. Accordingly, it was conjectured in antiquity that these were the basic elements of the Earth (earth, air, water, and fire), but the fifth, the dodecahedron, could not be expressed as a simple fraction, but as an irrational number, which lead to a crisis of doctrine since it was believed that all things could be expressed as whole numbers, leading to the original definition of irrational: a number that could not be expressed as a simple fraction. Accordingly, the dodecahedron was associated with the heavens . . . Sagan probably couldn’t help but make it the shape of his cosmic vehicle. Cosmos also deals with extraterrestrial contact and the stigma scientists could suffer if they apply themselves professionally to the matter, which led to one of his popular quotes: “Extraordinary claims require extraordinary evidence.” When the subject of the alien signal is conjectured in Contact, Arroway speculates that it could be an Encyclopedia Galactica, a reference database of the known civilizations of the cosmos, which was the name and subject of a chapter in Cosmos.

Stepping further back, Sagan has always aimed to be a popularizer of science. Again, in Cosmos he largely links the destruction of the library of Alexandria to the lack of popularizing science in antiquity. The population at large did not miss the institution that created and housed most of the scientific revelations of the day—the destruction of which he described as antiquity’s “self inflicted radical brain surgery.” He clearly admired Johannes Kepler, whose three laws of planetary motion made him the first in human history to understand both, correctly and quantitatively, how the planets move, how the solar system works. Kepler wrote a work of fiction too; the Somnium (Latin for “The Dream”) that told the story of a trip to the Moon. While the book dealt with transport to the Moon by using mystical means, it was meant to be a work to popularize science, and Kepler really thought that when it happened it would be accomplished by “ships with sails adapted to the breezes of heaven with men that would not fear the vastness of space.” With Contact, Sagan follows Kepler’s lead as a popularizer. However, he spent some time thinking about how the space travel would be done, consulting with theoretical physicist extraordinaire Kip Thorne, who then postulated a solution that was used in the book involving wormholes that worked within theoretical physics, leading to the paper: Wormholes, Time Machines and the Weak Energy Condition, which Thorne wrote with Michael Morris and Ulvi Yurtsever in 1988.

Sagan’s style was marked by his use of carefully chosen epigraphs in his books—they’re used to strong effect in Contact:

Wonder is the basis of worship.

I maintain that the cosmic religious feeling is the strongest and noblest motive for scientific research.

The story of contact with aliens is the obvious subject of Contact, but the book does explore many forms of contact. Those unfamiliar with Sagan’s other work can’t appreciate the nuances previously mentioned (until now), and may even find progress in the storytelling labored as it explores all that it touches on, but Sagan does manage to bring all these themes of contact to feed and inform the book’s final and climactic scene. All is answered, all is known. It may be the finest and most satisfying ending this reviewer has ever read. Who are we? The answer is in making contact as is finally revealed in Contact.