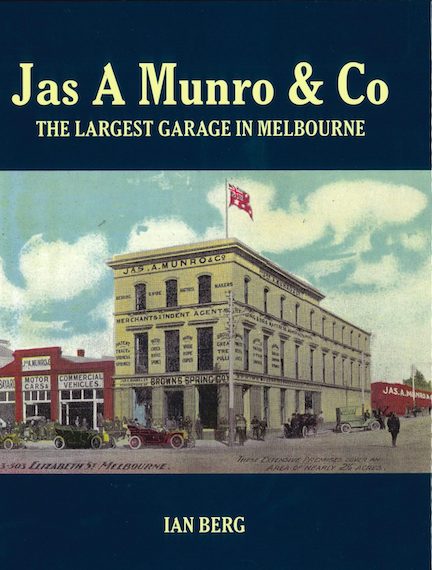 The understated title of this book doesn’t do it justice. Jas A Munro & Co – The Largest Garage in Melbourne is hardly tantalizing but don’t be put off, this is an interesting book on many fronts.

Author Ian Berg, a mechanical engineer by trade and active in the Veteran Car Club of Australia, weaves together three stories: the story of Australian entrepreneur James Munro, which in turn reveals the story of early motoring across the world, and the story of Melbourne, the rich, growing city in the south of Australia at the start of the twentieth century.

Munro was 26 when in 1891 he and his new wife Florence sailed from Scotland for a new life in Australia. Munro arrived in Melbourne with only a shilling in his pocket but he had brought all his coachbuilder and wheelwright’s tools. Like other immigrants to Australia over those years Munro might have arrived with very little, but he took advantage of every opportunity and, as Berg reveals, became a pioneer automobile importer as the motorcar became the favored form of transport, replacing the horse. He was also a canny businessman who made money from other businesses and invested wisely in property. 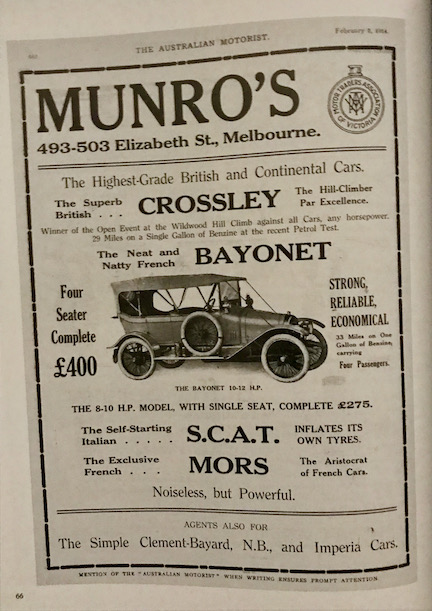 Munro’s business premises, located at the northern end of Melbourne city, adjacent to the main market, was finally acquired, after 104 years, by the city in 2014. In the building were the extensive Munro archives which had lain undisturbed for over a century. The author gained access to those archives which not only gave him the material to write Munro’s story, but also an exceptional collection of photos that have been carefully reproduced in this book. He has added further valuable pictorial content by sourcing material from state libraries, the archives of the press of the time, and even the National Library of France. There are two lovely reproductions of period advertisement on the first two pages of the book.

Munro imported cars from Belgium, France, Italy, England, and later the USA. It is interesting to read about the various developments of the motorcar across those early years: detachable wheels; a self-starter; the on-board ability to inflate tires; and an ignition lock. Munro was a keen seeker of publicity, entering his cars in hillclimbs and long-distance marathon events like Melbourne to Sydney, a test of endurance for any motorcar given the dismal state of the roads in the early part of the twentieth century. 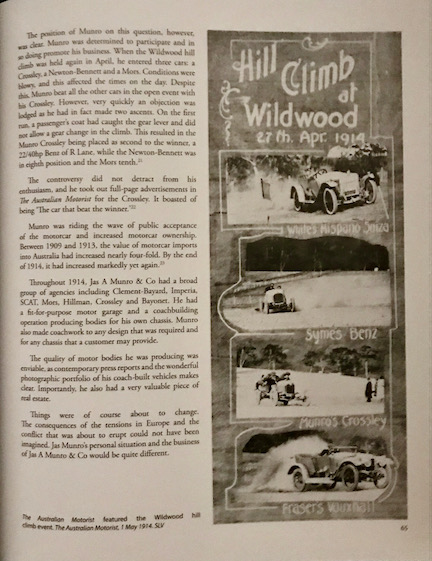 The author describes how World War One  impacted Munro on both a business and a personal level, while at the same time describing the part that motor vehicles played in that conflict. Again, the text is complemented by excellent photos.

This hardcover book looks good, its 11 x 9 inch size is not unwieldy but provides a good platform for the cover photo, pictures, and illustrations. Berg has judged this volume’s length well, keeping the reader engaged. There’s a detailed End Notes section providing the sources of facts cited and a useful Index.