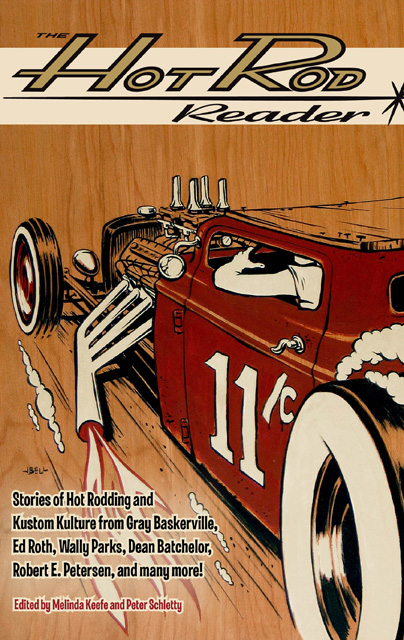 “Telling a fellow how to build a hot rod is just about as ridiculous as telling him what he should eat for breakfast. No two hot rodders have the same likes and dislikes and this is the reason there are as different hot rods as there are hot rodders.”
—Robert “Pete” Petersen, 1959

As one should expect of a good anthology, this compendium covers a lot of ground. It encircles its subject from all angles by presenting various commentaries by practitioners and observers. Representative examples of news articles, essays, fiction, and interviews have been gathered by the editors to help the reader connect the dots about what rods and rodding are all about.

From the contemplative (“They keep telling us we’re rotten!” —Ed Roth) to the practical (learn how to build a rod by practicing on model kits—Steve Magnante), if these 38 stories don’t answer your questions there may well be no answers!

It is surely no coincidence that the first article, from 1952 and by a Consulting Psychologist no less, goes right to the heart of the matter by asking the high-brow question: “Of what value, if any, is the hot rod to the furtherance of American cultural ideas and American individuals?” That and communism gave the Great American Thinker ulcers back in the day. The rather more low-brow answers examine addiction, aggression, and inferiority complexes before concluding, reassuringly, that hod rodding is“American and democratic.” Relief. This piece is cleverly followed by one from 52 years later that asks if rods have “historical importance.” You can see by these examples that hod rodding—more than pretty much any other kind of motoring activity—has been, and in some small way still is, searching for validation if not legitimacy.

Almost all the contributors here (be it as commentators or the ones being commented on) are of an age to have been around at the dawn of the movement (or just missed it by the width of a header gasket) and to read their thoughts years and decades into it makes for an interesting social commentary. Probably only the Hell’s Angels—and, by extension, motorcyclists in general—have had a similar identity crisis. On the less esoteric side, there are nuts-and-bolts nitty-gritty stories about anything from Bonneville racing to the merits of second-hand speed equipment to Jay Leno’s “Tank” rod with its 6-foot-long 30-liter V12 engine from an M-47 Patton battle tank. There’s even a glossary of drag racing lingo.

As so often with Motorbooks’ recent offerings, the design of this book is worthy of praise. Color, style, and artwork complement the topic—just take the cover as an example! Quotes and excerpts (what we publishing types call pullquotes), for instance, are adorned with “pinstriping.” Normally, book covers don’t get any prettier with use. This one not only has no dust jacket but is done in paper-covered boards, light-colored at that, and will probably get smudgy over time, which, considering the subject matter, will for once look entirely apropos.

Photographically there are no revelations here, nor are any needed in this type of book. Most of the photos are used on the chapter openers and very occasionally to break up the text. They are certainly interesting and suitable, but small and uncaptioned. Of much greater entertainment value are the eight cartoon-like illustrations (again, see the cover for an example) by John Bell. An Art Center College of Design grad he worked at GM’s Advanced Concepts Studios before getting into movies on the art direction/special effects side (picking up an Academy Award nomination and a British Academy Award along the way).

One issue worth criticizing is that the Table of Contents does not state the date of publication of the original articles; it is only given on the page on which the article begins. This precludes the reader who wants to cultivate an awareness of the chronology of the context, or read the articles in order, from doing so.

Fun. Cheap. Well done. Could one ask for more?

Posted Under: Automobiles, Fiction, US | Author: Sabu Advani | No comments yet

Original MGB With MGC and MGB GT V8: The Restorer’s Guide to all Roadsters and GT Models 1962–80 »
« The Book of the Lamborghini Urraco: Includes the Silhouette and Jalpa