A Drive in the Clouds: The Story of the Aerocar 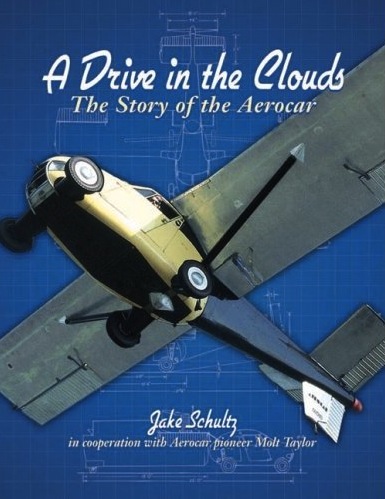 The book subtitled The Story of the Aerocar enticed me to spend an evening reading Drive in the Clouds since the arrival of my review copy. It did not disappoint. All too often writers of transportation articles and books do a fine job of telling the automotive/train/plane story, but fall short when trying to convey the human side. Not Jake Schultz. Readers of his book come to know the Aerocar’s creator Molt Taylor, his wife Neil, and lifelong associate Jess Minnick. Page after page the reader shares their hopes, feel their frustrations, and rejoice with them at their successes.

Aerocar is not a pipedream but a real, FAA-certified flying and ground-traversing, passenger-carrying machine. Five viable Aerocars were produced in the 1950s and all are extant today. So what happened? Over-simplified, Federal laws happened; like those specifying 5-mph bumpers, crash-testing and other mandates, all of which translated to increased vehicle weight. What is perfectly rational for a purely land-going vehicle (all that’s affected there is mpg) may not be okay for ones with wings. A land-going airplane might have avoided these mandates; but the operative word here is “might.” It’s a moot point anyway because the vehicle that Mort Taylor designed and developed is the Aerocar.

Taylor had additional ideas and designs for an Aerobus and an AeroJeep. What is particularly arresting with each of his designs is the detail, degree of development and practicality. Mort Taylor’s dreaming had solid foundations and his abilities and contributions were affirmed when he was honored and inducted into the EAA’s Hall of Fame in 1995. as it happened, Taylor died just months after the ceremony.

Today Aerocars can be seen are on display at the Experimental Aircraft Association’s Oshkosh, Wisconsin AirVenture Museum, the Museum of Flight in Seattle, Washington, and the Golden Wings Museum in Blaine, Minnesota. Two are in private hands including N102D, the 1956 Aerocar owned and flown by television star Bob Cummings (are you old enough to recall him?). Although none of the Aerocars are actively flown today, fully restored N102D can sometimes be inspected up close, having been trailered to a car show or concours by its proud owner, Ed Sweeney.

You can read the entire story of Mort Taylor and his Aerocars, knowledgeably told by an author, himself well-familiar with many facets of aviation. Schultz is a private pilot who has worked as a consultant at the Museum of Flight and as a Technical Analyst for Boeing. Although the book bears a recent publication date, Schultz notes that he began researching it over “a dozen years ago during a conversation with Molt Taylor…who along with his wife, opened up their lives and archives on which the book is based.”

And that book, A Drive in the Clouds, is commendable.