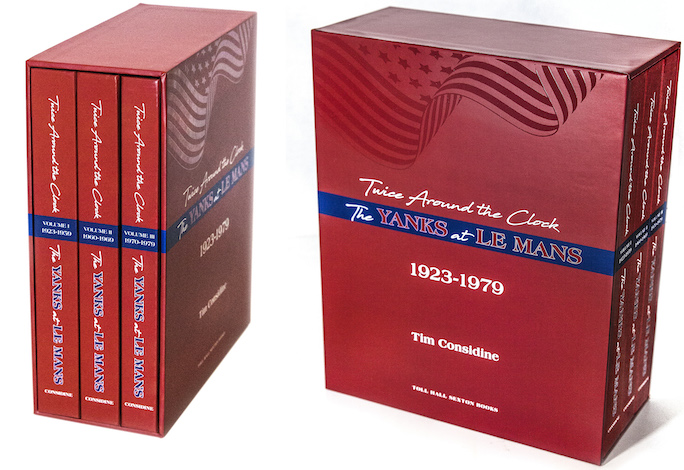 The Yanks at Le Mans has your attention from the moment it arrives simply due to its heft. The USPS postal sticker indicated a 17 pound shipping weight!

Opening the box reveals a strikingly handsome presentation. First, there’s the choice of colors and fonts. Then, tactile pleasure from the feel of the finish and the raised type of the laminated words on the covers to that of the heavyweight paper inside. And all of that is before you actually begin to read and look at what is printed on those pages.

Yanks arguably just might be one of the most significant motoring-sport history books—three volumes so far, boxed and sold as a set—to be published recently. The “so far” refers to author/publisher Tim Considine’s plan to tell the entire Le Mans story from “The Yanks” perspective of participation, accomplishments, and failures in this much-storied international motor racing venue.

Considine projects his Toll Hall Sexton Books company will release Volumes IV and V covering the decades of the 1980s and ’90s as a two-book set followed by another (third) boxed set containing Volumes VI and VII. Between them the last two will cover 2000 up to and through 2017 of Americans—people, cars, and teams—competing at Le Mans.

Considine’s naming of his publishing company speaks (ahem!) volumes itself. Consider this opus he’s in the process of writing and publishing. It’s very personal with him for he’s covered Le Mans as a working journalist and been present as an enthusiast. The recording of that history will be valued and respected for decades to come because Considine isn’t merely repeating statistics but has interviewed numerous drivers and team members to obtain their personal perspectives and then shared those stories on these books’ pages. Tim’s naming of his publishing company is his way of paying tribute to three of those “Yanks at Le Mans” heroes for the name is derived from the middle names of Phil Toll Hill, Carroll Hall Shelby, and Dan Sexton Gurney.

The books are organized just as life is lived, with one year following another and a chapter devoted to each year. Thus Volume I covers “The Beginnings” with the first competition of record in 1923 to 1959 with, of course, no chapters for 1936, and 1941 through 1948. Also there are no chapters for 1927 or 1934 simply because in those years not a single “Yank” car or person competed. Volume II is the decade of the ’60s and III is the 1970s. Page numbering picks up where a prior volume left off with 1095 the last page of Volume III.

Owners of this initial boxed set of Twice Around the Clock are provided the secret word (are you of an age to recall Groucho Marx’s secret word duck?) to enable access to additional information, photos and the errata pages. But visitors to YanksatLeMans.com already are afforded considerable information including sample pages showing off the attractiveness of the presentation and page layouts which Considine credits to graphic designer Jodi Ellis (who does most of the Dalton Watson books) as well as the summary tables and charts that conclude each chapter.

Considine’s writing skills shine and are especially notable when re-telling generally well-known episodes in Le Mans history. Consider how many thousands of words—entire books even—have been written about the racing tragedies of 1955. Yet Considine manages to put even the most knowledgeable reader right on the edge of his or her chair with his dramatic timing as he narrates the sequence of occurrences as they unfolded at half-after six on that June 11 evening at the Circuit de la Sarthe.

Likewise his telling of the following decade’s mid-decade run is equally riveting. Fords so promising and then fading…and one of those teams sees Masten Gregory’s teammate Jochen Rindt trying to leave the track before the race is over. Finding his car trapped in the car park, he finally goes back to the pits…and then they WIN! But, in Rindt’s absence could there have been/was there a (disqualifying) third driver?

Just as Considine was attentive to writing compelling narrative, he invested equal time and effort into sourcing the best images from collections and photographers everywhere. That list of sources is a who’s who of shooters that equals the who’s who of names of the Yank drivers, team owners and others. 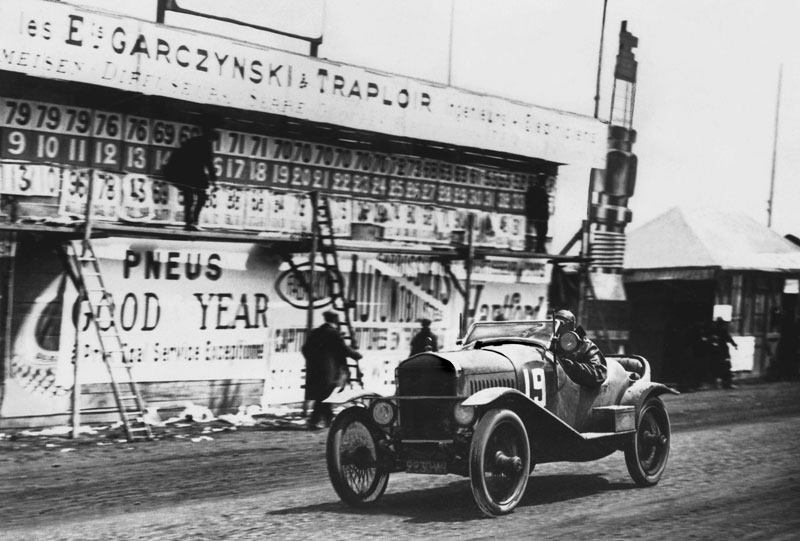 There’s this charmer of a Tin Lizzy (above) that was modified by a Parisian Ford dealer participating in the first 24-hour race at Le Mans. The image was found in the UK-based LAT collection. 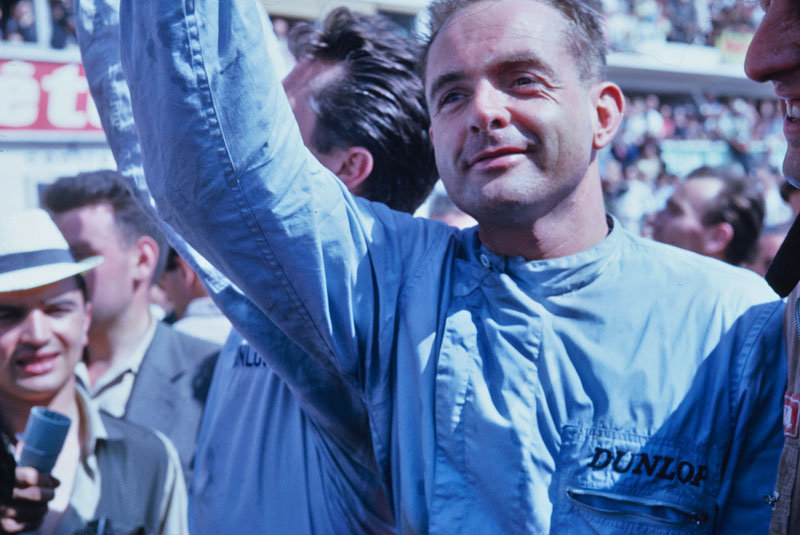 This next image of Phil Hill (or Pheel Heel as the French pronounced it) fittingly came from the Al Bochroch photos preserved and possessed by the REVS institute. Fitting on several levels; Bochroch was co-author with Dean Batchelor of the Briggs Cunningham biography and Considine’s first three volumes of YANKS has earned the Dean Batchelor Award for excellence in automotive journalism from its awarder the Motor Press Guild. And the REVS Institute was established by Miles Collier who figures large in Cunningham’s history. 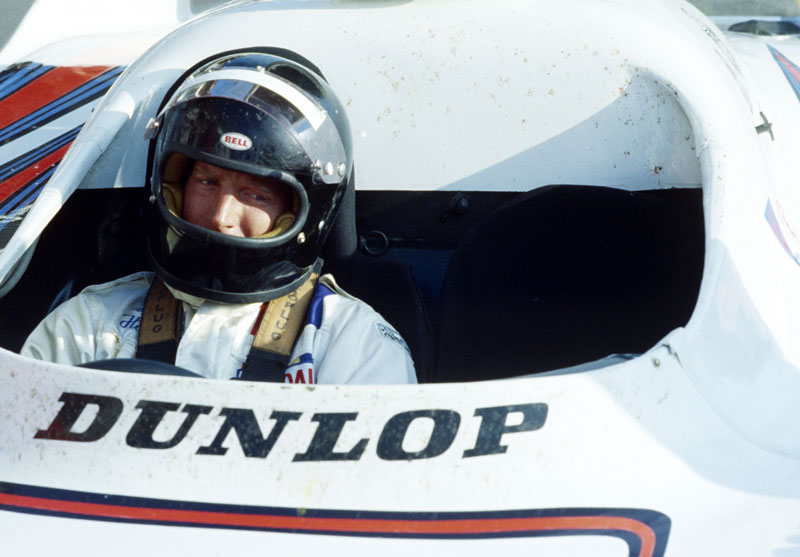 The Porsche archives were plumbed to find images such as this from the third volume of Yanks. It is of Hurley Haywood at his first-ever Le Mans in 1977 where, p.s. he also had never before been behind the wheel of a turbo’d Porsche.

You get it—this is a superlative set of books chronicling all the details—the facts, statistics and engineering—along with the human interest of The Yanks at Le Mans. And there is more to come. According to Considine, “The remaining volumes, IV and V (the ’80s and ’90s) and VI and VII (2000–2017) are being worked on now and will be released as two-volume sets as soon as possible.”