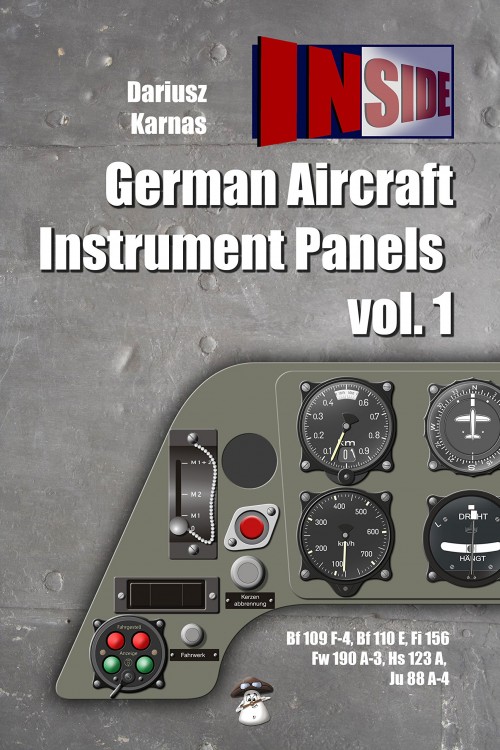 This first installment in a new series called “INSIDE” takes you, well, inside, in this case the cockpits of six German WW II aircraft:

It seems harsh to say this book is an answer to a question no one asked. Sure, modelers would ask for guidance in scratch-building and labeling instrument faces—but the answers they’re getting here are not totally reliable in regards to exactitude of nomenclature.

Even the English renditions of German words are dubious: there is no such thing as a “fuel contents gauge tank selector switch”! You can figure out what it is/does but you wouldn’t want to call it that. The German words are slightly more on the money, except that there are misspellings, especially Umlauts and transpositions such as “ei” vs “ie” and also combined/contracted vs. individual words with the attending questions regarding capitalization. A seemingly identical lever that in one plane is called, probably correctly, a “fuel tank selector” is called “filter cock lever” in another. This is questionable because unlike, say, British aircraft of that time, German ones had a fairly standardized cockpit layout. The reason the reader can’t be certain of what is what and where is that this book depends on drawings that are based on photos and handbooks. 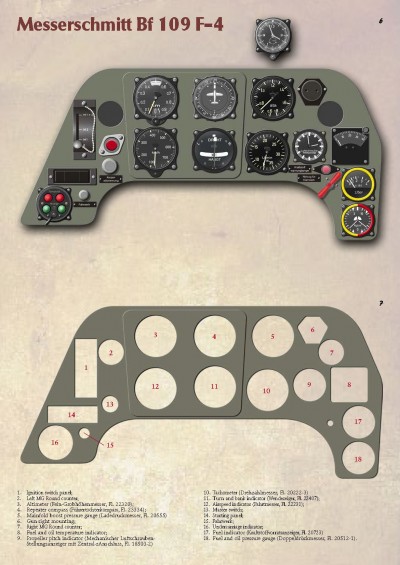 While photos and pages from handbooks are reproduced here, the former are usually small and fuzzy and the latter entirely unlabeled.

The way it works: The book is in landscape format. Each aircraft is introduced with a few general comments and one photo of the aircraft and a photo or drawing of the cockpit. Neither is ideally suited to the task: some of the aircraft are shown in close-ups or from odd, and oddly cropped, angles instead of the whole machine; the cockpits don’t show overhead or side armatures and in one case only the backseater’s instruments are shown. The next page shows a full-page colored drawing of, for lack of a better word, the main panel. (The very first one contains misspellings so already the head-scratching begins.) This is followed by a silhouette of the panel in which [almost] all the instruments are replaced with numbers that correlate to a legend in English and [most of the time] German printed at the bottom. Compare item 13 [and the red button above] and the unnumbered hole to the right of 17 on the pages reproduced here. There is no one-for-one match! 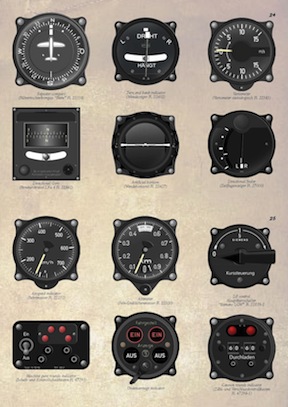 Another page then shows close-ups of most instruments with their English and German names, the latter mostly with parts/requisition numbers.

In same cases, ancillary equipment is shown such as gun- or bombsights. But do realize that not every cockpit control is depicted (cf. canopy ejector, trim wheels etc. etc. or, for that matter, the stick which usually has controls on it too) so if you want to recreate an entire cockpit, you’ll have to go to a museum or something.