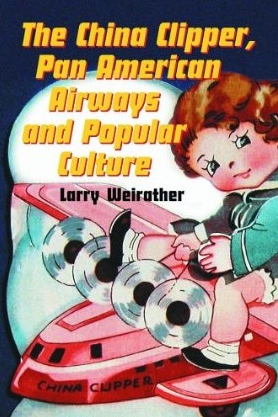 People unfamiliar with the majestic Clippers may find the title contrived—flying boats and culture? The author likens their cultural impact to that of the moon landing. There really is not anything analogous nowadays so readers will have to allow the book to take them to a point they may well find odd at the beginning. If the pop culture context doesn’t grab your attention, perhaps the political angle will—the Clippers as America’s calling card in all the corners of the globe as an embodiment of this most uniquely American concept: Manifest Destiny. Bet you never put those two things together!

Weirather, on the other hand, has been applying his mind to this matter for a long time.

“The meaning of the China Clipper is complicated in the way it reveals and combines so many of our bedrock beliefs, which are, in themselves, often contradictory.”

He is one of the original members of the Popular Culture Association and has written on such topics in The Journal of Popular Culture, The Popular Culture Review and elsewhere. Moreover, as professor emeritus of English and Humanities (Rocky Mountain College, Clark College) he has an academic’s methodical mind. After developing an interest in the China Clipper while still teaching, he has since amassed a 25-year collection of ephemera—and it and his research into the history of the Clippers, especially at the Foynes Flying Boat Museum in Ireland, have resulted in this book.

Not all the Clippers were majestic, of course. The three “main” ones—Sikorsky S-42, Martin M-130, Boeing 314—most certainly are. If you’ve ever seen or, better, yet heard one, the throbbing of their giant radials vibrating every molecule in your body, their almost ungainly looking uncommonly deep fuselages making them look more like the ship out of water that they are instead of a sleek cigar-shaped airliner, you’d be moved to poetry. There’s quite a variety of civilian and military amphibians that officially and unofficially bore the Clipper moniker; Pan Am even crewed some of military ones during WW II.

Concrete runways were expensive and rare in the 1930s and the whole idea behind flying boats was to take advantage of the world’s free and plentiful oceans and waterways as their runways, and also to be able to reach destinations to which land-based planes simply had no access. It is easy enough to see how the novelty of this means of travel would capture the public’s imagination and be reflected in the usual ways in which the public then expressed itself: advertising, music, film, travel posters, magazines, books and also pulp fiction, comics, toys, clothing, beverages, coloring books, puzzles, and art deco. All this is examined here.

Much less obvious is the role of the Clippers in nation-building and also the role of Pan American Airways as ambassador to the world and as an explicit instrument of American politics. Likewise the emotional, philosophical, and pragmatic connection to the nineteenth-century clipper sailing ships is made. All these aspects are examined in detail and will provide interesting discoveries. Aircraft enthusiast, student of pop culture, traveler and historian will each find something relevant in this book.

Not everything the multi-faceted text talks about is illustrated or, rather, could be illustrated. This is not for want of trying but for want of copyright release. Weirather is rightly critical of historical records being bought up by large firms that then charge large fees for their use. Even so, there’s plenty here to engage the mind and please the eye; the color photos are bundled into a stand-along 8-page section.

An Appendix shows the various amphibians in use by Pan Am. The Bibliography is quite extensive, and the Index of just the sort of depth a scholarly mind appreciates.

Le Mans 1960–69: The Official History of the World’s Greatest Motor Race »
« Life is a Highway: A Century of Great Automotive Writing