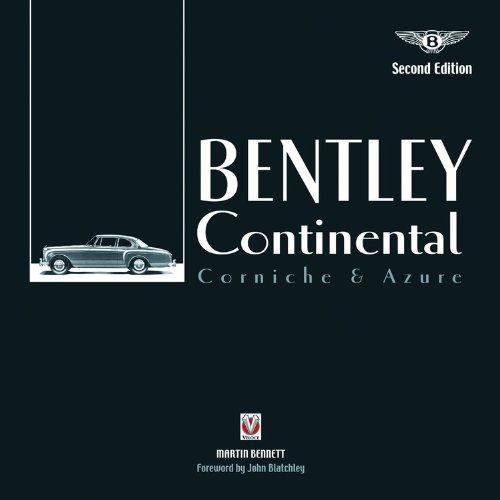 Of the various re-issues of this book in recent years this is now a true revision not just a reprint, some of which were done without the author’s involvement and, in at least one case, without his knowledge. First published in 1998, it is reasonable to assume that this book, in one of its iterations, will have found its way into any Bentley library worth its name. We will therefore not review this book as if it were new to the reader but devote a good number of words to what makes this release different from the prior ones.

First, and most obvious, would be the new, larger format and some 30 additional pages. A page-by-page comparison with the last edition in 2006 shows that only very minor text changes have been made although some of the photo captions have been changed. The technical specs are now shown at the end of each model’s chapter rather than in the Appendix. Among the 1991–2002 cars there still is no mention of the Continental SC, only the R/S/T and Azure. Oddly, nowhere in the book is even a hint of the fact that the names are being carried forward by the new owners (since 1998) of Bentley, VW Group.

The photos have carried over from the last edition but most of them are reproduced larger (or at least cropped larger to show more background) and there are several new ones, such as of Franay-bodied cars, several more/different shots of Hooper’s design 8512, and, for instance, Briggs Cunningham’s chassis BC4A. Most useful, the color photos that in previous editions were reproduced in bundled color sections interspersed at various points in the binding are now fully integrated into the flow of the text and now appear at the appropriate points. Some of the photos that once were in b/w are now in color. Many of the b/w photos in the 3rd ed. looked washed out and had a gray tint but are now shown with more contrast and definition. Further, there are additional reprints of road tests and ads. The Appendices remain as before but Appendix 4 “Car Listings” is no longer printed sideways.

The Index remains as meager as ever. It is exasperating to note that feedback sent already years ago to the publisher remains unheeded. One example, and this one was noted as early as the 1st edition: the Rolls-Royce Camargue is shown again (now p. 180) but is—again—not listed in the Index. Nor is “Cunningham” even though we are now treated to a photo of his car, BC4A.

For those who really do not know this title yet, we briefly summarize: beginning with the Embiricos and the Corniche concept cars, the book covers all aspects of development, construction, and coachwork on all the subsequent models bearing the name up to 2002. None other than Rolls-Royce Chief Styling Engineer John Blatchley, who wrote the Foreword, said he learned more about the very cars he himself had worked on from this book than from any other source! For what it does say, the book is a valuable compendium and thorough treatment of the nameplate . . . for what it lacks, even in this 4th edition, it remains as enigmatic as ever.

The review could end here.

All the objective criteria that would allow a prospective buyer to weigh the merits of the book have been enumerated. But there’s an elephant in the room. The book’s subtitle says it covers cars until 2002. Naturally, an author may choose whatever cut-off point for his inquiry he likes, and the purpose of these remarks is not to quibble with the author about where that point should be but to make a case for full disclosure: state your premise. Why 2002? Any reader with an interest in this specific model will know that since taking Bentley over in 1998, the stewardship of the new corporate parent—VW Group—has taken the brand to heights never before achieved. And this on the very strength of the “Continental” name. Three of the currently four, and soon five, models the firm offers are Continentals. But not even in a closing remark, or postscript, or footnote does this book so much as hint at the existence of these cars and the continuation of the name.

Let a book begin and end where it wants, but ought not a reader—especially a reader 20 years from now who may not know the minutiae of the past—expect of an author, for the sake of context, to paint a full picture? So why this arbitrariness? Bennett is on record as thinking that the new cars by the new company are not legitimate successors to the hallowed Bentley name. This is not conjecture on the part of the reviewer but recorded fact—just not recorded in this book. It is, among other places, recorded in the magazine of which Bennett was editor at the time the Vickers conglomerate of firms, the then owner of Rolls-Royce, which since 1931 included Bentley, sold the marque/s in 1998 at auction to VW (which became contractually obligated to relinquish the Rolls-Royce trademark to BMW in 2001). And in that magazine, the Rolls-Royce Owners’ Club of Australia’s Praeclarum, Bennett missed no opportunity, for years, to say that the proverbial sky had fallen and that Rolls-Royce/Bentley as we know it had ceased to exist. The transfer of ownership, to, incidentally, a non-British firm, constituted a demarcation line beyond which the cars could no longer hold claim to being philosophically, emotionally, or practically connected to their illustrious forebears. A more ecumenical scholar of Rolls-Royce history would of course point out that Rolls-Royce had bought its erstwhile competitor in 1931 with the specific intent of burying it, and had by the mid-1960s pretty much succeeded in robbing the Bentley brand of anything this meteorically important nameplate once stood for.

The V12 Engine »
« From Schoolboy to Station Commander