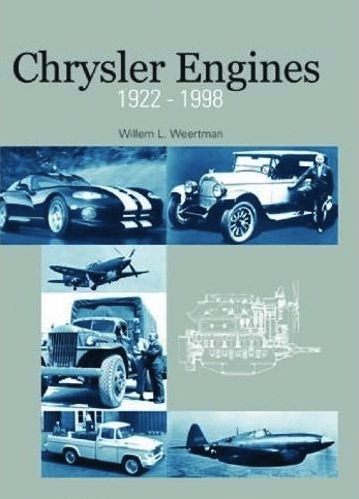 Even if you have only a vague awareness of cars you’ve surely heard of the “Hemi.” And you probably know there is such a thing as a “Viper” with its snarling aluminum alloy V-10 (modified by Lamborghini, then Chrysler-owned). Or the exotic Chrysler Turbine Cars of the 1960s. . . . This book puts it all in context.

Along the way of Walter P Chrysler’s (1875–1940) journey from floor sweeper and locomotive cleaner to captain of industry was a business trip to Chicago where he happened to visit the 1908 Auto Show. A railroad man by trade he was intrigued by the possibilities offered by the automobile, so much so that he bought himself at great cost a $5000 Locomobile—with the express purpose of taking it apart to learn its secrets.

Learn he did, and automobiles became his life. The cars that would bear his name were considered advanced, well engineered and affordable, and they still had that reputation when author Bill Weertman joined Chrysler in 1947 as a graduate engineer (Yale) and entered the prestigious Chrysler Institute of Engineering to acquire a Masters degree in automotive engineering. He spent his entire professional life with the firm, first becoming upon graduation a permanent member of the Resident Engineering Staff at Plymouth Lynch Road assembly plant and ending his career in 1987 as Chief Engineer of Engine Design and Development. Even in retirement he spent another five years as a consultant, which resulted in his involvement with Chrysler’s marquee car, the Viper.

Who better then to record the definitive history of three quarters of a century worth of notable engines. Written from the perspective of the consummate insider and by someone who obviously enjoyed his work, Weertman has produced an obviously technical work—tables, data, graphs, drawings—but the human factor is presented as well. The origins for this book lie in a proposed, but later cancelled, book following the 1998 merger of Chrysler and Daimler-Benz that was intended to record each partner’s engineering legacy. It was Weertman who had been approached by the Walter P Chrysler Museum to produce short summaries of their engines. Even though the project was shelved (for reasons he himself does not know) his interest had been sufficiently piqued to want to expand his research and write a proper stand-alone book on the subject. An SAE member since 1955 he saw how good a job that organization had done on Graham White’s 1995 book Allied Aircraft Piston Engines of World War II (ISBN-13: 978-1560916550) and chose them as his publisher—which means it comes with the imprint and authority of one of the world’s key engineering organizations but it also has the typically austere SAE look: smallish photos, all b/w. (While completely different in scope and intent, do check out Legendary Car Engines.)

Presenting descriptions, images, specs and timelines, the book covers in chronological order all Chrysler engines including those made by outside vendors provided Chrysler was involved in them. It is bracketed, on the front end, by the engines that preceded the incorporation of Chrysler (1925) and on the back the five American Motors Corp. engines that were in production after that firm’s 1987 absorption into Chrysler. Little is said about experimental engines but there is a chapter on the brief gas turbine project. Also covered are truck-only, marine and industrial, and World War II military (tank, aero) engines.

The book is extraordinarily user-friendly inasmuch as the well-sorted Table of Contents is further augmented by a subsequent multi-page listing of all engines by type and a separate list in numerical order of all A-program codes (the latter mostly relevant to the researcher or engine historian who, by knowing that the numbering system rolled over in 1964, often struggle with telling an earlier from a later program using identical numbers). This along with the commendably thorough Index make all the detail in this book actually findable—not ever anything to be taken for granted and all too often the cardinal downfall of otherwise useful books. Additional cross-referencing within the text adds greater utility still.

Each engine family is accompanied by a table listing each engine’s basic structure in uniform manner: cylinder bore spacing, number of main bearings, valve operation drive systems etc. Whereas the photos may be small, the many sectioned drawings are quite large and while a good number of them contain callouts, there is no accompanying legend that identifies the parts. However, this is almost immaterial because the purpose of this book is an overall survey of engine development and methodology as opposed to an operational treatise. The captions are sufficiently detailed at any rate.

Appended are a table on 1961–76 emission control systems, chapter references, sources, abbreviations/definitions, and metric/customary conversions. To the extent that such a descriptor is applicable to a book such as this, the narrative is fluid, cohesive, and engaging. One could as well read this book cover to cover as use it a reference tool for looking up specific issues.