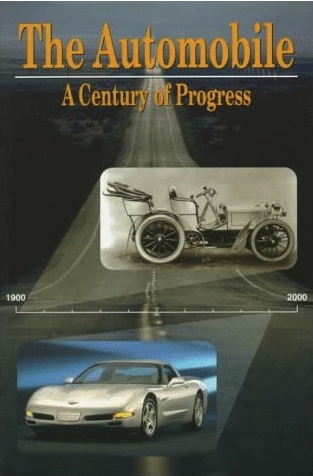 This book uses a systems approach to examine the history of the development of the automobile. Its 14 articles by 10 authors were originally published separately in the SAE periodical Automotive Engineering Magazine in 1995–96.

The systems approach is refreshing and very helpful for the kind of reader who desires a better understanding of the development chronology and detail of the various automotive systems. Many historical works put the development of these relatively complex subjects in pure chronological order—mixing various developments in different areas to meet the time line requirement. The result can be a disrupted train of thought for the reader when a given system is considered. This approach avoids that pitfall.

The articles cover powerplants, brakes, tires, bodies, creature comforts, safety, electrical systems, gasoline, lubricants, and materials. In very good form, many of the authors did an excellent job of providing the names and circumstances of the inventors and inventions. The origin of common automotive words like tire (from attire, or the clothes of the wheel) and dashboard (a board to dash away roadway rocks and mud) is prevalent, as is interesting history of the inventions of Charles Kettering, Vincent Bendix, Nikolaus Otto, Ben Goodrich, and many others. There is a particularly interesting picture of Charles Kettering working on his “self-starter” whilst halfway under a 1912 Cadillac.

While the ignition article omits some operating principles, it is particularly good and deserves special mention as it gives an unusually complete chronology of the various ignition systems before the world settled on the Kettering ignition—which is still in use today. Very interesting personal information is given as to why Henry Leland (head of Cadillac Motor Car Co.) asked Kettering to develop a starting system for Cadillac automobiles (a cranking accident caused the death of a friend of Leland).

The internationally minder reader can’t help but notice this is not a global history—perhaps to be expected in an American engineering society publication—but the fog at the Atlantic shore does seem to dissipate at least a few times.

There is, however, one nod to European influence: units of measure. To the American reader’s chagrin, the publication has been “metricated,” giving tire pressures in kilopascals, areas in hectares, and forces in newtons. To this reviewer, that seems hardly appropriate in a historical review—particularly for a conceptual, general-interest automotive book for the American audience, in a country where metrification has hardly been widely accepted and certainly not used by the American inventors whose contributions are discussed here.

Some of the artwork is reproduced poorly, and what could have been an outstanding section on gasoline suffered from poorly defined terms for a general audience.

In light of the cons, is this a book you would want to buy and read? You bet! There is much basic information that would be of value to nearly anyone interested in automoniles. In fact, this reviewer is of the opinion that there are two basic classes of technical books—those that genuinely tell the reader something s/he can really use, and those that don’t. This book is definitely in the former category.

Posted Under: Automobiles, History, Technology | Author: Other | No comments yet

50 Years with Rolls-Royce, My Reminiscences »
« The 1924 Coolidge-Dawes Lincoln Tour