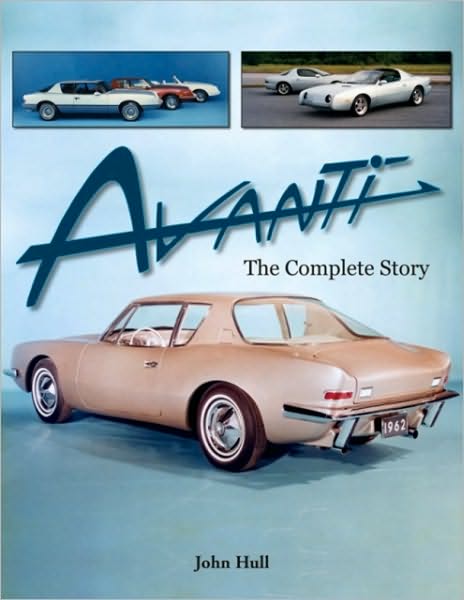 There have been a number of books that have attempted to chronicle the history and lineage of the Avanti. But until now few have given accurate or chronological details. Some on my bookshelf are merely pages and pages of already published magazine articles, while others simply gloss over the highlights and report nothing news.

That all changed with the release of this softbound 8.5” x 11” book by John Hull. Avanti: The Complete Story really does chronicle the history from the car’s earliest days at the Studebaker Corporation, including its being designed by a group occupying a rented house in Palm Springs, California, through the current day status in Mexico.

Hull writes with authority from firsthand experience as a former Avanti Motors Corporation executive, most recently as the chief financial officer while the company was headquartered in Villa Rica, Georgia. But he didn’t merely work for the company. Hull is an enthusiastic supporter of the marque as only a hobbyist can be and he pretty much spearheaded the Avanti 30th Anniversary Celebration held in 1993 in South Bend, Indiana.

Hull does mention that the title of his book is a bit presumptuous, as a truly complete history could take up multiple volumes. Within the 128-page limitation of this book, he presents an accurate overview of the “evolution of this incredible automobile and the cast of owners, characters, and fanatics it has attracted.” The eight chapters trace the car’s history beginning with Sherwood Egbert and Raymond Loewy’s first conversations and rough sketches. Anecdotes that only an Avanti insider would have known are told, and rarely seen original promotional photographs and factory advertisements are included.

There are details of Avanti manufacture by Studebaker. Then the phoenix-like resurrection of the car by two South Bend, Indiana businessmen, Leo Newman and Nate Altman, then new ownership by Stephen Blake, another arising from the ashes by Michael E Kelly and J J Cafaro, and the fade to black by 1991 when it was thought by most that Avanti was gone forever.

But then the very next chapter tells of how Jim Bunting got together with Tom Kellogg, the designer of the original Avanti, to create the AVX— an Avanti for the next generation. From the AVX comes the rebirth in Georgia, which is followed by a new chassis and the company relocation to a new (for it) country, Mexico.

For the historians, Avanti’s year-by-year Avanti production is provided. Data includes build dates by model, ownership, production totals, starting and ending serial numbers from the 1962 beginning through to the more recent 2007 models. This production data chart alone is worth the price of the entire book.

In my opinion John Hull is one of, if not the, most knowledgeable people regarding Avanti in existence. He certainly has the most extensive collection of Avanti memorabilia of anyone in this country.

Today is the Avanti gone for good? That’s anyone’s guess. However, after reading this book, in which you’ll learn that Avanti was believed down for the count numerous times before, only to return—well, I’m not sure it’s wise to count Avanti out just yet. Like the phoenix, it just might return again.

Copyright 2010 (speedreaders.info) Adapted with permission from review written by Lewis Schucart, published in Winter/Spring 2008 issue of Avanti Magazine.
(Reviewer Schucart is a professional newspaperman with a major city daily paper and also editor of Avanti Magazine, the official publication of the Avanti Owners Association.)

Big Sid’s Vincati: The Story of a Father, a Son, and the Motorcycle of a Lifetime »
« Porsche 908: The Long Distance Runner